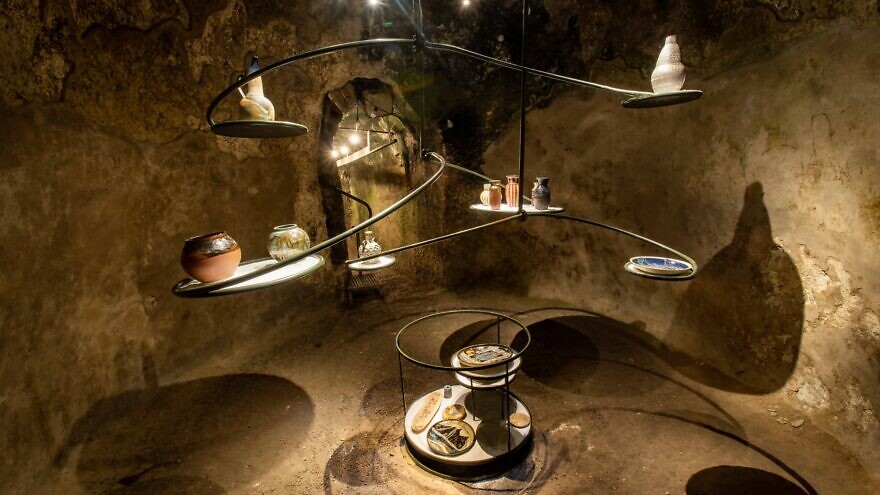 Some of the ceramic pieces by Israeli Canadian artist Nicole Kornberg Jacobovici that make up “Arteology: The Power of the Ancients in Contemporary Form,” Oct. 11, 2022. Credit: Eric Sultan.
Republish this article
732 WORDS
Spread the word.
Help JNS grow!
Share now:

(October 13, 2022 / JNS) Contemporary art might not be the first thing on the minds of visitors to the remnants of ancient Jerusalem, but this Sukkot a ground-breaking exhibit brought art and archaeology together 20 feet under the Western Wall.

“Arteology: The Power of the Ancients in Contemporary Form,” features 27 ceramic pieces by Israeli Canadian artist Nicole Kornberg Jacobovici. The unique exhibition is the first to be displayed in an active, subterranean Israeli archaeological site.

Visitors enter via the City of David, walking underground through the excavated streets and drainage channel of Second Temple Jerusalem and exiting via the Davidson Center to find themselves viewing colorful and symbolic vases, plates, disks and seals artfully displayed in a historic cistern next to the monumental, 2,000-year-old foundation stones of the Western Wall.

The exhibition was made possible by a partnership between the Israel Antiquities Authority (IAA), the City of David, the Company for the Reconstruction and Development of the Jewish Quarter in Jerusalem and the Jerusalem Biennale.

While the ceramics will only be on view in Jerusalem during Sukkot, the exhibition is designed to go on tour internationally. Renowned photographer Eric Sultan has captured the exhibition in situ with the intention to use these images as massive backdrops to the traveling exhibition, to help recreate the unique site in which it was first displayed.

Talks are underway to take the exhibition overseas, including to Greece, Japan and Italy. The project is under the framework of the Jerusalem Biennale, whose goal is to showcase the city’s rich history and culture through the prism of contemporary art.

At the opening, Jerusalem Biennale founder and director Rami Ozeri told visitors, “Art in Jerusalem is always site-specific. Every place in the city carries with it, for good and for bad, hundreds and thousands of years of history and traditions. We have this amazing opportunity to connect the magnificent ceramic art by Nicole with the foundations of the most important ancient structure of this part of the world. This connection is magical both aesthetically and symbolically.”

Renowned archaeologist Yuval Baruch, director of the Jerusalem District of the IAA, has been excavating at the City of David and Temple Mount since 1997. “We’re very proud to provide this special space for Nicole’s ceramics exhibition. This space was part of the water system of Jerusalem, some 2,700 years ago. It’s the first time in Jerusalem we’ve had an art exhibit in an active archaeological site. I sincerely hope it’s not the last time. In many respects, archaeology’s “language” is based on pottery. That’s why we decided to deal with ceramics. It’s an ancient raw material that has accompanied human civilization since its beginning,” he said.

“Nicole’s ceramics are particularly appropriate because it’s contemporary art that echoes ancient forms and methods. This dialogue between past and present shouldn’t just be a matter for archaeologists. It should involve the general population and that’s what we’re trying to promote,” Baruch said. 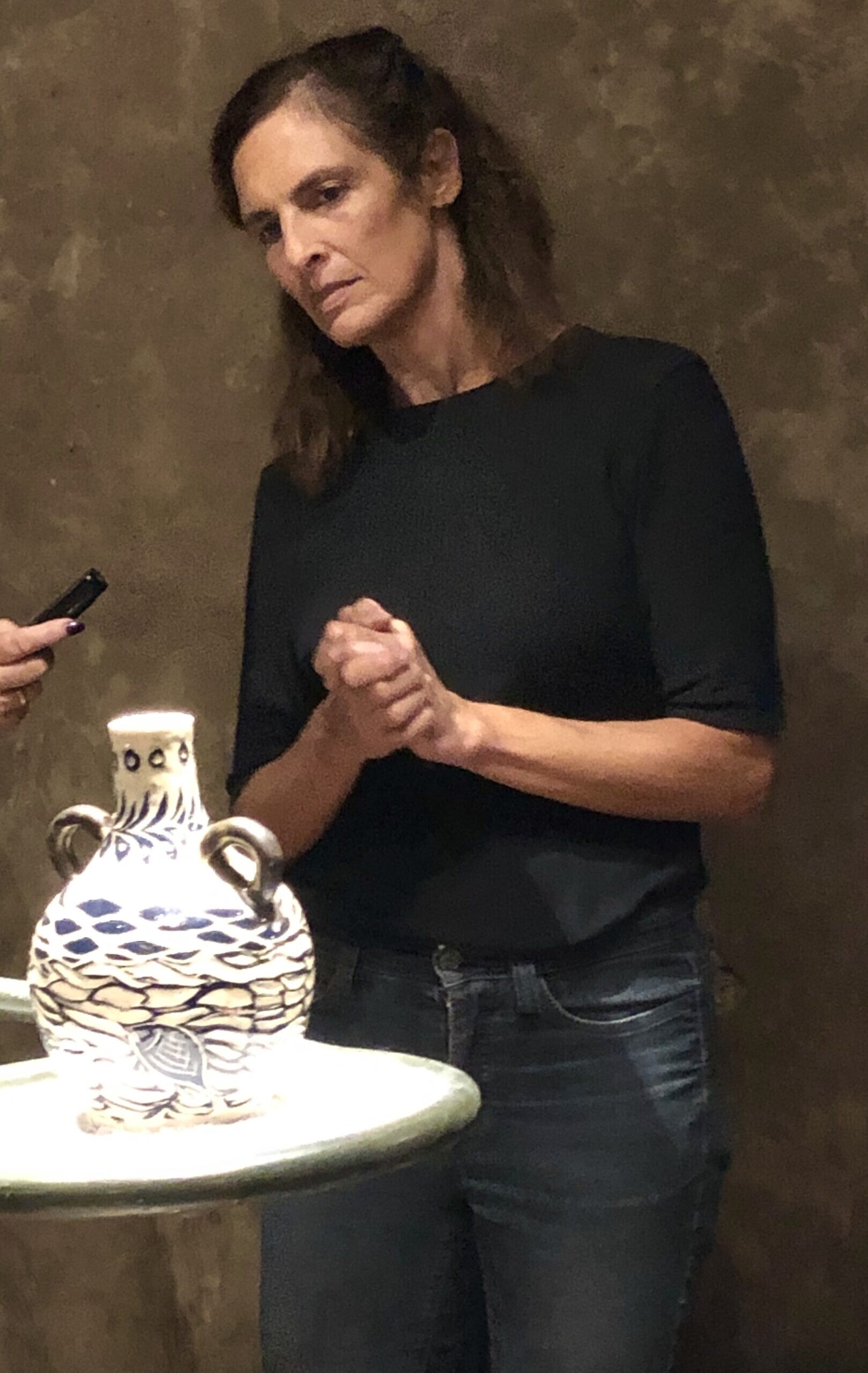 Standing in front of the multi-layered display of her work, Kornberg Jacobovici said the inspiration for her pieces on display leans on biblical, cultural and historical themes and motifs, from sources as varied as cultures present 5,000 years ago along the Aegean Sea to the Israelites in Egypt and the Etruscans in ancient Rome.

“Throughout history, clay has been used to contain the objects of our lives—food, water, coins, jewelry, scrolls—the objects that sustain us. It is through our continued relationship with clay that we can connect to ourselves, our history, and cultures of the past,” she noted.

“Ceramics carry the energy, aesthetics and the hand of the maker—sometimes preserving the actual fingerprint of the artist. Ceramics reflect a moment in time. Placing my pieces within an active archaeological site allows me to have a dialogue with the ancients and, in a sense, with people of the future, since this site reminds us that these pieces too will one day be archaeology,” Kornberg Jacobovici said.

Baruch told JNS he is optimistic that the juxtaposition of contemporary art and archaeology will be a bridge that brings people to a greater understanding of the meaning of the ruins and the multiple layers of Jerusalem.

“Archaeology is part of the cultural environment of the city. It’s important to develop new ways to bring that to the public. This is a kind of pilot project,” he said.