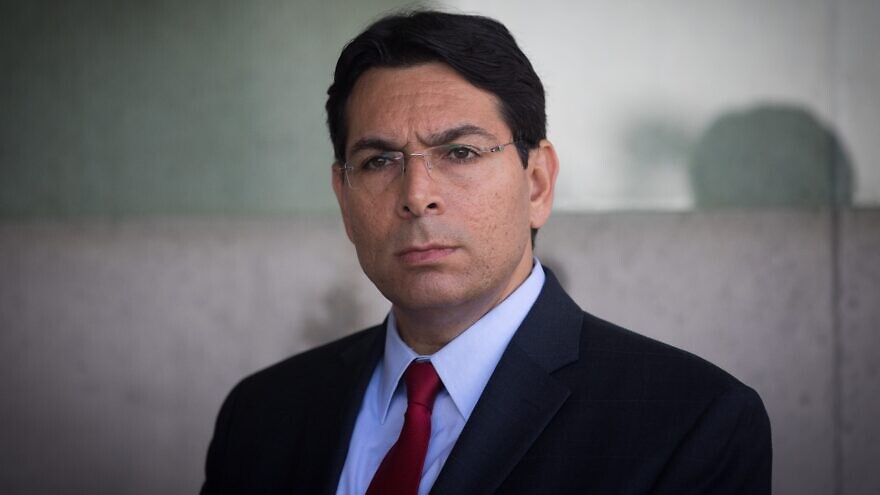 (May 20, 2022 / JNS) In the decade that separates the two books that former ambassador to the United Nations and current chairman of World Likud Danny Danon has written, a lot has transpired. Having served as a member of Knesset from 2009 until 2015, including as deputy minister of defense and as minister of science and technology, Danon was then given his role at the United Nations. Working in the infamous world body that has made Israel a focus of obsession, Danon was faced with diplomatic warfare, behind-the-scenes hostilities, unexpected camaraderie and secretive friendships.

He served for five years as Israel’s ambassador to the United Nations—from 2015 to 2020—and, in his words, gained experience and a perspective he did not have before.

Danon wrote his first book, Israel: The Will to Prevail, in 2012, even before he took on the diplomatic role. His new book, In the Lion’s Den, highlights his personal relationships and interactions with key figures, as well as how he navigated between Israel’s former prime minister, Benjamin Netanyahu, and Obama administration personnel on key policy issues. He also writes about the evolution of Israel’s U.S. relationship from the complications of the Obama administration to the strong alliances with the Trump administration.

“This new book is a more sophisticated version of the 2012 book, but the core values are the same,” he told JNS.

The book presents readers with a roadmap of Danon’s views as to how Israel can succeed in the future—from spearheading the global tech revolution to taking pride in its identity as the only Jewish state.

The forward, written by former U.S. Ambassador to the United Nations Nikki Haley, highlights the working relationship she had with Danon, as well as the special partnership between America and Israel when they faced challenges together.

In his book, Danon demonstrates how he used a diverse toolkit and array of techniques including a dose of chutzpah to navigate the U.N. environment. For example, when the Trump administration announced in 2017 that it would be moving the U.S. embassy from Tel Aviv to Jerusalem, Danon wanted to explain why Israel supported the move and thus felt he needed to do something memorable.

He managed to have a valuable coin from the Great Revolt, minted in the old city of Jerusalem in 67 A.D., sent to him immediately from Israel. The coin dates back to the second year of the Great Revolt when the Jews rebelled against the Roman Empire. One side of the coin reads, in Hebrew, “Freedom of Zion,” and the other reads, “year two of the revolt.”

The plan was that while Danon showed the original coin from the podium, interns from the Israeli mission would give each ambassador a replica of the coin accompanied by a written explanation about it. Before taking the podium, his chief of staff informed him that U.N. protocol banned the distribution of anything during a speech.

“Today, we fight for Jerusalem, and we don’t follow protocol,” Danon told him in response.

According to Danon, “The idea that in diplomacy you avoid directness is not my philosophy. I believe in telling the truth. When I was disappointed in countries and peoples, I would tell them directly. When it came to a point where one would apply a double standard regarding our right to self-defense, blaming Israel for using ‘disproportionate force,’ I would expose my critics for what they were. Hypocrites.” 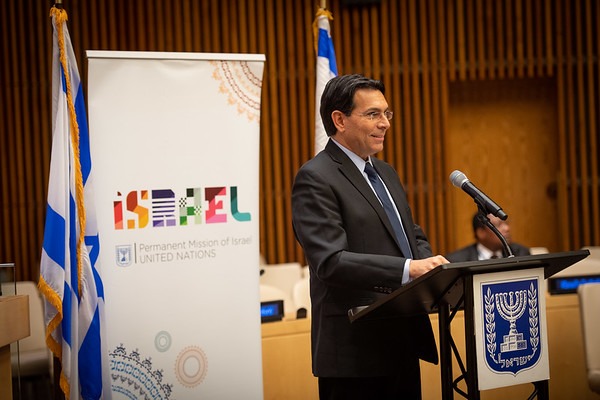 In contrast to using chutzpah as a tool, sometimes finesse is required to resolve sensitive issues. Danon said he often found himself speaking with world leaders, “and you need to think about answers on the spot and be respectful.”

In one instance, he said he had a sensitive conversation with Russian Foreign Minister Sergey Lavrov about a topic that Danon said would be checked immediately.

“Sometimes, even though it’s diplomacy and you think you know everything, you have to be ready for surprises,” he told JNS.

Danon also recalled his experience in dealing with the crisis surrounding U.N. Resolution 2334, when the United States and other countries presented an anti-Israel resolution that accused Israel of violating international law in Judea and Samaria, and deemed the Temple Mount—Judaism’s holiest site—“occupied Palestinian territory.”

Danon emphasized the role of then-U.S. Secretary of State John Kerry and U.S. President Barack Obama in crafting the resolution, and how they worked diligently behind the scenes to make it and its passage a reality.

“The U.S. backing of the resolution was his administration’s parting shot,” he wrote. “Ultimately, the U.S. facilitation of the resolution’s passage did not support the peace process and only hurt President Obama’s legacy.”

Danon also addressed relationships he developed with many ambassadors, some from countries that have no diplomatic relations with Israel.

“What many people don’t understand is that there is a public U.N. and a private U.N.,” he wrote. “The public face of the U.N.—at least, when it comes to Israel—is aggressive and bullying. But privately, you can build bridges, forge friendships and create a space for understanding, particularly if you are transparent.”

Danon wrote that he took it upon himself “to foster as many friendships with fellow ambassadors as possible, including those from Muslim countries. In terms of national security, this bridge-building is imperative. Today, many of these ambassadors are very close to me, and I consider them allies. … The one issue about which we all worry is the challenge of dealing with radical Islam. As a result of this mutual interest, we have cooperated with each other to block Iranian hostility in the region.”

“Indeed, most of the Arab ambassadors with whom I have built relations have a genuine curiosity and interest in Israel,” he added. “In many cases, they admire us—in large part because we have not backed down from our positions, we have built an amazing nation, and we are an unapologetic Jewish state.”

Danon’s tenure at the world body also saw a number of firsts many thought were near impossible. He was elected chairman of the U.N. Legal Committee, the first Israeli in that position. He brought Judaism to the United Nations in unprecedented ways, including facilitating the inclusion of kosher food in its cafeteria; recognizing and celebrating Jewish holidays; and promoting and encouraging the purchase of Israeli innovations and products by the United Nations itself.

“I tend to be very optimistic, even after five years at the U.N.,” he said. “The main message of the book is that we have friends out there, and we need to reach out to them and build bridges. [For example], there are African countries that are willing to do more with Israel, and we can do much more.”

He continued, saying “in order to continue to live safely and achieve lasting peace, we should continue to seek new partners in the region, and around the globe while maintaining our autonomy.”

Looking to the future, Danon said he hopes to re-enter public life in the next election, and bring his knowledge and know-how into action.

“It is important to have someone who is capable of presenting the ideas that we want to implement to the world,” he said. “This is what I am doing with the book.”