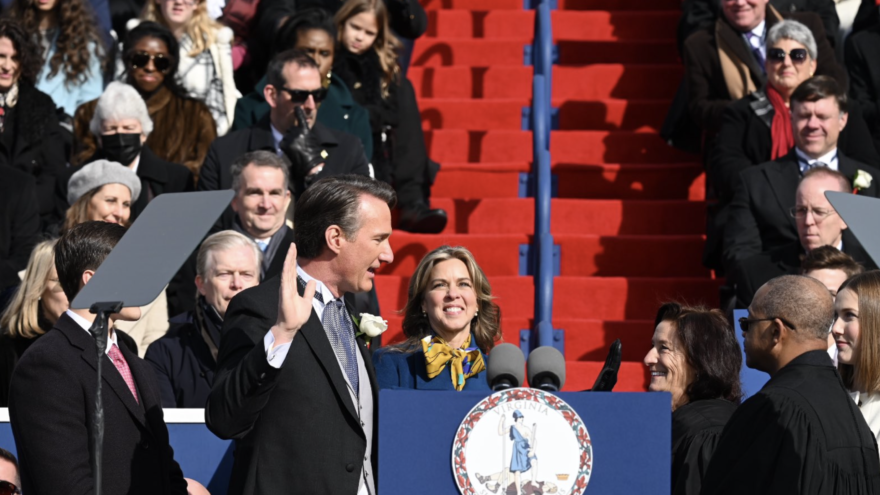 The inauguration of Glenn Youngkin as governor of the Commonwealth of Virginia, Jan. 15, 2022. Source: Screenshot.
Spread the word.
Help JNS grow!
Share now:

(January 18, 2022 / JNS) Just hours after his inauguration as the new governor of the Commonwealth of Virginia, Glenn Youngkin signed an executive order on Saturday establishing a commission to combat anti-Semitism.

According to the text of Executive Order, No. 8—one of 11 executive actions that Youngkin took on his first day—the commission’s purpose is to examine “anti-Semitism in the Commonwealth, propose actions to combat anti-Semitism and reduce the number of anti-Semitic incidents, as well as compile materials and provide assistance to Virginia’s public-school system and state institutions of higher education in relation to anti-Semitism and its connection to the Holocaust.”

The move comes amid an uptick in anti-Semitic incidents across the United States in recent years.

“This disturbing trend has brought to the forefront the necessity of a targeted effort to combat the rising threat of anti-Semitism and ensure all Virginians are free to live their lives without the threat of harassment, violence, or discrimination,” Youngkin wrote in his order. “Every manifestation of anti-Semitism or Holocaust denial is an affront to our society and will not be accepted in the Commonwealth of Virginia.”