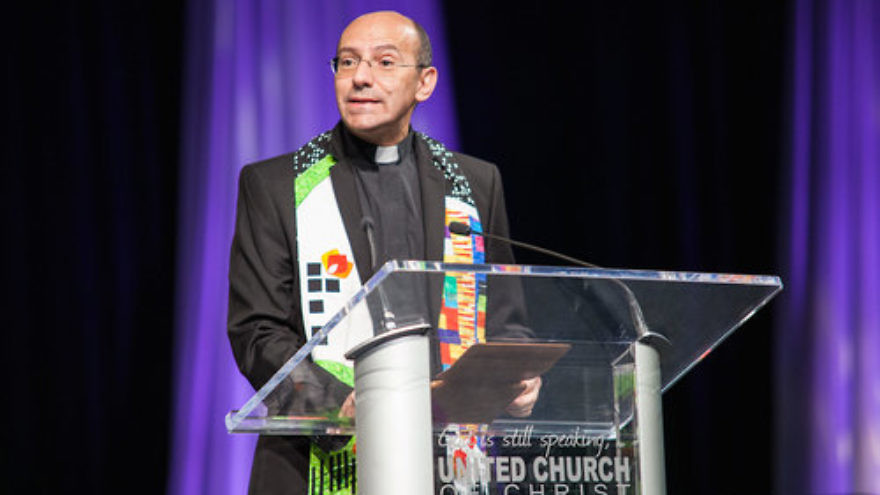 At the United Church of Christ (UCC) General Synod in Cleveland in 2017, Rev. Mitri Raheb, a Palestinian Christian and pastor of the evangelical Lutheran Church in Jordan and the Holy Land, called the UCC's resolution to divest from Israel "a strong signal that [Palestinians] are not alone, and that there are churches who still dare to speak truth to power and stand with the oppressed.” Credit: United Church of Christ/Flickr.
Republish this article
1190 WORDS
Spread the word.
Help JNS grow!
Share now:

(July 3, 2015 / JNS) The United Church of Christ (UCC) last week became the latest mainline Protestant denomination to approve a resolution calling for divestment from companies that do business with Israel. But given the UCC’s declining membership, coupled with prominent issues such as the growing atrocities faced by Middle East Christians at the hands of Muslim terror groups like Islamic State, some observers are questioning the relevance of this latest divestment resolution.

At the UCC’s General Synod in Cleveland on June 30, the vote—508 in favor and 124 against, with 38 abstentions—culminates a process that began in 2005 “to end the Church’s complicity in Israel’s nearly half-century-old occupation and other abuses of Palestinian human rights,” according to a press release from UCC’s Palestine-Israel Network.

In addition to the divestment measure, a UCC resolution describing Israel as an “apartheid” state gained a majority, but failed to amass the two-thirds affirmative vote it needed to pass.

“For Palestinians living under occupation or facing systematic discrimination as citizens of Israel, enduring the destruction of their homes and businesses, the theft of their land for settlements, and living under blockade and siege in Gaza, this [divestment] action sends a strong signal that they are not alone, and that there are churches who still dare to speak truth to power and stand with the oppressed,” said Synod attendee Rev. Mitri Raheb, a Palestinian Christian and pastor of the Evangelical Lutheran Church in Jordan and the Holy Land.

Yet on a practical level, “it’s not a big deal that a dying, fringy, and vestigial denomination like the UCC has targeted Israel with condemnation while remaining silent about the sins of its adversaries,” said Dexter Van Zile, Christian media analyst for the Committee for Accuracy in Middle East Reporting in America (CAMERA).

“But on a symbolic level, there is still something unseemly about a historically important church in the United States giving aid and comfort to groups that seek Israel’s destruction,” Van Zile told JNS.org. “It’s just not right.”

David Brog, the executive director of Christians United for Israel, said that mainline Protestant leaders “seem far more concerned with being politically correct than with the truth.”

“It is fashionable and PC to divest from Israel,” he told JNS.org. “It is neither fashionable nor PC to divest from Iran or Sudan or North Korea. In their rush to fit in, [mainline Protestant denominations] dodge these less-popular fights and choose instead to punish the only nation in the Middle East where Christians are protected and safe.”

Brog added, “The further these churches stray from an authentic biblical message and merely ape popular left-wing politics, they cease to have anything to teach that you can’t learn from MSNBC or the Huffington Post. And you don’t need to leave the comfort of your home to watch MSNBC.”

The UCC was formed in 1957 when two Protestant churches, the Evangelical and Reformed Church and the General Council of the Congregational Christian Churches, voted to unite. As a Congregationalist-style church based on the traditions passed down from the Puritans, every local UCC church is independent and not bound to the rulings of the governing body. Additionally, the UCC’s pension board and investment fund, which control nearly $4 billion, can make their own decisions on divestment.

At the same time, the UCC has had a long history of left-leaning doctrines and views. For instance, at its 2011 General Synod, it removed references to “Heavenly Father” to describe God and chose the gender-neutral term “triune God,” according to the Christian Post.

Nevertheless, like other mainline Protestant churches, the UCC has seen a steep decline in membership over the last few decades.

In 1965, the UCC had 2,070,413 members, and by the end of 2013 there were only 979,239 members, making it one of the smallest Protestant denominations in America—comprising only 1 percent of total Protestants and 0.4 percent of Americans, according to the Pew Research Center.

CAMERA’s Van Zile argues that the UCC’s steep loss in membership and lack of strong convictions makes it more susceptible to being “hijacked” by activists, especially the increasingly vocal supporters of the Boycott, Divestment and Sanctions (BDS) movement against Israel.

“The UCC is the fastest-shrinking mainline church on my radar,” Van Zile said. “It has lost about 50 percent of its members since its founding in the 1950s. And shrinking churches like the UCC and the Presbyterian Church USA are the most easily hijacked by anti-Israel activists.”

“The UCC’s obsession with Israel is the result of its being targeted by folks who use civil society institutions for their own purposes,” he added. “That is what Palestinian Christians have been doing for decades. Denominational leaders should have protected, not assisted this process.”

Similarly, StandWithUs, a pro-Israel educational and advocacy organization, said in a statement that “anti-Israel extremists within the UCC advanced these anti-Israel measures through deceptive rhetoric and tactics,” and that the measures have “severely damaged the UCC’s relationship with the vast majority of the Jewish community, promoted hatred and discrimination against Israelis, and undermined efforts to achieve a just peace between Israelis and Palestinians.”

The watchdog group NGO Monitor blamed a “vocal minority of anti-Israel activists” for driving the vote in favor of divestment, adding that the effort was “bolstered by enablers such as Jewish Voice for Peace.”

“The resolutions put before the delegates overwhelmingly relied on ‘evidence’ and materials provided by a narrow group of NGOs. The consequence was a highly distorted approach in UCC deliberations on the Israeli-Palestinian conflict that resulted in [the June 30] misguided vote,” NGO Monitor said in a statement.

The UCC’s move follows those of other declining mainline Protestant churches who have also turned towards anti-Israel activism as a distraction from troubling core issues. Presbyterian Church USA, which voted last year to divest from Israel in a narrow 310-303 vote, saw a loss of nearly 465,000 members between 2006 and 2012. Two other mainline churches considered divestment from Israel last week, with the Episcopal Church overwhelmingly rejecting a divestment resolution on Thursday and Mennonite Church USA voting to table a similar measure until their next general assembly two years from now.

While it focused heavily on Israel, the UCC gathering ignored other major issues facing Christianity, such as the persecution of Middle East Christians at the hands of Islamic terrorists.

“The resolutions regarding Israel accounted for one-fifth of the 16 resolutions initially proposed by the UCC General Synod. By contrast, inexplicably and tellingly, none addressed the pressing plight of Christians—including beheadings, attacks on churches, expulsions, forced conversions, etc.—at the hands of Islamic State, Boko Haram, and other Islamist forces in the Middle East and Africa,” said Rabbi Noam Marans, director of interreligious and intergroup relations for the American Jewish Committee.

Van Zile echoed Marans, telling JNS.org that the General Synod “did not offer one word of solace or support to Christians and other religious minorities suffering in Muslim-majority countries in the Middle East.”

“How can a responsible organization remain silent about what’s happening to the Assyrians, to the Yazidis, and what the Copts endured in Egypt when [president Mohammed] Morsi was in power? The silence is criminal, simply criminal,” he said.