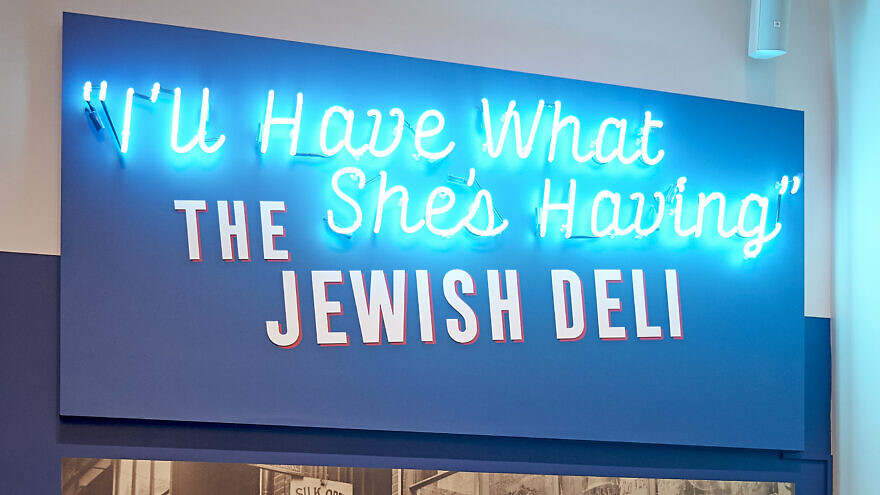 This was a question that George Costanza, played by Jewish actor Jason Alexander, grappled with on a hilarious episode of “Seinfeld.” And, of course, there’s the episode set in Mendy’s, where Jerry argues with an annoying guy named Kenny Bania about whether or not soup and a sandwich constitute a meal.

In “‘I’ll Have What She’s Having’: The Jewish Deli,” an exhibit at Manhattan’s New York Historical Society, one can watch a number of similarly funny scenes, including one from “Curb Your Enthusiasm” in which Larry David is miffed that the sandwich named after him contains whitefish and sable. There’s also the “When Harry Met Sally…” scene in which Meg Ryan feigns sexual pleasure, stunning patrons of the restaurant and prompting a nearby diner to deliver the iconic line from which the exhibit takes its title.

The exhibit displays an apron and other items from Manhattan’s iconic Second Avenue Deli. When ordering soup there, they serve the broth in a silver cup that you pour onto the rest of the contents in a bowl. A video tells us the chopped liver recipe is the same as it has always been. We also see outfits worn on “The Marvelous Mrs. Maisel,” the hit Amazon show with scenes set in the famed Carnegie Deli. There is an incredible miniature replica of Katz’s Delicatessen. Prior to entering, one can dress up as classic sandwiches and take selfies. 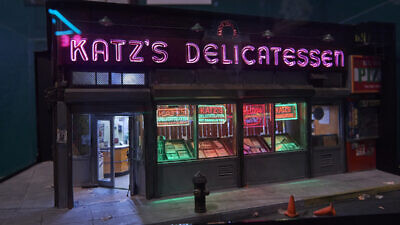 A miniature model of Katz’s Deli on Manhattan’s Lower East Side is on display. Credit: Perry Bindelglass.

Our sense of smell triggers memories, and the smell of a deli may remind you of your first crush, the time when you studied for your bar or bat mitzvah, or how you used to argue about sports teams. It’s fine to be loud and argue in a deli. I loved to eat square kasha knishes and pastrami sandwiches. Sadly, there’s no food at this exhibit.

The exhibit shows Elvis at a deli and pictures of Langer’s Delicatessen as well as Canter’s Deli in Los Angeles, where Guns N’ Roses stopped by to eat. There’s a lox knife from 1968 and a 1930 menu on which all the sandwiches cost 15 cents, except a hot roast beef sandwich at 35 cents, for some reason.

Where have all the delis gone? The exhibit doesn’t give any exact reason for their disappearance. Health concerns may have something to do with it. There are some still going strong, says Elan Kornblum, publisher and president of Great Kosher Restaurants Media Group, whose Great Kosher Restaurant Foodies group on Facebook has more than 76,000 members. He said Essen, located in Brooklyn, where they brine their own meat, is a great example of a deli that impresses and also has Chinese food.

“It’s an interesting question of why there are fewer delis,” Kornblum told JNS. “I think it doesn’t appeal to the younger generation. Unfortunately, it’s more old-school parents and grandparents. The younger generation may want steak and sushi or a place they think is cooler to go. It’s a shame because the pricing is usually good, even though with inflation it’s a bit more now, but people want fancy ambiance, and deli—it is what it is. It’s our grandparents’ deli. It’s also a lot of work to maintain a deli.”

He added that growing up he preferred corned beef, but likes pastrami better now.

I once devoured a pastrami on rye with a generous portion of mustard before basketball tryouts in middle school. I still made the team, but was a bit slow. I also used to frequent Mendy’s on Park Avenue and get stuffed cabbage. I will never forget an incident at the Second Avenue Deli, when two men almost got into a fistfight arguing over whether it was okay to put ketchup on a hot dog.

The exhibit, which began at the Skirball Cultural Center in Los Angeles and opened in Manhattan on Nov. 11, will bring a smile to your face. If possible, it would be great to at least add an aroma of deli meat, or have fake waiters take orders just to see what people’s favorite items are. I could not help but think of my mother, who passed away in 2015, as she would only order after asking everybody else for their opinion on what she should get.

The cliché tells us that the way to a man’s heart is through his stomach, but I think that’s likely true of everybody. And as Shakespeare said, “If you’re feeling blue, the crunch of coleslaw and half-sour pickle will help you.”