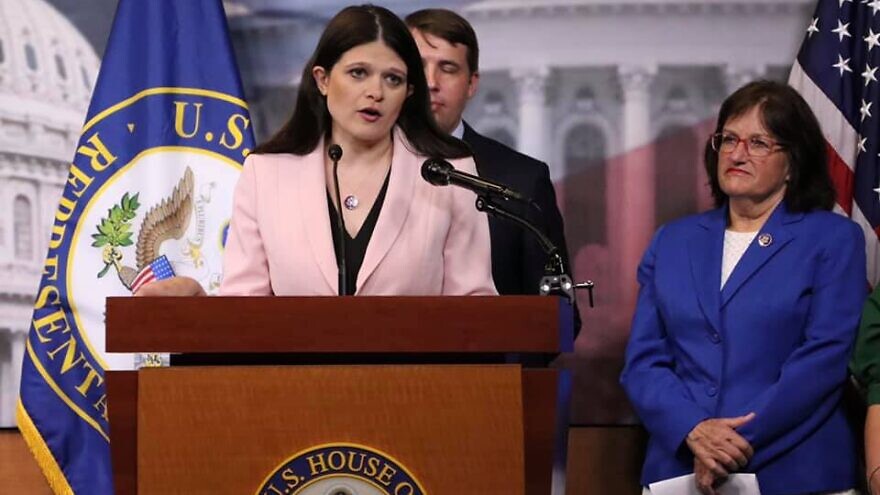 (April 5, 2022 / JNS) Rep. Haley Stevens (D-Mich.) sat last week for an afternoon virtual interview for supporters of AIPAC, where she was able to talk about her pro-Israel beliefs for the organization that endorsed her over her primary candidate, Rep. Andy Levin (D-Mich.).

After Michigan lost a seat in Congress, Stevens ended up in an incumbent-on-incumbent race in Michigan’s 11th Congressional District, which has the largest Jewish population in the state. Israel issues have been prominent in the race as the two candidates have vastly different track records.

Levin, who is Jewish, has often criticized Israeli policies towards the Palestinians and has occasionally joined the small group of progressive Democrats in condemning Israeli actions in the U.S. House of Representatives. While he believes in a two-state solution and considers himself to be pro-Israel, he introduced a bill that would place conditions on military aid to Israel provided by the United States.

Levin, who is supported by organizations such as J Street, has been criticized for is positions on Israel by many in traditional pro-Israel organizations such as AIPAC. Last week, numerous current and former progressive Democratic lawmakers wrote a letter defending him against accusations by former AIPAC president David Victor, who in his own letter to AIPAC supporters wrote that Levin is the most “corrosive” member of Congress to the U.S.-Israeli relationship.

Meanwhile, Stevens, 38, who is not Jewish, has gained strong support for her campaign from numerous traditional pro-Israel organizations and is outspoken in her support for Israel’s right to defend itself.

During the March 31 interview conducted by Elias Saratovsky, AIPAC’s director of regional affairs, Stevens contrasted her view of Israel against her opponent, saying that she’s unequivocally an ally and believer of the U.S.-Israeli relationship.

“I’m very clear,” she said. “We can’t get into the place where we’re forcing Israel to make all the concessions, or being silent when things like the Commission of Inquiry and the Amnesty International reports come down,” she said.

Stevens said that she believes her pro-Israel actions represent the future of the Democratic Party, as she is one of the younger members of Congress, as well as the first woman elected to represent her congressional seat.

She said that concern for Israel’s security is an issue that’s close to her heart, having had friends and friends of friends hiding in bomb shelters during rocket attacks on Israel, such those that occurred last May, launched into civilian population centers by Hamas in Gaza.

She called silence against such attacks complicity.

“We do need to be clear—we don’t need to be sympathizing with terrorist organizations or egging them on or engaging in activities that might embolden Iran, who is a true enemy, not only of Israel but also of the United States,” she said. “There’s a black-and-white world oftentimes when it comes to foreign policy in this regard, and we had innocent people being put in harm’s way.”

Saratovsky asked Stevens how she became such an outspoken advocate for Israel.

Haley responded that as someone whose focus is on science, development and entrepreneurship—having started in government working on the Obama administration’s automotive company rescue efforts and at a federally funded research lab—she is inspired by Israel’s culture of innovation, economic development and scientific research.

These include the proliferation of Israeli technology, which makes an impact on Michigan’s automotive industry.

Stevens also spoke of Israel as a security ally and believes it to be America’s only Democratic ally in the Middle East, calling it a sacred relationship.

She recalled when she first decided to run for Congress, one of the first calls she received was from AIPAC. A friend’s mother told her she should meet with Victor. Stevens said that she was thankful for Victor’s willingness to walk her through the nuances of the issue at that time.

“At the end of the day, this isn’t a classroom conversation that I’m having in Congress,” said Stevens. “These are votes and these are decisions based on behalf of the United States government, based on laws that we are putting forward, resolutions we are putting forward, appropriations that we’re making. And that’s huge … when you take into consideration how you form views.

She said that her mantra in Congress is to “listen, learn and lead, in that order.”

In 2019, Stevens and her mother visited Israel on an AIPAC-sponsored trip, where they met with soldiers from the Israel Defense Forces, in addition to thought leaders and Israeli government officials. She was able to learn about Israel’s borders and the importance of its security, which she called “eye-opening.”

Stevens spoke about Israel’s importance to the global supply chain, saying she wants to see strong trade between the two nations. During the pandemic and the surge in Delta cases, she said that she talked to White House officials, urging them to speak with Israel’s health minister about the lessons it was learning from the new variant’s surge.

Stevens said she had a track record of delivering for her constituents and not “in Congress just for the ‘pie in the sky’ ideas,” including promoting business-to-business relationships between Israeli and Michigan companies and educational institutions.

“There’s a lot to be fired up about with this—with our relationship and with what we’re gaining from the trade from the U.S.-Israel alliance,” she said. “But we also have to have people’s backs when they don’t necessarily have the avenues to use their voice. They don’t have a platform. That’s what I’m working on in Congress, and I’m not afraid to stand up for what is right for what I believe in and what I know to be true.”