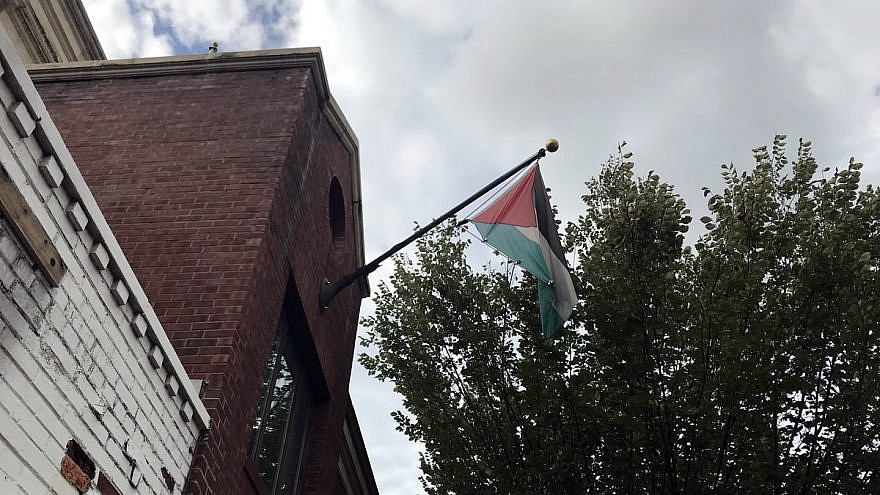 The Palestinian flag just moments before being taken down from the PLO Mission in Washington on Oct. 10, 2018. The Trump administration last month ordered the office to be closed. Credit: Jackson Richman/JNS.
Spread the word.
Help JNS grow!
Share now:

(May 11, 2021 / JNS) A group of Senate Democrats is urging the Biden administration to follow through on its pledge to reopen the Palestinian Liberation Organization’s office in Washington, in addition to the U.S. consulate in eastern Jerusalem.

The letter, organized by Sens. Jeff Merkley (D-Ore.) and Chris Van Hollen (D-Md.), praises the Biden administration for its recent moves to “repair” U.S.-Palestinian relations and to restore “vital economic and humanitarian assistance” to the West Bank and Gaza Strip that had been cut under the Trump administration. This funding includes $75 million in bilateral aid, $150 million in funding for the U.N. Relief and Works Agency for Palestine Refugees (UNRWA) and $15 million in coronavirus relief.

The Trump administration shuttered the PLO Mission in 2018 and the eastern Jerusalem consulate, which handled affairs with the Palestinian Authority, was merged into the U.S. embassy when it relocated from Tel Aviv to Jerusalem, also in 2018. For now, it operates as part of the Palestinian Affairs Unit.

According to the letter, reopening the PLO Mission and eastern Jerusalem consulate “is a crucial step toward reversing the range of harmful actions by the previous administration that undermined the United States’ capacity as an effective and impartial broker for peace and exacerbated distrust between Israelis and Palestinians.”

The Biden administration has pledged to reopen both diplomatic offices. However, the PLO Mission faces several legal hurdles that have so far prevented that, as the Palestinians would become liable for more than $650 in financial penalties in U.S. courts.

The letter has been circulating since mid-April and will close for signatures on May 14. To date, it has been signed by Sens. Patrick Leahy (D-Vt.), Elizabeth Warren (D-Mass.), Sherrod Brown (D-Ohio), Chris Murphy (D-Conn.), Martin Heinrich (D-N.M.), Ed Markey (D-Mass.) and Dick Durbin (D-Ill.), reported the Jewish Insider.