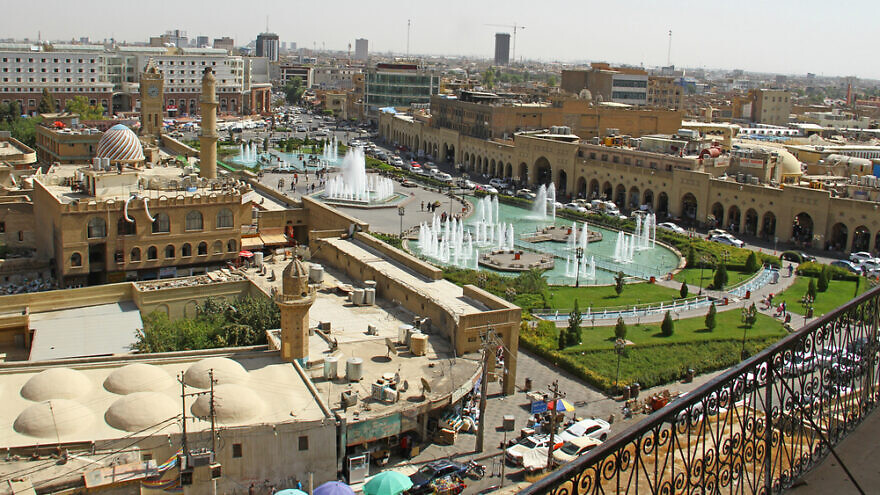 (November 4, 2021 / JNS) Following arrest warrants being issued and public death threats made against many of the 300 Iraqi Muslim leaders calling for their government to make peace with Israel at a conference held in late September in Iraq’s Kurdistan region, Jewish activists of Iraqi origin are voicing support for those in Iraq who seek peace with Israel.

“It is depressing that the conference participants have been bullied in this way,” said Lyn Julius, a Jewish activist of Iraqi descent and co-founder of Harif, an association of Jews from the Middle East and North Africa based in the United Kingdom. “They were very brave to have taken part in the first place but may have underestimated the risks they were taking.”

The conference, which was held in the city of Erbil, drew widespread condemnation from officials in Iraq’s government, who called it an “illegal meeting.” According to the Iraq News Agency (INA), some Iraqi authorities also announced that they would arrest all 300 participants once they had been identified.

Likewise, an arrest warrant was issued for Wisam al-Hardan, leader of the “Sons of Iraq Awakening” movement, who had demanded that Iraq join the Abraham Accords and, at the conference, also encouraged establishing full diplomatic relations with Israel. After widespread public condemnation in Iraq, al-Hardan later issued a video apology and withdrew his support for the event.

Moreover, arrest warrants were issued against other conference speakers, including former Iraqi politician Mithal Al-Alusi, and a senior Iraqi Culture Ministry official named Sahar al-Tai. Later, Al-Alusi, who has long called for peace between Iraq and Israel, claimed not to have attended the conference at all. Additionally, several other conference participants also backtracked from their earlier pro-peace statements.

Iraq has officially been at war with Israel since Israel’s establishment in 1948, and the country’s decades-old laws call for the immediate arrest and imprisonment of anyone dealing with Israelis or having any ties to Israel.

After 1948, members of Iraq’s Jewish community, which once numbered 150,000-strong were stripped of their citizenship, had their assets confiscated by the government and were forcibly expelled from the country. The majority of Iraqi Jews resettled in Israel, though some immigrated to Europe and North America. Today, experts estimate that only a handful of  Jews still live in Iraq.

‘Develop business for the benefit of all sides’

Linda Menuhin, an Israeli peace activist of Iraqi background who spoke via Zoom to the Iraqi activists at the Erbil conference, said many attendees are now recanting their statements of peace with Israel out of fear of physical harm to themselves or their families from the Iranian regime’s militias operating in Iraq.

“I believe that Iran indeed is the biggest challenge on the way because Iraq’s regime cannot practice its free sovereignty and has many stakes currently in Iraq,” said Menuhin, who made a 2013 documentary film, “Shadow in Baghdad,” about the abduction and killing of her father, Jacob Abdel Aziz, by Iraqi officials in the 1970s.

Nevertheless, she said she remains optimistic about the prospects of peace in the future between Iraq and Israel.

“I do believe there is hope for peace in the future due to the fact that millions are yearning to release themselves from Iran’s strongholds directly or through its militias,” she said. “The young are looking to build a future free of enmity based on good relations with all the neighbors.”

Other Iraqi Jewish activists living in the United States and Canada said Israelis and Jews living in the West can help encourage peace with Iraqis by engaging in possible business ventures or beginning a dialogue through social media.

“The best role of the Mizrahi Jews, in this situation, is to establish commercial contacts and develop business for the benefit of all sides,” said Sami Sourani, an Iraqi Jewish activist living in Canada.

Indeed, one Jewish nonprofit group based in San Francisco, “Jews Indigenous to the Middle East and North Africa” (JIMENA), has long been educating groups in the United States and throughout the world about the plight of nearly 850,000 Jewish refugees who fled or were expelled from the Arab and Islamic countries during the 20th century.

JIMENA’s leadership recently released a statement applauding the Erbil conference and calling for future similar events to be done with caution to protect the peace advocates in the Arab countries.

“Because of JIMENA’s outreach work in North Africa and the Middle East, we know there is a desire among so many diverse communities throughout the region for rebuilding and establishing new relationships with Jewish communities in Israel and abroad,” stated JIMENA in their released statement. “But this work must be done with the utmost precaution and sensitivity to the safety and well-being of those brave souls seeking a peaceful path forward.”

‘The future lies in working together’

Joseph Samuels, a 90-year-old Iraqi Jewish activist and speaker for JIMENA who now lives in Los Angeles, said more is needed to be done to educate the new generation of Iraqis and other Arabs about the plight of Jews who suffered because of persecution they faced in their former Muslim homelands.

“I honestly believe that if the younger generation of Iraqis were to learn in their own Arabic language what horrible things were done to Jews of Iraq and how the Jewish expulsion was a disaster for Iraq, it could possibly help to change their hearts and minds to seek peace,” he said.

Interestingly, Samuels said his memoirs Beyond the Rivers of Babylon, which was published last year, is currently being translated into Arabic by a professional translator living Iraq who is a Shi’ite Muslim.

“The man translating my book is a great person, and I know there are many other Iraqis who also have no hate for Jews,” said Samuels. “I think my book in Arabic will educate many Arabs about my horrible experience in escaping Iraq and having to rebuild my new life. I would also love the chance to speak to them through Arabic language media and tell them we Jews harbor no hate for them, even after all the persecution we faced in Iraq.”

For their part, Iraqi Jewish activists said that while the Erbil conference may have had negative consequences for those attending it, it was a productive first step for Iraqis to consider the prospects of peace with Israelis.

“The great thing about the Iraqi conference is that it did not want to turn the clock back and for Jews to ‘return’ to Iraq,” said Julius. “It recognized that Israel is here to stay, that the vast majority of Iraqi Jews are now Israelis and that the future lies in working together with them.”