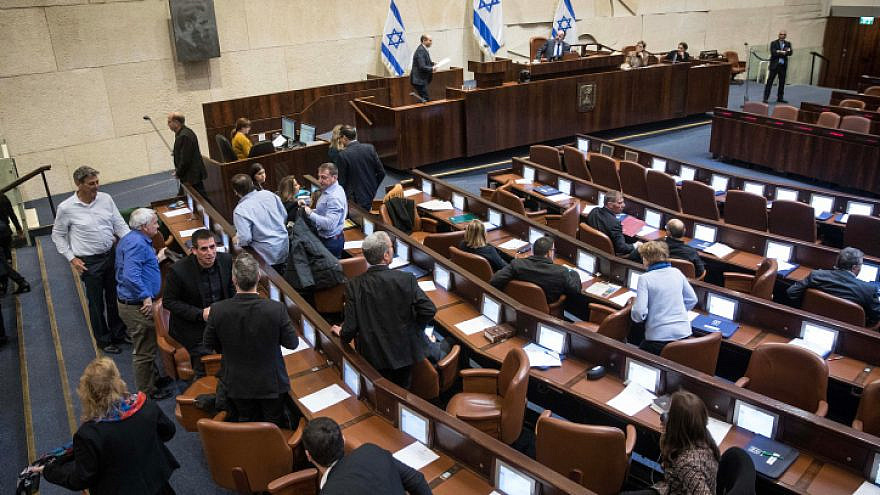 (December 22, 2020 / Israel Hayom) Israel’s government on Monday night failed to pass a bill allowing it to postpone a vote on the state budget, effectively signaling the demise of the 23rd Knesset.

The coalition had to push the state budget through—or have the Knesset pass a bill deferring the vote—by Dec. 23, but the growing tensions on the matter between coalition partners Likud, and Blue and White, proved insurmountable.

The bill to postpone the vote failed by a narrow margin of 49-47 after Likud Knesset member Michal Shir and Blue and White lawmakers Assaf Zamir, Ram Shefa and Miki Haimovich voted against it.

Under Israeli law, if parliament fails to pass the state budget by the appointed date it must disperse, triggering a general election.

The elections are likely to be held in late March. This will be the fourth time Israelis go to the polls in two years.

The bill to disperse the Knesset is expected to be processed and presented for a vote by midnight on Wednesday.

Shortly after the vote, Shir announced she would be resigning from the Knesset and joining Gideon Sa’ar’s new party.

Ahead of the vote, Israeli Prime Minister Binyamin Netanyahu addressed the Knesset plenum.

“At this time, we should be joining forces and finding every way to prevent these unnecessary elections,” he said, referring to the coronavirus crisis. “At the last minute, [Blue and White leader] Benny Gantz withdrew from the agreements we had made to stop the legal dictatorship here, but he could not withstand the pressure of [Justice Minister Avi] Nissenkorn and his friends and we cannot agree to that.”

He added that “Blue and White are going to drag us into unnecessary elections. I’m not afraid of elections; we are prepared for them and we will win, but they are unnecessary. I will vote for the continued existence of the government.”

Gideon Allon and Yehuda Shlezinger contributed to this report.