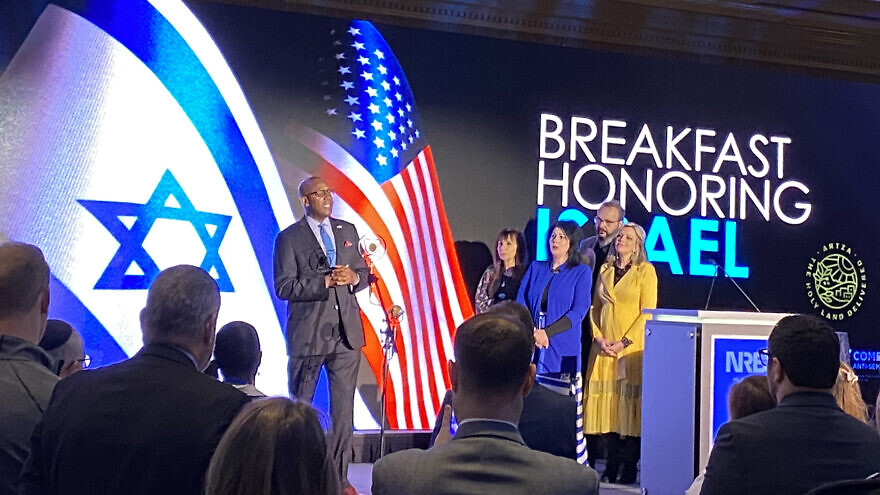 (March 14, 2022 / Israel InSight) At its national convention, the National Religious Broadcasters—a nonpartisan, international association of Christian communicators—announced that its board of directors adopted the International Holocaust Remembrance Alliance’s (INRA) working definition of anti-Semitism, with the call to fight anti-Semitism front and center at the convention’s annual Breakfast Honoring Israel.

The convention was held at the Gaylord Opryland in Nashville from March 7 to March 11.

“Fighting anti-Semitism is a key issue for believers, and it’s very important that our understanding of the issue reflects cultural realities,” said NRB CEO Troy A. Miller. “An accurate and contemporary definition of anti-Semitism helps us to recognize and combat this form of hatred wherever it emerges.”

A joint statement to combat anti-Semitism was also issued by NRB TV, the International Christian Embassy Jerusalem and the Combat Antisemitism Movement, all of which co-sponsored the Israel breakfast.

The statement, which was announced at the breakfast, called on all Christians in the United States to urge their local, state and federal officials to adopt the IHRA definition, and “let your voice be heard in support of Israel and against the growing hatred of anti-Semitism.”

The statement also called on those in Christian media to educate their audiences about contemporary forms of anti-Semitism and the need to adopt the IHRA working definition of anti-Semitism.

The statement noted that Jew-hatred is wrong on historical, moral and religious grounds, and that “attacking the Jewish people, including their bond to the Land of Israel, their historic homeland, is an assault on the Bible and the deep roots of our faith.”

The Israel breakfast is seen by many as a highlight of the convention each year, and it began with Southern bluegrass gospel group the Isaacs performing the “The Star-Spangled Banner” and Nashville Pastor Lyndon Allen singing “Hatikvah.” According to the NRB, the 300-seat breakfast sold out quicker than usual this year.

Johnnie Moore, the keynote speaker at the breakfast, said “very often, this breakfast has been a pep rally for Israel.” But this year, he said, there was a need to address “this particular topic at this particular moment.”

Moore is the founder of the KAIROS Company and president of the Congress of Christian Leaders.

He noted that “we are seeing all over the world, including in the U.S., a resurgent anti-Semitism that we have not seen in generations.”

Moore, who grew up in South Carolina and said he did not know anyone Jewish until he was an adult, said it’s not ideal for someone to love Israel yet have no Jewish friends. He emphasized how Christians need to know their Jewish neighbors and do so “with no other agenda than friendship,” a phrase he would repeat later in his remarks.

While mainstream pro-Israel groups maintain a non-proselytizing stance, Moore’s charge was particularly notable at NRB, where the Expo room included a couple of exhibitors promoting the “messianic” movement, and others that had materials on how to witness to the Jewish community.

The embassy is also working on “bringing Ukrainian Jews home,” committing to raising funds to help resettle 3,000 in Israel.

One major initiative for ICEJ is placing bomb shelters throughout Israel, and they recently placed their 170th. “You and your ministry can raise funds for your own bomb shelter” to dedicate, said Michael.

She also announced that one of the embassy’s major programs—the gathering of representatives from dozens of nations in Jerusalem each year for the Feast of Tabernacles celebrations—will be held in person after a hiatus due to the coronavirus pandemic. “Consider this your personal invitation to be there this year,” she said. As with the last two years, there will still be an online component this year for those who cannot travel to Israel.

Moore also urged everyone to travel to Israel—not just the Holy Land trips that focus on religious sites but miss modern Israel. “Our children need to know Israel,” he said. “They need to know Jewish Israel, not just Christian Israel.”

“Don’t wait to the end of your life to go,” he said, adding that “there is nothing that will make your pastor’s sermons better” than an Israel trip.

‘An evangelical firewall around the Jewish community’

Kobby Barda, deputy director-general of the Israel Ministry of Tourism, spoke of the growing relationship with Christian supporters of Israel. “To see the development of the relationship, being here listening to ‘Hatikvah,’ it is an emotional experience that I can’t really describe.”

Christian support “is tremendously important in the era we are living in,” he said.

Videos for Sar-El Academy programs at Mount Kadir were shown, along with a video from Combat Antisemitism detailing what Jews around the United States have faced in the past year, particularly during Israel’s 11-day conflict with Hamas in the Gaza Strip last May.

Artza Box, a last-minute sponsor of the breakfast, gave attendees a taste of Israel, with one of their boxes at each seat.

In his remarks, Moore said Christians need to know their history towards the Jews—the good and the bad.

“We have to tell the stories of the brave Christians who stood up against this hate,” such as Dietrich Bonhoeffer, Oskar Schindler and Corrie ten Boom, along with early Christians who embraced Zionism.

He said it is little known that Theodor Herzl invited Christian leaders to the First Zionist Congress, including Henry Dunant, founder of the International Red Cross and the first Nobel Peace Prize winner.

Dunant had promoted the idea of a Jewish state as early as the 1860s; the term “Christian Zionist” came from how Herzl described his friend in his remarks at the first Congress, related Moore.

Herzl’s most “loyal disciple” was Rev. William Hechler, who wrote “The Restoration of the Jews to Palestine” a decade before Herzl wrote his book. Moore noted that Herzl saw Zionism as a national movement, but Hechler saw its roots in the Bible.

Nevertheless, “Herzl put Christian Zionism at the very heart of this movement.”

But while telling those stories, Moore reminded, “we need to tell the other part of the story … the pogroms. We must tell our children, to our shame, the complicity of the church with the Nazis” and that “the world’s greatest horror took place in Christian Europe.”

Not telling the whole story will “squander this incredible friendship” between Christians and Jews.

And when it comes to anti-Semites, “let’s make sure there is an evangelical firewall around the Jewish community—that they have to get through us first.”