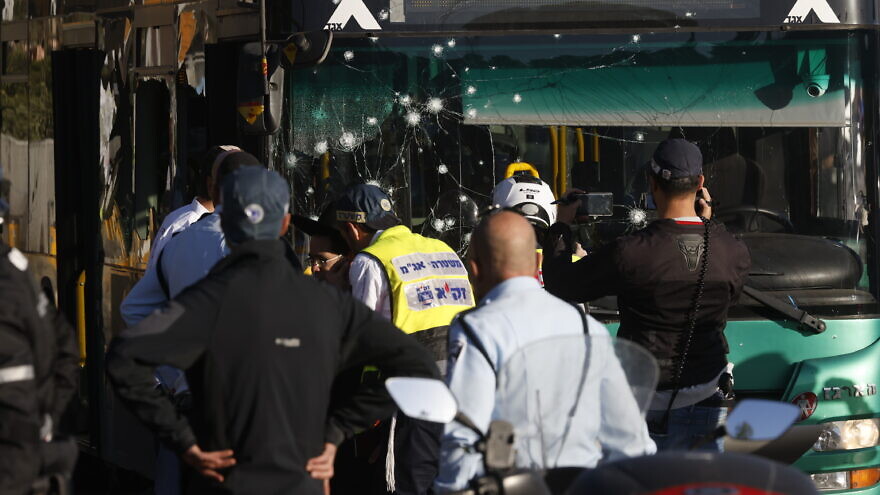 Police and security personnel at the scene of a terror attack near the entrance to Jerusalem, Nov. 23, 2022. Photo by Olivier Fitoussi/Flash90.
Republish this article
652 WORDS
Spread the word.
Help JNS grow!
Share now:

(November 23, 2022 / JNS) One Israeli was killed and more than 20 injured on Wednesday in two explosions at bus stops located near entrances to Jerusalem.

Authorities believe that the source of the blasts were two remotely detonated bombs packed with nails to cause maximum damage. 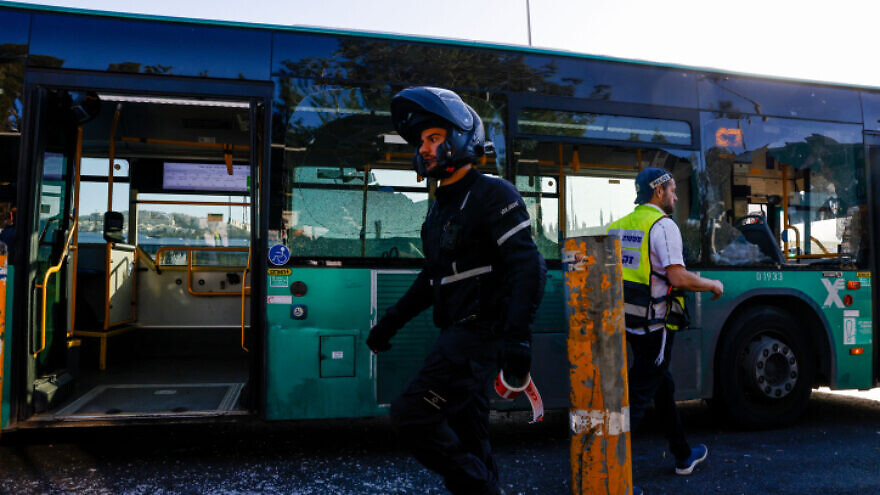 Security personnel at the scene of a terror attack in Jerusalem, Nov. 23, 2022. Photo by Olivier Fitoussil/Flash90.

The first explosion occurred near the main entrance to the Israeli capital shortly after 7 a.m., and the second followed about 30 minutes later, at the Ramot junction.

The deceased was identified as 16-year-old Israeli Aryeh Shechopek, a resident of Jerusalem’s Har Nof neighborhood who was studying in a religious school.

Heartbroken to confirm that a young Canadian lost his life in this morning's reprehensible terror attack in Jerusalem. Our sincere condolences to his family and friends, and to others wounded in this attack. Canada continues to condemn all forms of terror. 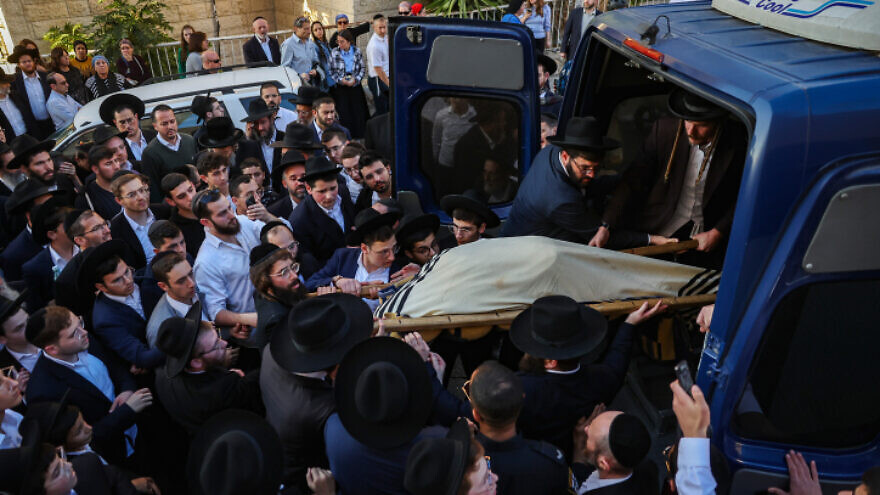 Hundreds attend the funeral of Aryeh Shechopek, who was killed in a terrorist attack in Jerusalem on Nov. 23, 2022. Photo by Yonatan Sindel/Flash90.

Israel Police Commissioner Yaakov Shabtai visited one of the scenes and held a situation assessment together with Jerusalem Police District head Doron Turgeman.

“This is a type of attack that we haven’t seen for many years,” said Shabtai.

He called on the public to be alert for suspicious packages, adding that every bus in Jerusalem would be searched. 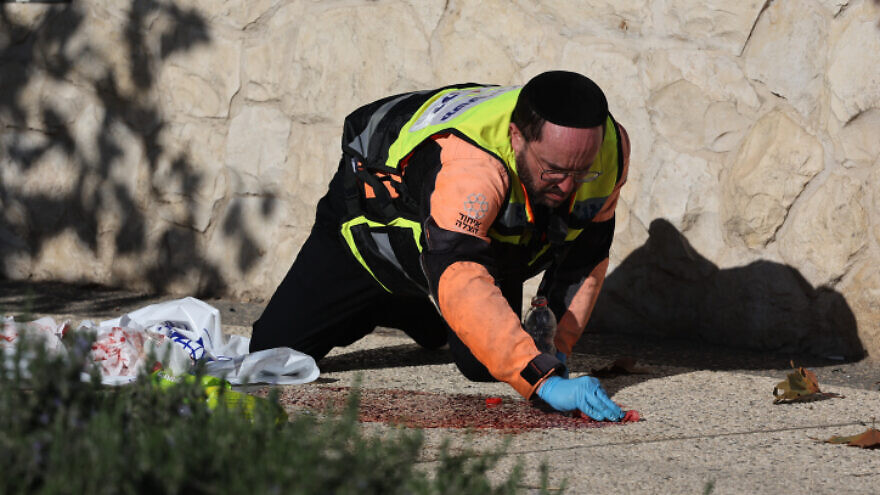 ZAKA personnel clean blood off the ground at the scene of a terror attack near the entrance to Jerusalem, Nov. 23, 2022. Photo by Yonatan Sindel/Flash90.

Israeli Defense Minister Benny Gantz held a situation analysis following the attack, together with the head of the Israel Security Agency (Shin Bet) and the Israel Defense Forces deputy chief of staff.

Israeli Prime Minister-designate Benjamin Netanyahu tweeted, “Praying for the peace of the injured in the combined attack in Jerusalem this morning and strengthening the hands of the security forces operating in the field.”

He added in a follow-up message: “I am sending condolences on behalf of all citizens of Israel to the family of Aryeh Shechopek…who was killed today in the terrible terrorist attack. May his memory be for a blessing.”

United States Ambassador to Israel Tom Nides wrote on Twitter that he was “appalled” by the “cowardly” attack, and that his “heart breaks for the families of those who were harmed.”

Appalled by the cowardly terrorist attacks in Jerusalem today that targeted innocent civilians, including children. My heart breaks for the families of those who were harmed. 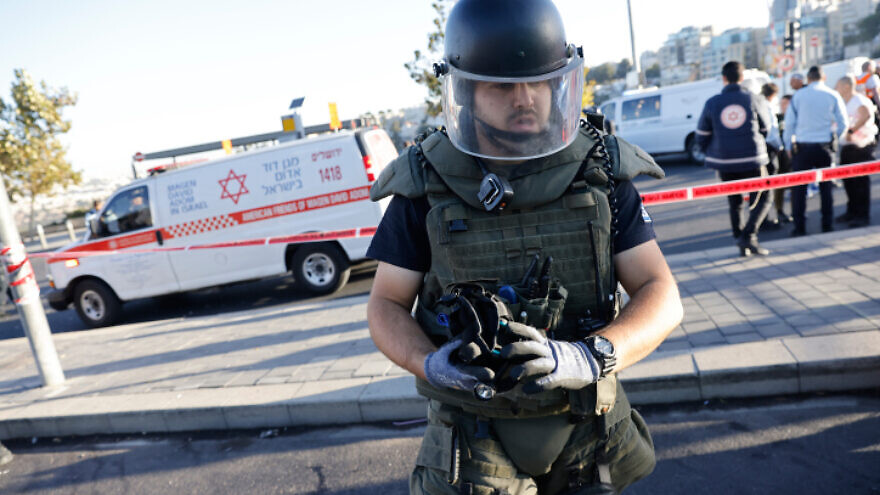 Police and security personnel at the scene of a terror attack at the entrance to Jerusalem, Nov. 23, 2022. Photo by Olivier Fitoussil/Flash90.

“I would first like to send my condolences and the condolences of the government of Israel to the family of Aryeh Shechopek, of blessed memory. He was a boy who never wronged anyone in the world, and he was murdered simply because he was Jewish. I also wish a speedy and full recovery to the wounded,” said Lapid following the meeting.

“This event is different from what we have seen in recent years. An extensive intelligence effort is now underway that will lead us to find these heinous terrorists, those behind them, and those who provided them with weapons,” he continued. “I want to say to the citizens of Israel: We will find them. They can run, they can hide—it won’t help them; the security forces will reach them. If they resist, they will be eliminated. If not, we will punish them to the fullest extent of the law.”

Lapid added that he ordered the reinforcement of forces in the Jerusalem area. 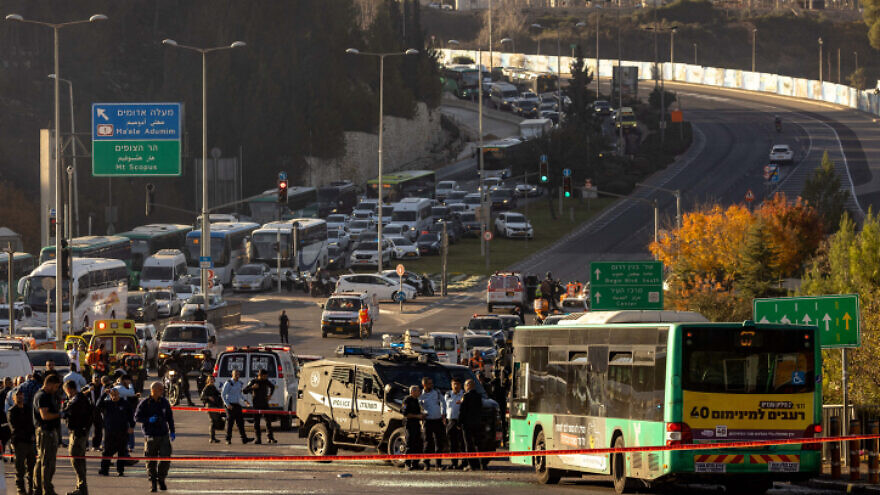 Police and security personnel at the scene of a terror attack in Jerusalem on Nov. 23, 2022. Photo by Olivier Fitoussil/Flash90.

Hamas praised the attack, saying in a statement that the “Zionist enemy” was “paying the price today for its crimes and aggression against our [Palestinian] people.”

The attack on Wednesday is the second deadly terrorist incident in as many weeks. Last Tuesday, three Israelis were killed and three others wounded when a Palestinian went on a stabbing and car-ramming rampage in and around the city of Ariel in Samaria.