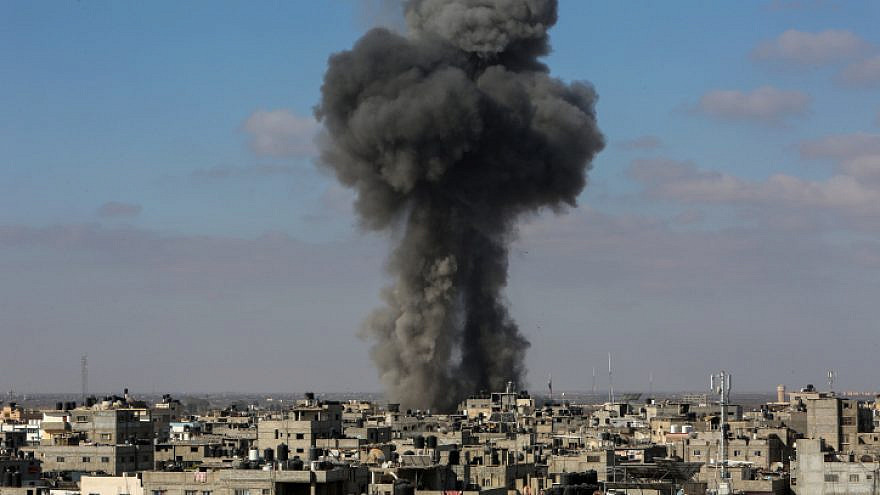 Smoke billows after an Israeli airstrike on the city of Rafah, in the southern Gaza Strip, on May 13, 2021. Photo by Atia Mohammed/Flash90.
Republish this article
964 WORDS
Spread the word.
Help JNS grow!
Share now:

(May 13, 2021 / JNS) Rockets fired by Hamas in the Gaza Strip killed a number of Gazan civilians in the first hours of attacks on Monday, an Israeli security official said on Thursday.

After Hamas fired rockets at Jerusalem at 6 p.m. local time, three hours passed before the Israel Defense Forces responded at 9 p.m., according to the source. Yet during those three hours, he said, 17 Gazan noncombatants were killed by failed rocket launches that crashed into Gaza areas.

“This is an internal mistake or a technical problem that happened when they fired,” said the official.

The official said that the Israel Defense Forces is making every possible effort to distinguish between Gazan civilians and enemy combatants, saying, “There are mistakes, but we are doing everything in our power to distinguish them and putting all of our resources into this.”

Every target must be approved by the highest-ranking officer before it is struck as part of the effort to avoid civilians, the source stressed. The IDF also places warning calls and drops empty munitions on buildings (“roof-knocking”) before striking in many cases.

Earlier on Thursday, Defense Minister Benny Gantz approved the call-up of 9,000 reservists, after the previous approval of 7,000 reservists. The personnel will enter combat units and support headquarters as part of “Operation Guardian of the Walls,” Gantz’s office said in a statement, adding that they will be stationed in the IDF’s Southern, Central and Northern Command in place of other units mobilized to other missions.

Also on Thursday, the IDF intercepted an armed drone sent by Hamas over southern Israel.

IDF spokesperson Capt. (Res.) Libbi Weiss told JNS that the military had been following the threat of armed drones by Hamas for a lengthy period, adding that the IDF was not surprised by the attack.

It shot down a total of four unmanned aerial vehicles, of which two were explosive drones, according to Ynet. The report said the Iron Dome air-defense system was used to shoot down one threat, a second by a Python missile fired by an F-16, while “the third and fourth were intercepted through a classified means,” said the report.

Hamas and Palestinian Islamic Jihad continued firing rockets at southern and central Israeli cities throughout Thursday. By Thursday afternoon, the IDF clocked more than 1,750 rocket attacks since the beginning of hostilities with some 300 falling short in Gaza. Iron Dome intercepted 90 percent of projectiles heading to built-up areas.

At 2 a.m. on Thursday, a rocket got through the defense systems and smashed into a residential area in Petach Tikvah, injuring five Israelis and causing damage to a four-story building.

“I’m standing here at Petach Tikvah, looking at the damaged building,” said Weiss. “It very much serves as an unbelievable example of what is going on here. It is miraculous that they were all able to get into the shelter. The neighborhood looks like a rocket-impact area. These developments are incredibly concerning to us.”

Earlier on Thursday, International IDF spokesperson Lt. Col. Jonathan Conricus said the military had struck more than 600 enemy targets in Gaza belonging to Hamas and Palestinian Islamic Jihad, and that airstrikes were continuing.

Also on Thursday, jets hit a Hamas intelligence headquarters, including the main military observation center used by Hamas. Dozens of Hamas operatives were present at the site during the Israeli airstrike, said the IDF.

A total of seven Israelis—six civilians and one IDF soldier—have been killed by terrorist projectiles since Sunday.

‘We have a set plan of military targets’

The IDF continued to hit a range of targets, including a missile manufacturing site belonging to Hamas and a Hamas naval force site that doubled up as a missile manufacturing site in central Gaza. Other weapons production sites were hit all over the Strip. Several buildings used by Hamas and Palestinian Islamic Jihad for military purposes were hit as well.

An additional target, described by Conricus as a defensive tunnel, where operatives hide and move between locations, was hit. “This specific tunnel was dug under a school and in very close to an infirmary,” he said. “We continue to strike the different rocket-firing pits, too.”

Israel has been able to knock out a significant part of Hamas and Palestinian Islamic Jihad firing capability, but “it is by no means totally degraded,” said Conricus. Dozens of enemy combatants have been killed by IDF strikes, he added.

Wednesday’s IDF strike that killed a number of Hamas’s senior military leadership had somewhat of a cooling effect on Hamas, though it was too soon to know how long this would last, he said.

IDF Chief of Staff Lt. Gen. Aviv Kochavi spoke with his U.S. counterpart, Gen. Mark Milley, chairman of the Joint Chief of Staff on Wednesday, and updated him on the situation, the challenges Israel faces and its preparations. He also shared details of Israel’s military planning.

“This was a very important conversation,” noted Conricus.

“Our posture going forward is that the IDF is continuing operations. We have a set plan of military targets belonging to Hamas and Palestinian Islamic Jihad. Our intention is to continue to strike those targets to derail their military capabilities to fire at us,” he said.

IDF ground maneuver units are in “various stages” of preparations at the Gaza border, he added, though no order has been given by the Israeli government to launch such an offensive.