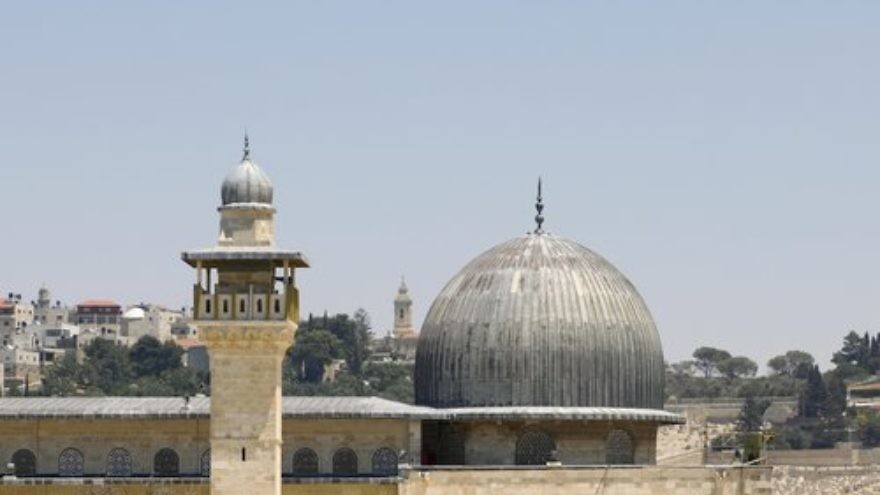 (November 29, 2020 / Israel Hayom) The dispute that is now rocking the Muslim world is not about whether the Prophet Muhammad’s famous “Night Journey” actually took place or was merely a dream. The current debate, which is intertwined with political, religious and nationalist motivations, has to do with the question of where Al-Aqsa (“the farthest”) Mosque, from whence—according to Muslim tradition—Muhammad set off on his way into the heavens, is located.

Widespread Muslim belief, backed by religious literature, says that the angel Gabriel was revealed to Muhammad in Mecca, riding a winged beast named al-Buraq. Muhammad took the angel up on his invitation to ride al-Buraq into the sky, but made an important stop at Al-Aqsa. Only after that did they rise into the sky together, where Muhammad received the commandment that requires Muslims to worship five times a day, and also stipulates that the prayers be directed toward Mecca.

Now, some 1,400 years after the Muslim belief that the Koranic Al-Aqsa sits on the Temple Mount in Jerusalem took root, a debate from the early days of Islam has resurfaced. Is Al-Aqsa in Jerusalem, as the vast majority of Muslims believe? Or, as Saudi researcher Osama Yamani claims in the Saudi establishment paper Okaz, is it near Mecca on the Arabia Peninsula.

According to Yamani, the mosque Muhammad visited is actually located in Al-Ju’ranah in Saudi Arabia’s Makkah Province.

Since his article was published, Arab social media has been aflutter. Yamani is accused of spreading “perverse nonsense that contradicts the Quran and Sunni Islam.” A few claimed he is “sick” or “insane.” Some, like the Turkish television station TRT, claim that his remarks were designed to serve the “Zionist agenda” and attempts by Jewish Middle East scholars to deny that Al-Aqsa is located in Jerusalem, as well as Muhammad’s miraculous night flight. Others say the article was published for political reasons, as an attempt to pave the way for Saudi normalization with Israel.

The article also infuriated several officials in the Palestinian Authority. Mohammad Habash, the P.A.’s highest-ranking sharia (Islamic law) judge, thinks the article was designed to serve “enemies of the nation.” Dr. Ali Abu al-Awar, who wrote his doctorate at the Hebrew University of Jerusalem and Harvard, calls Osama Yamani a “highwayman.”

‘The Umayyads invented a story’

Yamani, it should be noted, is not the first to question the identification of the Al-Aqsa Mosque in Jerusalem as the Koranic Al-Aqsa. The Egyptian intellectual Dr. Youssef Ziedan did so in 2015, as did Jordanian researcher Dr. Suleiman al-Tarawneh in 2017, and one Israeli researcher, Dr. Mordechai Kedar, who has been expounding the theory for 12 years. They all refer to ancient historians like al-Waqidi (at the end of the eighth century C.E.) or al-Azraqi (ninth century C.E.), both of whom wrote similar arguments over 1,000 years ago.

Kedar sums up this dissenting version:

“Fifty years after the death of Muhammad in 682 C.E., Abd Allah Ibn al-Zubayr, who was the bully of Mecca, revolted against the Umayyad Dynasty that ruled in Damascus. He closed the roads and prevented Damascus residents from making the Haj pilgrimage to Mecca. Having no other choice, the Umayyads chose Jerusalem as an alternative Haj destination, which is one of the five fundamental commandments of Islam. To entrench their choice of Jerusalem, they invented the story that the Al-Aqsa Mosque mentioned in the Koran wasn’t in Ju’ranah, but in Jerusalem. They linked the story to the Koran myth about Muhammad’s night flight to Al-Aqsa Mosque by inventing a number of hadiths that are essentially rewritten history.” 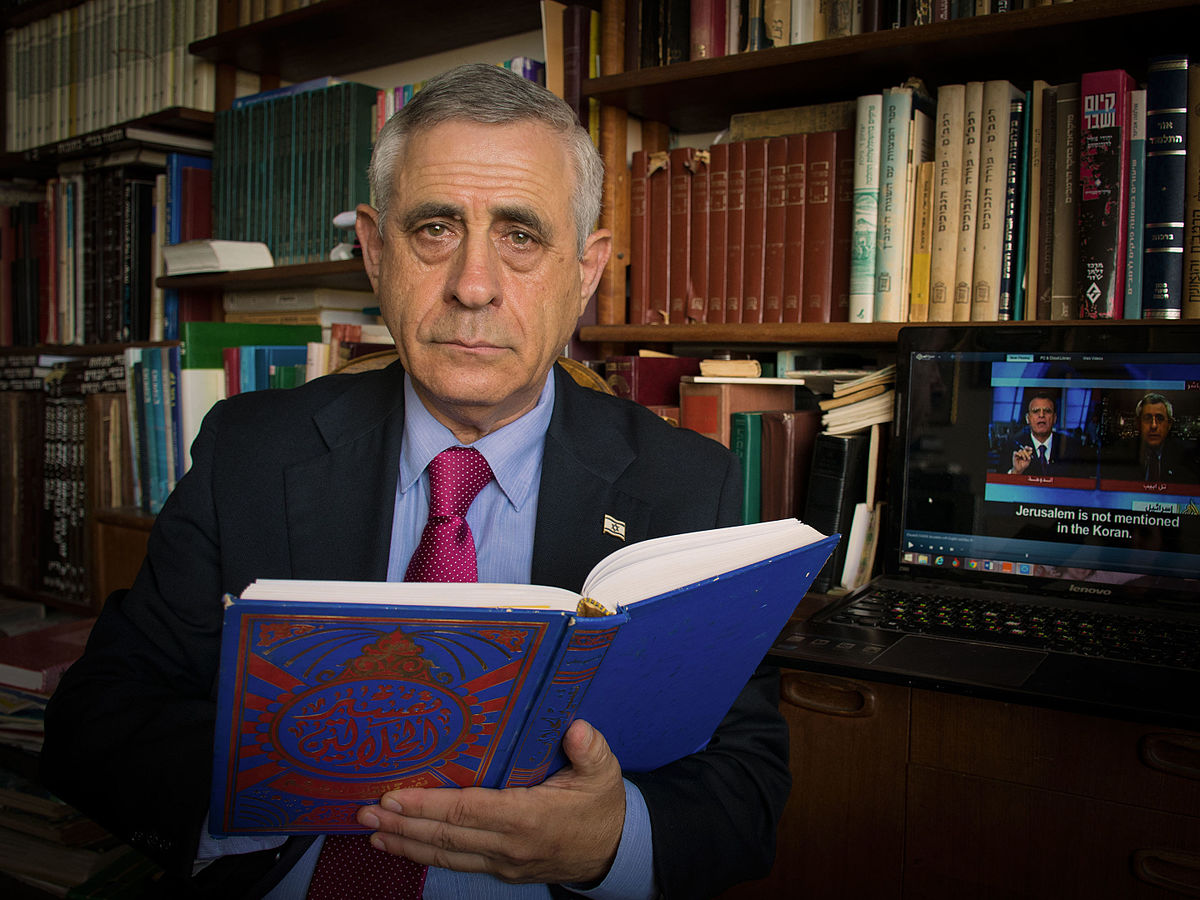 According to Kedar, this led to the Sunni Muslim belief that Jerusalem is the third-holiest city in Islam.

“I didn’t invent these arguments,” said Kedar. “They were made 1,000 years ago by the great Ibn Taymiyyah and al-Waqidi, who cannot be suspected of Judaism or Zionism. They looked for the truth and they knew about the industry of falsified hadiths that operated in the seventh and eighth centuries.”

Unlike Kedar, Middle East scholar Professor Yitzhak Reiter, author of From Jerusalem, to Mecca and Back–The Islamic Consolidation of Jerusalem and a former adviser to three prime ministers—Menachem Begin, Yitzhak Shamir and Shimon Peres—is by no means “right-wing,” and yet he is in agreement with Kedar on the history.

However, Reiter believes that the debate around the question of where Al-Aqsa Mosque is located has erupted now because of the normalization agreements between Israel and the United Arab Emirates and Bahrain and the improved ties between Jerusalem and Riyadh. 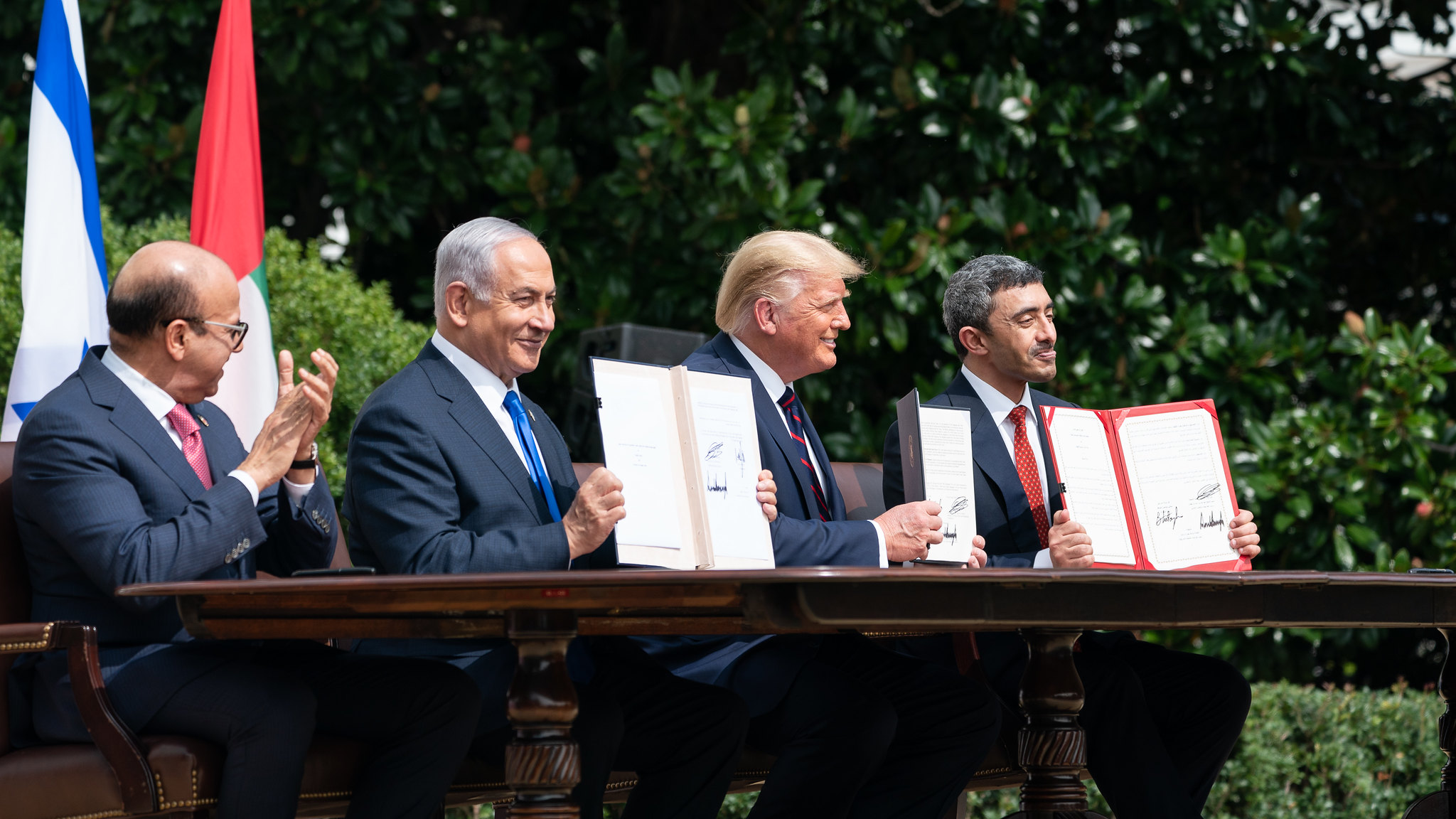 “This is a transparent attempt to reduce the weight of the Palestinian issue in relations between the Arab world and Israel,” said Reiter. “In other words, this is part of an attempt to say that the holy places on the Arabian Peninsula—Mecca, Medina and now many [say] Al-Aqsa—are much more significant, and that Al-Aqsa Mosque in Jerusalem is less worthy of a place in the center of that normalization,” he added.

Reiter, like Kedar, notes that the argument about the holiness of Jerusalem and Al-Aqsa goes back to the dawn of Islam.

“In effect, we have sources like al-Waqidi from the ninth century and others who argue that the original mosque is located in Ju’ranah in the Makkah Province,” he said.

Hadith as an early form of social media

Reiter stresses that Jerusalem became holy to Islam 60 years after Muhammad’s death when the Umayyad dynasty ruled the Land of Israel. They had no access to Islamic holy sites on the Arabian Peninsula after al-Zybayr seized power there. 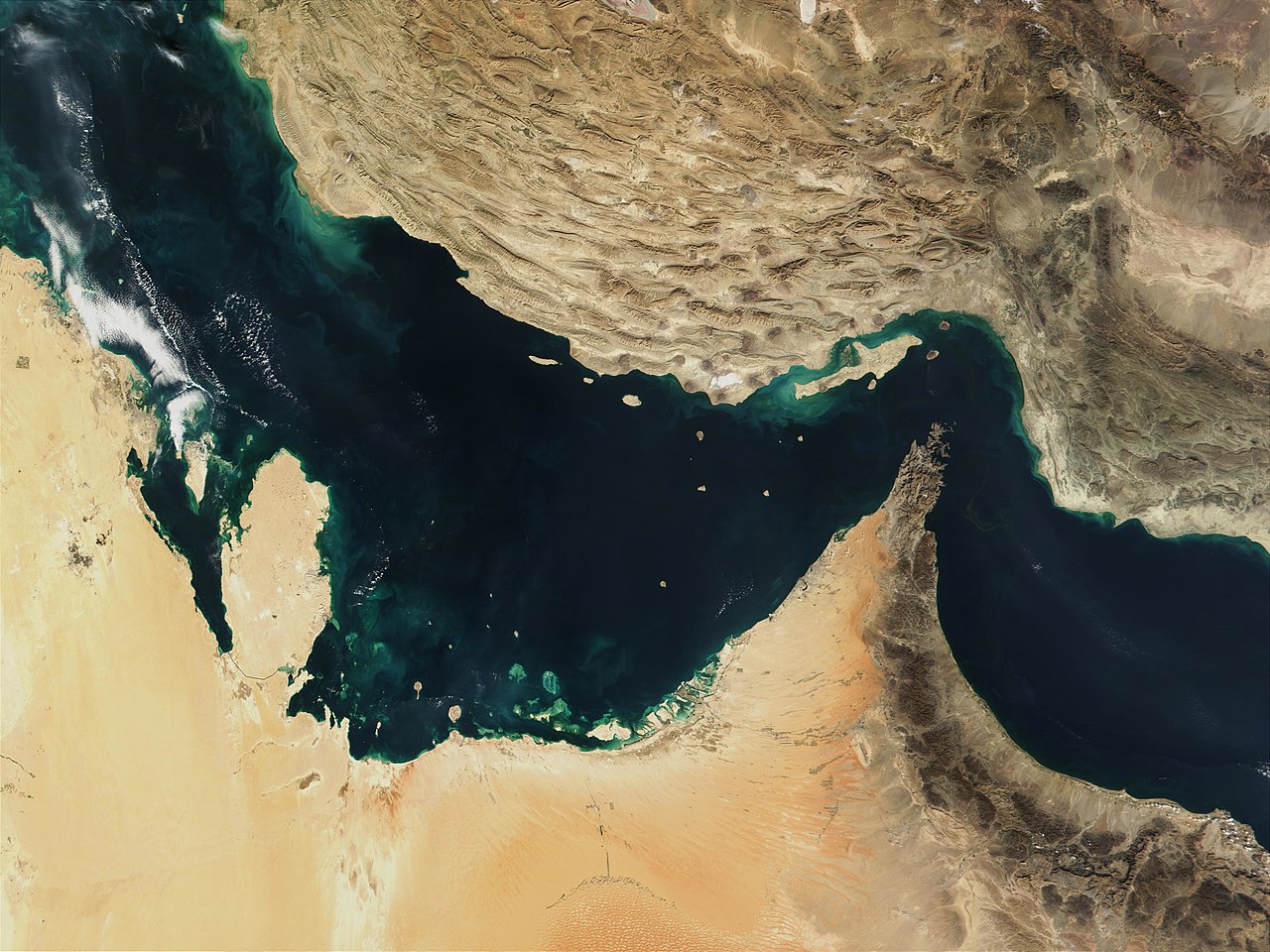 A satellite image of the Arabian Gulf, Strait of Hormuz and the Gulf of Oman, Dec. 30, 2001. Credit: NASA via Wikimedia Commons.

“Only then did the Umayyads start developing Jerusalem as a spiritual center. My interpretation is that they were very successful in the battle for hearts and minds. They had people write hadiths and traditions and disseminated them. In today’s terms, we’d say that they controlled the media and social media by distributing and inculcating the hadiths, and the belief that Jerusalem is the third-holiest place to Islam and that Jerusalem is the first direction of prayer according to Muslim tradition.

“They also invented a tradition that Al-Aqsa Mosque was built 40 years after the Kaaba in Mecca by Abraham and Ismail. But the more important tradition they managed to instill attributes to Muhammad the decree that pilgrimage is permitted to three places—the holy mosque in Mecca, the Prophet’s Mosque in Medina and Al-Aqsa Mosque in Jerusalem. That is the famous hadith about the three mosques, and it was invented in the Umayyad period to serve them,” said Reiter. 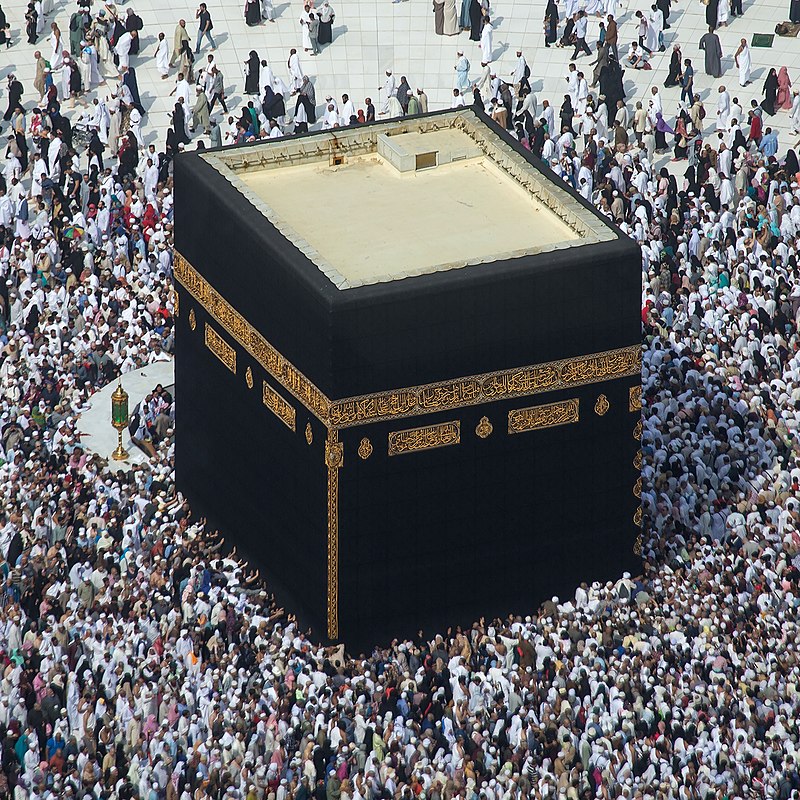 The Kaaba in Mecca surrounded by worshippers at the center of Islam’s most important mosque, the Great Mosque of Mecca. Credit: Wikipedia.

However, Reiter noted that no remains of an ancient mosque have ever been found in Ju’ranah, and said that in any case, “You can’t challenge a 1,300-year-old belief.” The current discussion on the subject, he reiterated, “is a political trend, and even if it has a historical basis, it’s designed to weaken the Palestinian position.”

Nor is there consensus in Israel on the history; one of those critiquing the renewed questioning of Al-Aqsa is Middle East scholar Eran Tzidkiyahu of the Forum for Regional Thinking. Tzidkiyahu penned a long Facebook post on the subject, taking issue with the “hypocrisy” of subjecting one narrative, the Muslim one, to critical scientific analysis, “while the narrative of the other side, the Jewish one, is accepted as truth that is not only historically correct but also confers modern-day political rights.”

This new attempt to invalidate the Muslim historical-religious narrative, he said, “arose in order to justify the cancellation of political rights.”

“Academic research takes the existence of God out of the equation and looks at historical events. According to research, no god ever promised or sanctified the city of Jerusalem, or Al-Quds, to any nation or religion. The research assumes that all the processes of sanctification and politicization were created as the result of human, religious, political and social processes.

“Therefore, even if Jerusalem later became holy, whether it was because of kings who identified with the House of David in the eighth century BCE, or because of a Muslim dynasty that aspired to lead the Islamic world in the seventh century C.E., it doesn’t cancel 1,400 or 2,700 years of holiness and religious and political centrality, not for Jews and not for Muslims,” he said.

Tzidkiyahu stresses that the greatest researchers of Islam delved into the question of Jerusalem’s holiness, poring over books, ancient manuscripts, ancient sources in classic Arabic, Latin, Greek and Persian, and integrating sources and comparing texts.

“They published endless articles and books on the subject, but not one of the serious researchers thought to translate these historical commentaries into political statements. They focused on research,” he said.

This week, Israel Hayom asked Kedar about the practical meaning of the claims he has been making for over a decade now being made by Muslim researchers. Does he really expect Muslims to drop a 1,300-year-old belief and adopt the view that Al-Aqsa is near Mecca, not in Jerusalem? Might this not be an “own goal,” with challenges about historical truths also being leveled at biblical accounts? 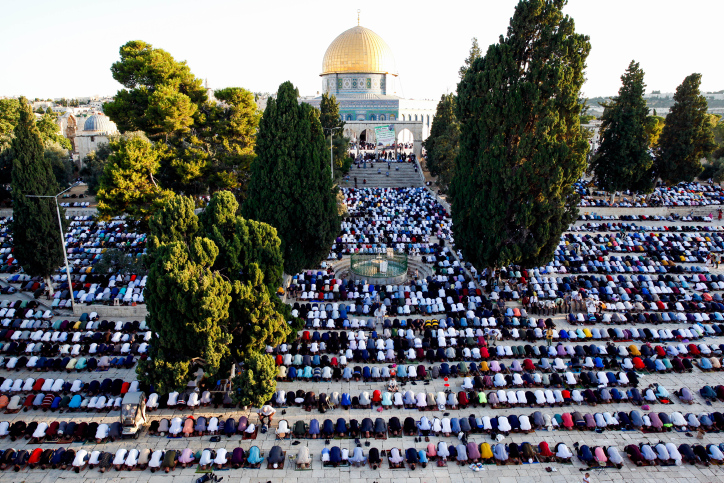 Palestinians prayer on the Muslim holiday of Eid al-Adha, at the Al-Aqsa Mosque compound in Jerusalem’s Old City on July 31, 2020. Photo by Sliman Khader/Flash90.

“Your question is influenced by the distance between postmodernism and modernism,” said Kedar. “Postmodernism claims that there is no absolute truth. Anyone who accepts that view accepts Jerusalem’s holiness to Islam as a fact. I, as a realist, am looking for the absolute truth. A narrative is a collection of stories that I believe and expect everyone else to respect. That is how religious-national narratives are constructed. But as a researcher, I want to get to the truth and understand how stories are created, how a narrative is created. Understand whether they have a historical basis, and now that I understand that, I say again, the so-called truth about the sources of Jerusalem’s holiness to Islam is clear to many people now, not just me.”

Kedar went on to state: “I research Islam, and people’s motivation today to make up stories is no different from what motivated them 1,400 years ago. The story is a battle for power and control. Why do you think the Saudi king calls himself ‘guardian of the holy sites’ [Mecca and Medina]? The Saudi royal family comes from the Riyadh area. They made themselves into the guardians of the holy places to give their rule legitimacy. Now the Palestinians, particularly the Islamic Movement, have made Al-Aqsa their top priority in order to position Jerusalem as a central issue for the Muslim world. The more they succeed, the more the Saudis will claim that Al-Aqsa is located there.”

Could the debate among Muslims about the location of Al-Aqsa spill over into violence and bloodshed?

Reiter, Kedar and Tzidkiyahu don’t think so, but suggest that we wait and see whether the Saudi newspaper article signals a stance the Saudi royal family will adopt, or whether it was a shot in the dark. If that theory becomes more prevalent, Tzidkiyahu said, “there will be more potential for violence and bloodshed.”