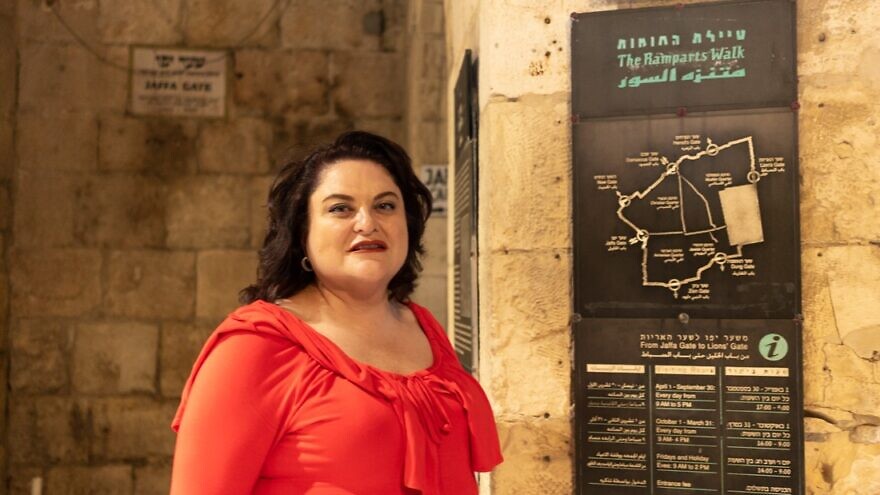 (May 17, 2022 / JNS) Jewish Indiana businesswoman Angela Grabovsky won the Republican nomination for the House of Representatives in Indiana’s 7th Congressional District on May 3. To celebrate her victory, one of the first things she did was get on a plane to Israel to thank God—and pray for the well-being of her state, the United States and Israel.

The district includes Indianapolis—the state’s capital and largest city—whose incumbent congressman since 2008 is André D. Carson, a legacy Democrat (his grandmother, Julia May Carson, was also an Indiana Democratic congresswoman) who has recently voted with the radical left-wing “Squad” on issues involving Israel.

In 2021, Carson was one of nine members of Congress who voted against American funding for Israel’s Iron Dome missile-defense system. At the same time, he has ties to Nation of Islam leader and well-known anti-Semite Louis Farrakhan. Grabovsky hopes to unseat Carson this coming November.

She sat down with JNS in the lobby of a Jerusalem hotel on May 12 to discuss her positions, which she believes will benefit Hoosiers, the United States and Israel.

Grabovsky, a former Soviet refusenik who fled to the United States from Ukraine in 1989 together with her family, said she was “very grateful to America and, of course, Hoosiers for opening their hearts and their arms when we arrived in Indianapolis. … They became our mentors—they taught us about the economy, American culture, and it helped us to be successful, so it’s time to give back.”

She said her opponent hasn’t done much in the district or introduced policies to help it or the United States: “At this point in time, I feel that I am the only one who can challenge him on the issues he is introducing in Congress.”

On Carson’s ties to Farrakhan, she said his family has known him for years, and that “Farrakhan came to Indianapolis for Julia Carson’s [André’s grandmother] funeral and delivered the eulogy.”

A few months ago, she added, “the Republican Jewish Coalition called for the resignation of seven Democratic members of Congress, including Carson, because of their connections with Farrakhan. He [Carson] became more radicalized over the past couple of years, especially since he got support from [Reps.] Ilhan Omar [D-Minn.] and Rashida Tlaib [D-Mich.],” who have consistently made anti-Semitic statements and votes in their few years in the House.

Grabovsky is also disappointed in the Biden administration’s Mideast policies, especially its desire to re-enter the Iran nuclear deal—the Joint Comprehensive Plan of Action, or JCPOA.

She said “unfortunately, the liberal Jewish community in the United States supports rejoining the Iran deal,” adding that discussions with left-wing Jewish clergy members on the issue left her with the impression that “Israel will have to defend herself by herself.”

Grabovsky said she was glad to be back visiting, as her last trip to the country was five years ago.

“Even though [Israelis] live in this world of uncertainty because of some of the neighbors they have, people are enjoying life,” she pointed out. “In other countries or even in America, you don’t see as many smiles on their faces that you do here.”