(June 21, 2022 / JNS) A new Israeli-made missile has been unveiled at Paris’s Eurosatory defense exhibition that took place from June 13 to June 17.

Rafael’s Spike non-line of sight (NLOS) sixth-generation precision missile is designed to strike distant targets and can be launched from helicopters, ground units or sea vessels. It is brimming with some of the latest technology available in the world of missiles, but its origin as a concept can be traced back to the 1973 Yom Kippur War, when Israel was surprised by attacks from Egypt and Syria.

During that time, the Israeli army’s land forces did not have the ability to strike the advancing Egyptian and Syrian armor accurately from long range, and the lack of such a capability was costly in the lives of fallen soldiers.

Had Israel possessed long-range (known as “standoff” in military terms) firepower at the time, it could hit enemy tanks without entering their firepower range.

It was that realization that led the Israeli defense establishment to order Rafael Advanced Defense Systems to develop the first generation of Spike missiles in the 1970s, with the requirement being that the missile—known in Hebrew as Tamuz—has a bigger range than a tank’s own 3-kilometer (1.8-mile) shell range. Designers got to work creating a missile that could travel at least six to 12 kilometers (3.7 to 7.4 miles) as an urgent operational need.

The first successful trial of the missile was held in 1979, and military history had been made. In 1982, the Israel Defense Forces took possession of the first Spike missiles, which were at initial operational capability; however, it was in no rush to use them, despite the outbreak of the First Lebanon War. The first Spike battalion, in fact, remained a secret and was disguised as an ordinary M113 armored personnel carrier. A subsequent version was disguised as an ordinary tank. The missiles were also placed on-board Cobra attack helicopters.

Since then, Spike developed multiple generations and evolved. By the 2000s, the Spike long-range fourth-generation missile, dubbed Gil, appeared in the IDF, and later, other generations appeared. Gil is a fire-and-forget missile that can hit enemy coordinates.

But none were used because Israel wanted to ensure that it had a secret standoff missile in store in case it again came under attack from enemy tank formations.

Over the years, Rafael sold some 37,000 Spike missiles around the world to some 40 countries, placing it as a giant missile exporter on the world stage—on the same level as American corporations Lockheed Martin and Raytheon. Rafael became a major global tactical-missile producer.

In 2021, the U.S. military signed an intermediate acquisition deal to place the Spike on its Apache helicopters. Rafael is working in partnership with Lockheed Martin on producing Spike in the United States. 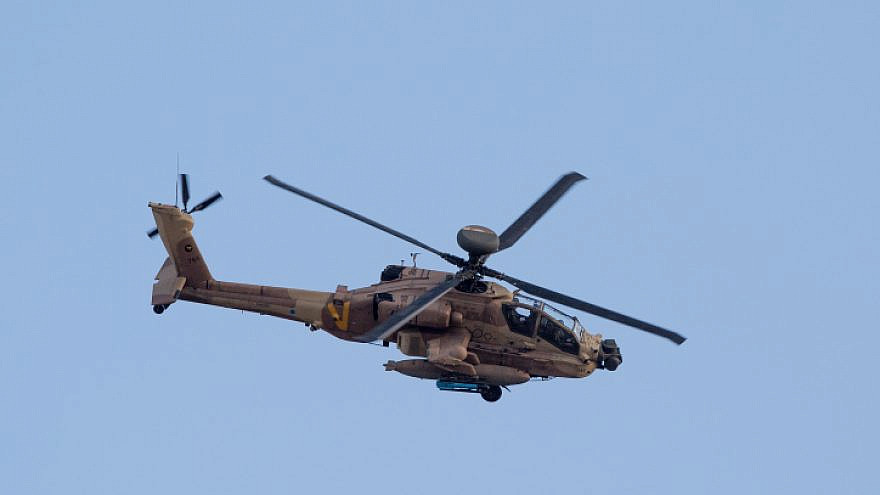 An Israeli Apache helicopter at an aerial show in honor of an Israeli Air Force Flight Course graduation ceremony at the Hatzerim Air Base in the Negev Desert, Dec. 29, 2016. Photo by Miriam Alster/Flash90.

Now, the sixth generation has arrived, and one of its key capabilities is analyzing visual target data as it flies through the air. As it travels, it provides real-time intelligence and operators can adjust targets or abort missions midflight, according to a Rafael company statement.

A single launcher under the control of a single operator can launch and control salvoes of up to four missiles simultaneously, said Rafael, adding that “this new capability enables operationalizes the element of surprise and creates an immediate, significant effect.

Another new feature of the Spike sixth-generation missile is its ability to be transferred between the launch operator and another operator, such as a unit sitting in an armored vehicle in the field, in mid-flight for improving performance.

“For example, if a helicopter launches the missile against a high-value target but continues flying outside the threatened area, a ground vehicle in that area or attack-zone vicinity can gain control of the launched missile and navigate it towards the original target. This transfer of control enables seamless collaboration between systems and an uninterrupted operational pace,” said Rafael.

The missile employs a special Rafael technology called image-matching, meaning that an onboard computer compares pre-loaded images of target areas for its cameras “see” for navigation purposes.

“Target images can be matched with the missile’s video images during flight, designating a target to the appropriate operator,” explained Rafael. “This ability is especially useful when dealing with several similar targets or objects.”

If the missile identifies multiple enemy tanks, its target-image technology can distinguish between them and identify the commander’s tank or the most critical enemy asset, selecting it as the objective. “This allows for minimized collateral damage and higher effectiveness, especially in more dense urban settings,” the company stated.

In Eastern Europe, even prior to the Russian war on Ukraine, there was a demand for Spike missiles. Now, as countries around the world study lessons from the war, it is reasonable to expect demand to only grow further.

Much of the computing power required for the sixth generation was placed on the launcher to save the missile from needing to consume too much electricity or carry unnecessary weight.

Remarkably, most of the key changes in the sixth-generation missile come in the form of new algorithms and artificial intelligence, and less on the hardware side. This means that Rafael can convert any existing fifth-generation Spike missiles into sixth-generation ones.

More than half of the 37,000 Spike missiles made so far have been produced abroad, as part of Rafael’s technology sharing policy, which is useful to its chances of gaining contracts by involving local partners.

Italy and Spain, for example, today produce their own Spike missiles. In Germany, Rafael’s subsidiary, Euro Spike, is active and can travel to any state to make missiles.

The Spike sixth-generation iteration will be available as a product from 2023 after trials are complete.