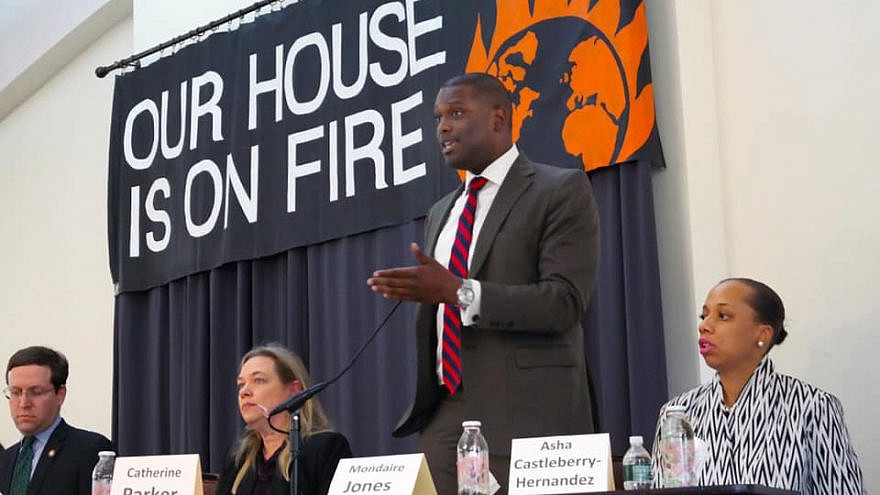 Jones, 33, worked in the U.S. Department of Justice during the Obama administration and has worked as a lawyer in other parts of the public sector.

JNS talked with Jones by phone on Dec. 10. The interview has been edited for brevity and clarity.

A: My stance is that the United States should continue to be a close ally of and partner to Israel. One that works in earnest to achieve a two-state solution [with the Palestinians], so that we can get lasting peace and security in the region and, of course, ensure that everyone is able to live with dignity.

A: I’m always careful not to conflate what is happening … there is great diversity within the Jewish community, and there are a number of people in my district who care very deeply about the State of Israel and its security, and the ability of its residents to thrive.

A: Not one. But I’m looking forward to going there as soon as there can be travel for the congressional delegation.

Q: You would be going with AIPAC?

A: I have not publicly said with whom I’ll be going to go to Israel.

Q: Any reason why you haven’t gone public with that?

A: Because I haven’t decided.

Q: Are there any of U.S. President Donald Trump’s pro-Israel policies that you’ve agreed with—for example, the Abraham Accords?

A: I support the normalization of relations between Israel and its surrounding Arab nations. I think that we could’ve gotten to this point much sooner under a different president, such as Hillary Clinton or [U.S. President-elect] Joe Biden, and I think it is despite Trump’s efforts that we’ve been able to make progress in that regard.

Q: So you do not give the president credit for brokering the Abraham Accords?

A: Absolutely not. I think he has done more to harm the State of Israel than any president in modern history. His political approach to the region has been to inflame tensions between Arabs and Israelis.

Q: Who do you give credit for brokering the accords?

A: Oh, goodness. The diplomats who have been working in the State Department on a career basis, and, of course, both the Israeli government and leaders in the Arab world for finally coming together and making strides towards the peaceful environment that so many people have been hurting for many decades.

Q: Are there any parts toward the president’s strategy towards Iran that you agree with?

A: I’m going to push back on your question and just talk about what I believe because I don’t think it should be a Mondaire Jones versus Donald Trump, who’s on his way out of office, type of discussion.

I support the Iran nuclear deal, and I’m really proud to be joined by so many folks in the United States Congress, including Nita Lowey, who opposed the withdrawal from the Iran nuclear deal, understanding it was highly successful in getting Iran to end its dangerous nuclear-weapons program and, of course, as soon as we withdrew from that agreement, we saw Iran resume that activity. I’ve been really distraught to see the assassination of Iran’s leading nuclear scientist [Mohsen Fakhrizadeh], and I’m hopeful that has not destroyed the conditions that will allow for us to seamlessly re-enter that agreement.

Q: How do we best combat anti-Semitism at home and abroad and, especially as someone who is progressive and LGBTQ, why do we see those camps overall exhibit hostility towards Israel?

A: I’m going to take issue with the latter part of that question and talk about what we need to do to reduce and, in fact, eliminate anti-Semitism.

We have seen that rise occur at the same time that Donald Trump has been in office over the past four years. He has embraced white nationalism and encouraged its adherents. As part of that, he encouraged anti-Semitism.

What we have to do is have real leadership in this country and call out anti-Semitism wherever it exists and also allocate sufficient resources, especially to people in the K-12 space, to educate them about the history of anti-Semitism in this country and throughout the world, including the important lessons of the Holocaust. And, of course, we have to be allocating security assistance to our Jewish nonprofits, and other centers and synagogues.