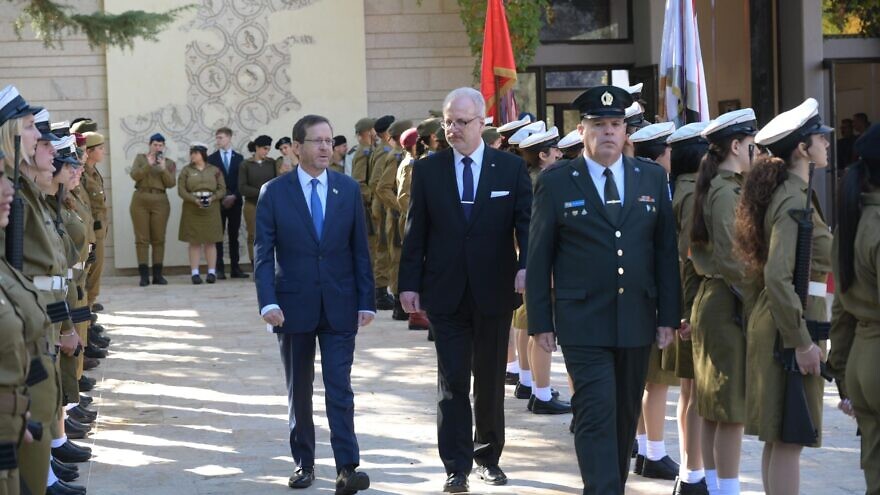 Speaking at a press conference, Herzog hailed the “shared values” and “common interests” underpinning bilateral ties between the two countries, which he said were “natural allies.”

“We are extremely happy to have you, because we are two natural allies, Mr. President. In the 30 years since our two nations established bilateral relations, we have built a warm partnership based on shared values and common interests,” said Herzog.

Herzog noted that Israel is home to many Jews of Latvian descent, some of whom, he said, had left “an incredible mark” on Latvian history.

“Israel places great importance on continuing to enhance and deepen our bilateral relations with Latvia as well as all three Baltic states,” he continued. “We look forward to using this visit as an opportunity to discuss avenues to increase our partnership, with a focus on trade, and commerce, joint scientific research, and academic collaboration.”

Herzog also noted the passing by the parliament in Riga in February of a bill seeking to provide compensation for unrecovered Jewish property lost during the Holocaust, and funding for the country’s Jewish community.

The Law on the Compensation of Goodwill to the Latvian Jewish Community approved $40 million over the course of 10 years in support for Latvia’s Jewish institutions and cultural projects, and for social and material assistance to Holocaust survivors.

Levits thanked the Israeli president for receiving him on his first official visit to the Jewish state, noting the significance of the timing of his visit.

“Thank you, Mr. President, for organizing and receiving me for my first official visit in Israel. It is very important to have this state visit for our bilateral relations, because this year is the 30th anniversary of the establishment of diplomatic relations between our states,” he said. However, he continued, “Of course the ties between our nations are much historically deeper and longer.”

The Israeli president along with first lady Michal Herzog were scheduled to host a state dinner on Monday evening in honor of Levits and his wife.