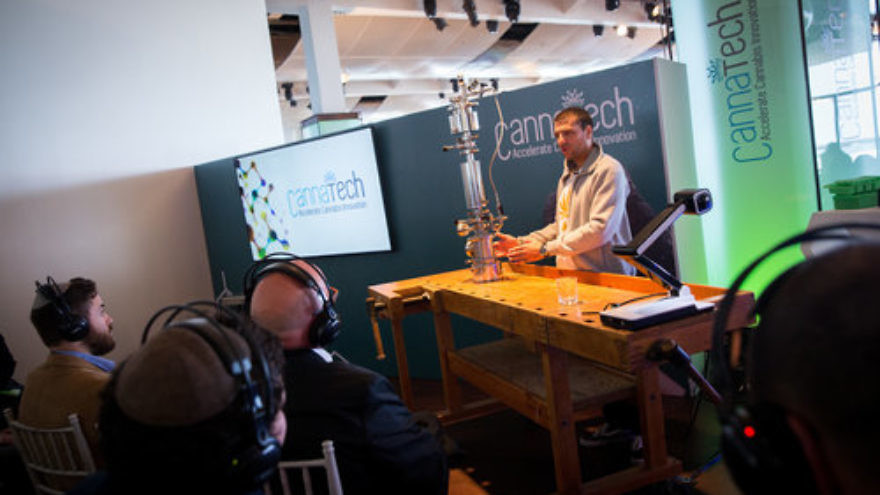 The Israeli organization’s stated mission is “to identify, invest, accelerate and showcase cannabis innovation for the global cannabis economy.” At the U.K. gathering, industry professionals and enthusiasts will network and enjoy a series of TED-style lectures at what will be Britain’s first-ever international conference on innovation in this field.

Although CannaTech is an Israeli brand, the U.K. event has been curated specifically for a British and European audience, and will provide a broad overview of the latest cannabis research, medical applications and scientific innovations in Europe and globally.

Israel can offer European countries expertise on “how to grow [medical cannabis], how to build a sustainable industry that crosses into pharmaceuticals and regular distribution, how to get medical access to patients before the science is in,” Saul Kaye, CEO of iCAN, told JNS.org.

The event will address cannabis regulation challenges unique to Europe, and facilitate a special investor symposium—a day before the main event—showcasing cannabis investment opportunities and start-ups.

According to Kaye, the U.K. was selected to host the first CannaTech conference outside of Israel in part due to Britain’s history of encouraging debate through its parliamentary style of government. The U.K. was also picked based on the belief that dialogue will lead to normalization of medical cannabis in the country, while assisting British lawmakers with making informed decisions on the future of the plant in the U.K.

“We chose the U.K. because they’re behind in medical cannabis policy and they have a lot to learn from Israel,” said Kaye. “We have patients [in the U.K] that we know are in desperate need, and London is a financial hub of the world, so we felt it prudent to bring CannaTech there and so far we’ve been proven right.”

He added, “There’s a lot Israel can learn [about medical cannabis] from foreign countries as well.”

“While CannaTech has established itself as a leading voice in the industry, it (the conference) is part of the bigger picture of iCAN: Israel-Cannabis (the organization),” Kaye said.

“As a pharmacist, my passion is in formulation, and we are working together with our partners to bring game-changing pharmaceutical grade cannabis products to market with innovative delivery methods,” he said.

Kaye noted iCan’s “technology pipeline…is robust,” and that Israel provides a leading regulatory framework for research in the field. He said iCan welcomes innovative companies from around the world “to be in touch as we are heading to an environment where a formulator in California who cannot move beyond state lines can reformulate in Israel and then move their products globally.”

Indeed, in countries such as the U.S., the ability to research the plant is nearly impossible because of the status of cannabis as a Schedule I substance.

In recent years, Israel has become a hub for the study and distribution of medical cannabis. Hebrew University’s Prof. Raphael Mechoulam initially discovered THC, the primary psychoactive compound in the cannabis plant, in the 1970s. Since then, Israeli hospitals have demonstrated a willingness to perform clinical trials on the effectiveness of cannabis in relieving the symptoms of tens of thousands of patients suffering from chronic or terminal conditions.

“Israel’s medical cannabis program is the oldest and most advanced in the world,” said Kaye. “Our regulatory environment allows for clinical trials to test efficacy on a variety of illnesses and our government has even provided grants for several cannabis companies.”

In addition to becoming a leader in medical cannabis research and development due to its unique regulatory environment, Israel stands to generate large profits from this industry.

In March, the Knesset legislature passed a new law essentially decriminalizing recreational marijuana use nationwide, and in August, a joint committee of the Israeli Health and Finance ministries approved a new measure allowing for international exportation of the plant. According to some reports, Israel could earn up to $4 billion annually in revenue from medical cannabis exports.

Prior to the measure’s approval, several European countries expressed strong interest in importing Israeli medical cannabis and applied for permission to do so, including Germany, Denmark, the Czech Republic and Cyprus—making it high time for the upcoming CannaTech UK conference, which caters specifically to the medical cannabis needs of European nations.