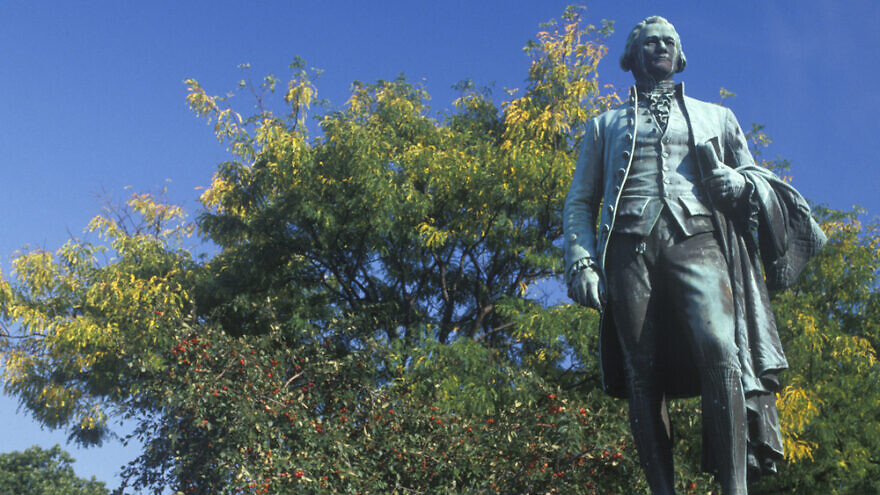 (August 17, 2021 / JNS) A historian is claiming that Alexander Hamilton, the country’s first Treasury Secretary who was instrumental in the ratification of the Constitution and whose popularity has risen in recent years due to the musical “Hamilton,” had Jewish ties as a child in the Caribbean.

“The balance of evidence suggests that Hamilton in all likelihood had a Jewish identity in his youth in the Caribbean,” said Andrew Porwancher, a professor of history at the University of Oklahoma and author of the book The Jewish World of Alexander Hamilton, reported Bloomberg News.

Porwancher went on to explain that he believes Hamilton’s mother, Rachel Faucette, who was born a Christian in the British Caribbean, converted to Judaism to marry a Jewish merchant named Johan Levine.

“Although she bears Alexander out of wedlock to a non-Jew, in all probability she chooses to raise him in her adopted faith of Judaism,” he claims.

Porwancher, who spent years studying archives in the United States and in the Caribbean, further adds that the founding father and co-author of the Federalist Papers likely had some Jewish education while growing up on the island of Nevis, where 25 percent of its free population was Jewish.

“There was a Jewish school that Hamilton later told his children that he attended, where we know he began at least rudimentary study of the Torah because he recalls how his teacher would put him on a table so it would be eye level, and he would recite to her the Ten Commandments in Hebrew.”

Hamilton was born in either 1755 or 1757 in Nevis, which was a British colony at the time. He was orphaned in 1768 after his mother died of yellow fever. Upon arriving in New York in the early 1770s, Hamilton was known to have close ties with the city’s Jewish population, according to Porwancher.

“We find in Hamilton a closer relationship with the American Jewish community than we find in any other founder. In a variety of forums—from the marketplace to academia to the courthouse—he’s committed to securing equality for America’s Jews,” he said, noting that Hamilton had a particularly close relationship with Rabbi Gershom Mendes Seixas of Congregation Shearith Israel, New York City’s first Spanish and Portuguese synagogue.

He also notes that Hamilton experienced anti-Semitism, with his opponents attacking him over his ties to the Jewish community and his financial programs as Treasury Secretary.

“He’s pro-city, he’s pro-finance, and to some extent, he’s pro-outsider, and those are all things that Jews get lambasted for through history,” he said. “Hamilton is the visionary for America’s future, and Jews, by virtue of their marginality, were effectively forced to become modernizers in order to survive.”

Despite Porwancher’s claims, most historians do not believe that Hamilton was Jewish and have even cast doubt on whether or not Johan Levine (most historians spell it as Lavien), was Jewish either. As an adult, Hamilton did not identify as Jewish, and no evidence exists that he ever spoke about any Jewish heritage.

On his deathbed after being shot in his infamous duel with Aaron Burr, he accepted communion from the episcopal bishop of New York and is buried at Trinity Church Cemetery in New York City.