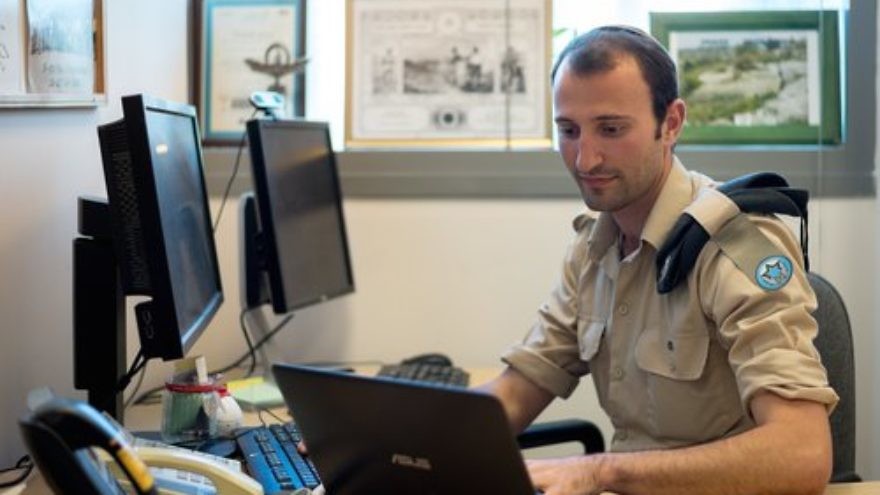 Sgt. Ilan Regenbaum (pictured), an American immigrant to Israel who grew up in Atlanta, was supposed to complete his military service in the Israeli Air Force's Innovation Department a year ago, but stayed on due to his love for the work. Credit: IDF.
Republish this article
971 WORDS
Spread the word.
Help JNS grow!
Share now:

High up in the Israeli Air Force’s (IAF) building at military headquarters in Tel Aviv, a unique department is hard at work, bringing problem-solving techniques from the world of high-tech firms into the Middle East’s most powerful air force.

Founded a little more than three years ago by Maj. Omer Yuval, a former combat soldier who went into the private sector before returning to the military, the small IAF Innovation Department is mostly staffed by immigrants, many of whom have worked at high-tech giants like Google and IBM, where they developed cutting-edge technologies such as artificial intelligence.

The unit became highly active and increasingly influential during the past year, Sgt. Ilan Regenbaum, an American immigrant to Israel who grew up in Atlanta, told JNS.org.

South African-born Regenbaum was supposed to complete his military service in the department a year ago, but stayed on due to his love for the work. His background is typical of many of those in the department. He has a degree in finance and business management from New York’s Yeshiva University—though Regenbaum’s journey into the world of business began much earlier, when he was in middle school. At the time, he launched his first start-up, an events photography company that still exists today. In 2013, Regenbaum arrived in Israel on a Birthright Excel program, a visit that he says led him to discover the “start-up nation.”

A year later, he immigrated to Israel, and went to work for a start-up before moving to a venture capital firm. He then joined the IDF.

Today, Regenbaum said his IAF department works around the clock for “the goal of increasing the culture of innovation within the air force, and the military….not so much on the technological side, but more on the side of culture and organization—the way the air force functions.”

Many of the department’s projects cannot be publicized for security reasons. But Regenbaum affirmed the department is injecting techniques that are commonplace in major firms like Google and Facebook into the heart of the IAF.

“[Tech giants] don’t have a head of innovation, because it’s in their DNA to be innovative,” said Regenbaum. “It means that an employee, whether they are a 20-year veteran, or a first-year, have mechanisms and pathways to bring up problems and ideas, and be taken seriously.”

When Google allowed employees to work on their own projects, one of the results was Google Sheets, which is now a huge part of the internet giant’s business application—“all because one person said, ‘Give me a few developers, give me a few designers,’” Regenbaum noted.

“In the military, when you see an opportunity or problem on the ground, for us, it’s more of a challenge,” he said. “We are not a revenue-based organization…if a soldier or officer says, ‘Here’s an issue, let’s fix it,’ or, ‘Here’s a project that can save millions of shekels, or improve the lives of tens of thousands of soldiers,’ how do you manage all of that in a structural, regimented organization?”

During the past 18 months, the IAF Innovation Department has started doing just that. It has allowed soldiers who see problems on the ground, or have ideas on new ways of working, to list their proposals on an air force computer system that is linked to officers who are authorized to make decisions. “Our goal is to connect decision-makers with the need-knowers,” Regenbaum said.

The computer system, known as the “innovation platform,” is available to any soldier of any rank. Recently, a soldier used it to ask the air force if there was a way to automate a mundane data entry task. Sure enough, the Innovation Department helped create a computer script that ended up saving the inquiring soldier’s unit 200 work days per year.

The department is now encouraging soldiers to change the way they think about problems. “If you really want to complain, come up with a better way of complaining,” Regenbaum said, adding that complaints should lead to solutions.

The Innovation Department is also attempting to develop a platform that will enable IAF personnel to hitchhike safely.

“It is highly illegal and dangerous for soldiers to hitchhike,” Regenbaum explained. “We have many terrible stories. But if anyone’s ever been on a train on a Sunday morning heading up north, or down south, you’ve been inundated with soldiers and these giant backpacks. So why is it that in the world of Waze Rider and Moovit Carpool, a soldier can’t open his application and see that there are 20 officers driving army cars in his neighborhood?”

The department also runs an accelerator, a concept borrowed from the start-up ecosystem. Teams work on identifying core problems and then draw up a list of solutions, which they present to a senior officer.

“Airbnb went through a Y Combinator accelerator when it was two founders working out of an apartment,” Regenbaum said. “Now, it is a multi-billion dollar company. We in the IAF have ideas, and we have top, top people. How do we connect them through this mechanism. We take a problem, and for 10 weeks, teams work on it. Our version functions like a start-up accelerator. In a number of weeks, the teams will be presenting all of their research in front of a panel of officers from the air force, as well as some civilian experts.”

In recent months, soldiers from the department have facilitated a course at Tel Aviv University for IAF members, in which they heard lectures about innovation from representatives of large companies.

“While different in many ways, we view the air force as being, at the end of the day, an organization with tens of thousands of people,” said Regenbaum, “with challenges, like other organizations.”