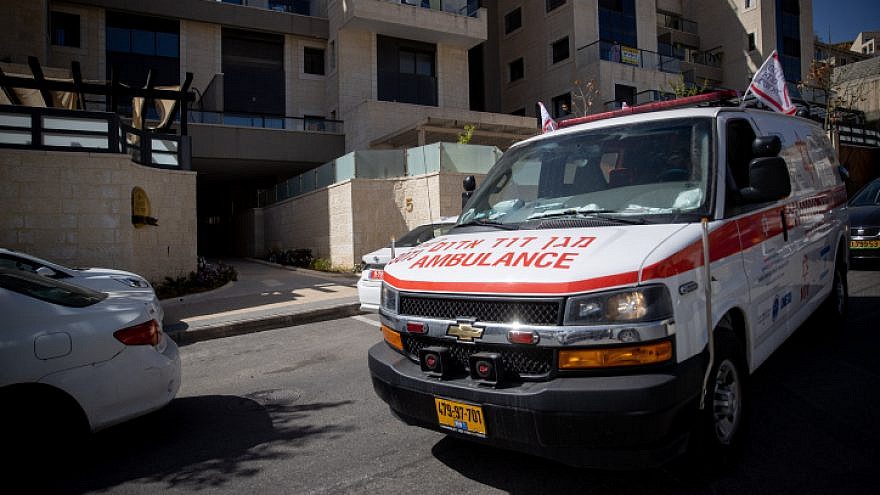 Israeli police and paramedics outside the home of the former ZAKA chairman Yehuda Meshi Zahav, in Givat Ze'ev, Jerusalem, where he attempted suicide earlier in the day, April 22, 2021. Photo by Yonatan Sindel/Flash90.
Spread the word.
Help JNS grow!
Share now:

(April 22, 2021 / Israel Hayom) Co-founder and chairman of the ZAKA emergency service Yehuda Meshi Zahav, who is in critical condition following a suicide attempt on Thursday morning, left a suicide note in which he asks that his good deeds be remembered.

Meshi Zahav resigned from the organization in March after multiple allegations of sexual assault surfaced against him. He also gave up the prestigious Israel Prize, which he was to have received later this year.

In the letter, which was found in his Givat Ze’ev home, he wrote: “I am sorry. I have already received my punishment, and please make an effort to remember me for the good things I have done. I have always loved and I feel very much ashamed.”

“Remember what I have forgotten. An eye that sees, an ear that hears, and all your deeds are written in a book,” he said, quoting Jewish scripture.

Magen David Adom paramedics were called to the family home in the Jerusalem suburb of Givat Ze’ev in the early hours of Thursday morning and carried out resuscitation efforts on Meshi Zahav, who was rushed to the Shaare Zedek Medical Center in Jerusalem.

According to the hospital, his condition is critical but stable, and that he was sedated and intubated. It is believed the suicide attempt has left him with a hypoxic brain injury.