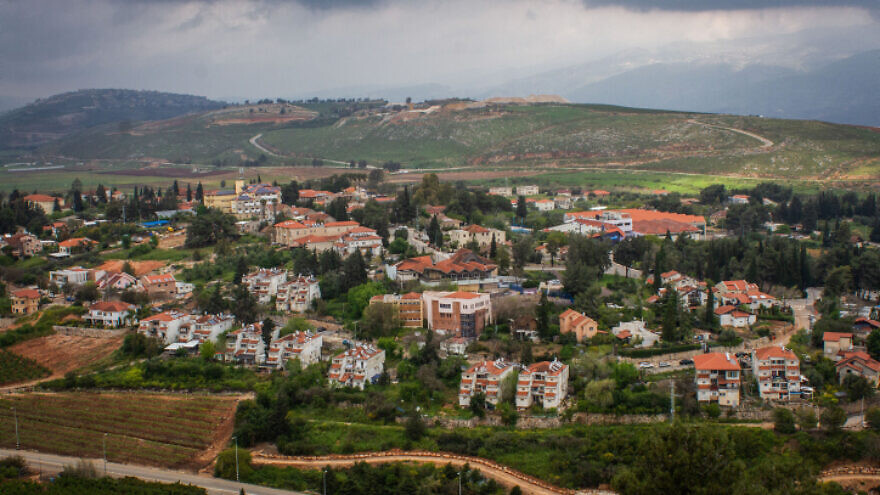 View of the northern Israeli town of Metula near the border between Israel and Lebanon on April 20, 2019. Photo by Flash90.
Republish this article
765 WORDS
Spread the word.
Help JNS grow!
Share now:

(December 14, 2021 / JNS) The Israel Defense Forces’ Home Front Command is working intensively to fortify the homes of communities on the northern Israeli border with Lebanon against Hezbollah’s array of rocket and mortar fire threats.

The project, dubbed “Northern Shield,” began in 2018 and received cabinet approval, as well as a partial budget, but it did not receive the required 500 million shekels ($160 million) per year for 10 years due to political instability and the failure to pass a state budget.

This changed when the project received 250 million shekels ($80 million) as part of the new 2022 state budget under the new government.

A joint agency set up by the IDF, the Defense Ministry and the Amigur Assets management company began mapping out homes that are eligible for the construction of rocket-proof fortification.

A senior Home Front Command source told JNS that the project began going operational over the past month in the northern community of Kfar Yuval, which sits directly on the border.

“We thought about how to move forward and decided that the first 100 million shekels [$34 million] will go to nine communities out of the 21 communities located in close proximity to the border. Within each community, homes that lack any secure rooms built to withstand rocket and mortar strikes will be the first candidates,” explained the source.

“In the next stage, we will reach those who have protected structures and improve their concrete barricades,” he said.

“The challenge is very big,” said the source, in no small part due to the fact that some of the homeowners lack building approvals, which are required for constructing new safe zones.

As a result, the authorities decided that to avoid stalling the project, measures would only go ahead in communities where 75 percent of inhabitants have building approvals.

According to the plans, the Home Front Command will oversee the construction of 54 safe zones in Kfar Yuval. Next year, tenders for building safe zones in several additional communities will be launched.

“As soon as we received the budget of 250 million shekels, we began mapping out 12 communities. We know how many safe zones need to be built as part of the first stage,” said the source.

Homeowners found not to be eligible for the program and who might already have other versions of safe rooms, can apply to an exemptions committee. They could claim that the safe room is inaccessible, for example, and the inter-office exemptions committee, which meets once a month to examine applications, could agree with the request.

“We are trying to do this as fast as we can,” said the source. “Civilian homes are Israel’s soft underbelly. We are not preparing for anything specific; rather, we are managing the project.”

The source said that authorities are also “working on regulatory incentives to encourage civilians to build fortification themselves,” he said. Versions of safe zones made of complex materials by companies in Israel and abroad could provide solutions in this regard.

“We want to move as fast as possible and implement,” said the source.

‘Making them ready for missiles and earthquakes’

Asked if the new fortification could enable civilians near the border to avoid evacuation in the event of a new war, the source replied by saying multiple factors would shape the answer, including the state of civilian resilience.

While a stronger fortification could make the decision to stay put easier, those without the fortification would have “no dilemma,” and evacuate themselves and their families, he said.

Once equipped with safe zones, residents near the border can combine their defenses together with siren alerts and other tools that could enable them to remain in their homes and deal with the conflict.

“It is difficult to say,” said the source. “People are different. Some get up and go, but not everyone has somewhere to go. [Our aim is to] provide people with greater security.”

Ultimately, for the program to complete fortification in 21 communities, it will need an overall budget of 5 billion shekels, or about $1.6 billion. The fortification work is also planned to address other threats in relevant areas, such as earthquakes in Kiryat Shmona.

“We are working with the Housing Ministry on a project that promotes evacuation and reconstruction of buildings, making them ready for both missiles and earthquakes,” said the source.

“It is also important to remember that ‘Northern Shield’ is not only about private homes but public institutions. Our emphasis is on education—special education—health and welfare,” he said. “Ultimately, if those seeing refuge in such places don’t receive fortification, this will bounce back to the IDF, which will need to evacuate people in beds—creating a whole different challenge.”