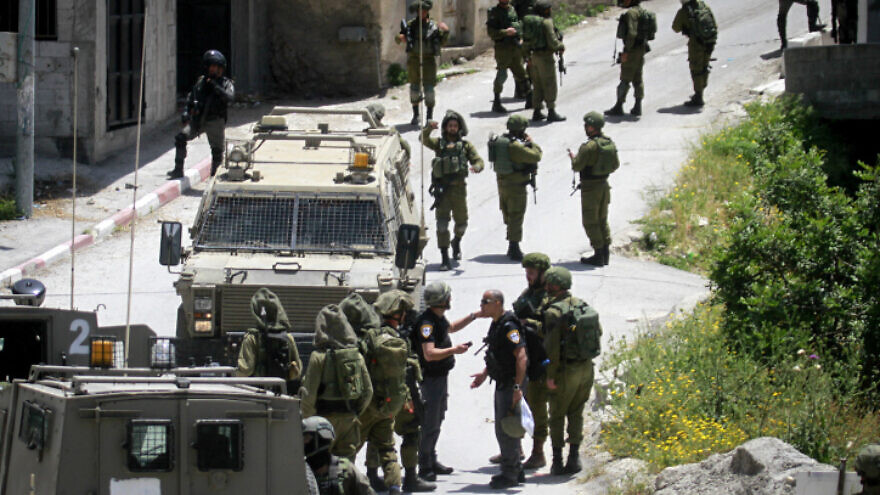 (April 10, 2022 / JNS) Israeli forces over the weekend conducted an extensive counter-terrorism operation in the Palestinian village of Yabad, near Jenin. The village was the home of the Palestinian terrorist who went on a shooting rampage in Bnei Brak on March 29, murdering three Israelis and two Ukrainian nationals.

Soldiers from the elite Egoz, Shayetet 13 and Sayeret Golani units took part in the operation in northern Samaria.

Security forces arrested eight terror suspects, the Israel Defense Forces said, while Egoz unit members scanned the village for illegal weapons. The soldiers found IDF ammunition and military uniforms in the home of one of the suspects, according to the military, as well as an explosive device that was intended for use in a future terror attack.

“During the activities, the forces employed riot dispersal means and fired shots as they acted to deal with violent disturbances,” the IDF said. The forces also fired on a Palestinian who threw an explosive device at them, the military said, adding that there were no Israeli casualties.

On Saturday, IDF and Border Police forces surveyed the Jenin home of the Palestinian terrorist who murdered three Israelis in Tel Aviv on Thursday night. The survey was conducted ahead of a planned demolition of the home.

During that operation, Israeli security forces, acting on intelligence from the Israel Security Agency (Shin Bet), arrested two wanted security suspects. The forces came under fire from multiple locations. A Border Police undercover unit returned fire, killing a Palestinian gunman, and seized the M-16 rifle he had been carrying, the IDF added.

A second Palestinian gunman who fired on the Israeli forces in Jenin, and who is on a Shin Bet wanted list, was seriously injured and was taken into custody, before being evacuated for medical treatment in Israel. According to Israel Hayom, the terrorist was airlifted by the IDF for treatment at an Israeli hospital.

Also on Saturday, IDF soldiers spotted a vehicle moving suspiciously in the area of the security barrier in northern Samaria, according to the military. A bag was thrown out of the vehicle, from which IDF forces recovered a submachine gun from the bag, which is an improvised  firearm made in Palestinian workshops.