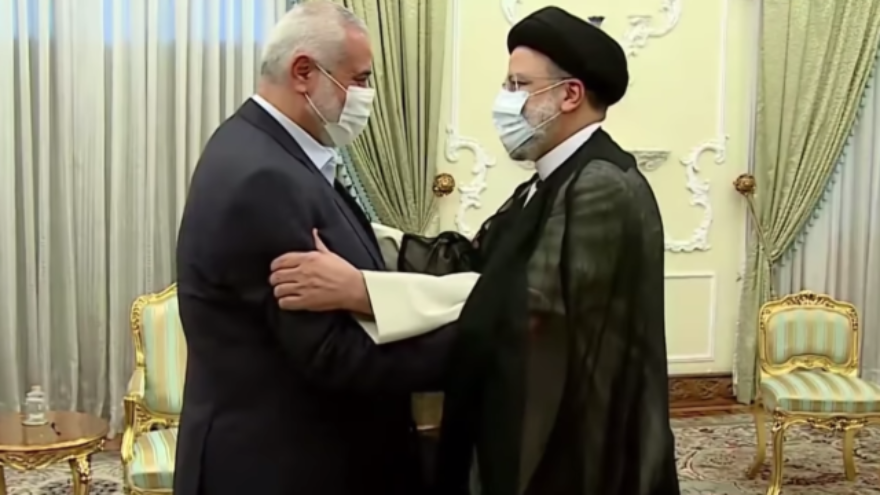 (August 8, 2021 / JNS) The commander of Iran’s Islamic Revolutionary Guards Corps (IRCG) praised the head of the Lebanese terrorist group Hezbollah on Saturday for its might in the face of the “Zionist enemy.”

“While the strength of Hezbollah is increasing, the enemy’s power is in decline,” IRCG Maj. Gen. Hossein Salami told Hezbollah Deputy Secretary-General Naim Qassem during a meeting in Tehran, according to Iranian media.

The meeting took place a day after Hezbollah fired 19 rockets at northern Israel and two days after the swearing-in ceremony of Iran’s new president, Ebrahim Raisi, which Qassem attended.

Raisi, who met with Qassem on Friday, also lauded the terrorist group.

Shamkani congratulated Haniyeh for what Fars called the “brilliant achievements” of the “Palestinian resistance movements” in the latest round of fighting in May, and the “pivotal role of [Palestinian] Islamic Jihad and Hamas in fighting the Israeli regime and inflicting defeat on the occupiers.”

“The collapse of this fake regime is possible in the near future if all resistance groups unite under the cause of Palestine and Holy Quds [Jerusalem],” Shamkhani said, as Hamas launched arson balloon attacks from Gaza into Israel.

Raisi expressed a similar sentiment during his own meeting with Haniyeh. According to Fars, the newly instated Iranian president stressed that the Islamic Republic would continue to support Palestine, which “has been and will be the first issue of the Muslim world.”

“We have never had and will never have any doubt about this policy,” said Raisi.

Haniyeh responded by acknowledging Iran’s support for the “oppressed Palestinian people,” stating that, as a result, “today, the Zionist regime is weaker, more confused and more desperate than ever.”

Referring indirectly to the Abraham Accords, reached last summer between Israel and the United Arab Emirates and Bahrain—with others following suit—Haniyeh criticized those Islamic countries who claimed to support the Palestinian cause, but have “established relations with the Zionist regime, whether overtly or covertly.”