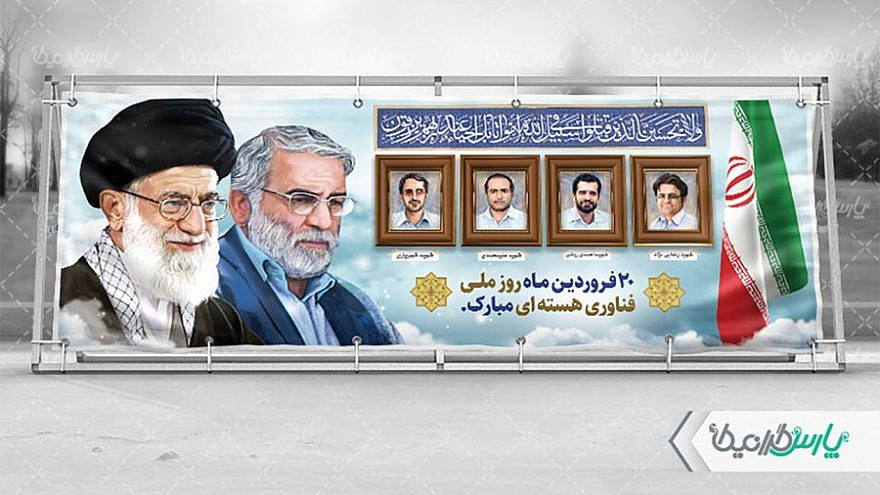 While National Nuclear Technology Day is held annually in Iran, this year it coincided with a meeting in Vienna between Iran and the Joint Committee on the Nuclear Agreement (its 18th meeting), which was intended to return the United States to the 2015 Joint Comprehensive Plan of Action (JCPOA) nuclear agreement. U.S. representatives, headed by Robert Malley, the administration’s special envoy for Iranian affairs, were in Vienna and ostensibly had no direct contact with the Iranian delegation headed by Abbas Araghchi, Iran’s deputy foreign minister and head of the Iranian delegation. According to Araghchi, the United States “did not have Iran’s permission to attend the discussions.”

Araghchi reiterated Iran’s call for the lifting of all sanctions at once and rejected U.S. statements that this Iranian demand indicates a lack of seriousness. He declared, “The lack of seriousness rests on the American side since it left the nuclear agreement and imposed sanctions and therefore must remove them at once.”

He continued, “The U.S. must lift anti-Iran sanctions, [and only] then Tehran would resume compliance with [the] JCPOA,” adding, “Iran will also want to verify the sanctions-lifting.”

Iran’s Supreme Leader’s website uploaded an illustrative checklist of the sanctions that must be lifted as part of a documentary regarding Iran’s stance and U.S. behavior in implementing the agreement.

Araghchi insisted that Iran’s negotiating position was based on a complete and “verifiable” end to all sanctions. Without verification of the lifting of all sanctions, no other way forward exists, he said. Araghchi reiterated that the lifting process has to be conducted in one go: “We do not believe in step-by-step or gradual revocation of sanctions. First, we have to verify the revocation of sanctions and only then we carry out our obligations.”

The Iranian foreign ministry spokesman rejected the U.S. proposal for negotiating a gradual and mutual outline, stressing that the talks were technical and were intended to ensure that the United States would fully return to compliance and effectively lift the sanctions in a verifiable fashion. At the end of the discussions last week, the Iranian diplomat said it was agreed that they would continue within the framework of two parallel expert committees, the first focusing on lifting the sanctions that the United States reinstated and imposed on Iran after it abandoned the nuclear deal in 2018. The second committee will focus on the nuclear response measures (violations) taken by Iran regarding the non-compliance of the United States and other countries to the nuclear agreement. At the end of the discussions, the committees will report to the Joint Committee on the Nuclear Agreement.

In contrast to the pessimism projected by the Iranian foreign ministry and its attacks on the negotiating positions presented by the United States, Iranian government spokesman Ali Rabiei presented a more optimistic position. Rabiei praised the “realistic” and “promising” positions presented by Malley, the U.S. Special Envoy for Iran, that “reinforce Iran’s position on the need for the lifting of sanctions” and could serve as a starting point for progress towards an arrangement and to correct the broken path that led diplomacy to a dead end.

“We welcome these statements and are eagerly waiting to see how this constructive approach will actually be implemented,” he said. The Iranian media quoted a Malley tweet and an interview with the American National Public Radio as strengthening Iran’s position.

Rouhani: ‘We did not sell out Iran’s nuclear program’

During a cabinet meeting ahead of the National Day of Nuclear Technology, Iranian President Rouhani challenged his critics to apologize to his government and the Iranian people, accusing them of “spreading lies among the Iranian people over the years.”

“Of course, no one bought it,” he said, adding, “However, they thought we sold out Iran’s nuclear energy sector when we signed the nuclear deal. … The lies were finally exposed.”

He also called on the critics to credit his government for lifting the arms embargo on Iran in October 2020 and for the downing of a U.S. drone in June 2019. Rouhani stressed the failure of the American “maximum pressure” policy and the Iranian people’s steadfastness during the sanctions.

“If it were not for people’s resistance and the endurance of hardships by them, we would have had different conditions today. Despite all the pressure, the enemy could not break our economy, and today they explicitly say that their actions have failed and that they have no choice but to negotiate,” said Rouhani.

Rouhani acknowledged that the “Strategic Measures to Lift Sanctions Law” enacted by the Iranian parliament (majlis) after the assassination of nuclear scientist Mohsen Fakhrizadeh, which his government opposed initially for fear of harming the nuclear agreement, had an impact when it came to “exposing Iran’s nuclear capabilities.” The law called on the government to raise the enrichment level to 20 percent, “but no one believed we would be able to do so. … The Atomic Energy Organization carried out the tasks set out by the parliament in the plan to revive the JCPOA even beyond the parliament’s law, which proved that what was said about the destruction of the country’s nuclear capabilities was not true,” he said.

In light of the joint committee talks in Vienna, Rouhani said, “We are witnessing a new chapter in the resuscitation of the nuclear agreement. … Everyone has come to the conclusion that another solution is different and there is no better way than its full implementation. … This is another achievement of Iran.” He added that “honesty and seriousness” on the part of the United States could pave the way for the success of talks between Iran and the P4+1 (France, Britain, Russia, and China + Germany).

Continued pressure on the United States

The Iranian pressure in the indirect negotiations with the United States was on display on Iran’s Nuclear Technology Day—presenting the projects and achievements in sensitive areas (enrichment, lasers and heavy water); emphasizing the sacrifice of Iranian scientists to achieve Iran’s nuclear goals; and continuing to violate nuclear restrictions blatantly.

Iran continues to present its systematic positions regarding the need to lift all sanctions at once, reinforced by the “vulnerable spots” exposed by senior American officials such as Malley, who push for a return to the nuclear agreement even at the price of American concessions. On the other hand, there is also growing pressure in the United States not to return to the nuclear agreement at any price, highlighting the issue of American hostages and missing persons in Iran.

It is possible that Iran will make a gesture on this issue to increase the pressure on the United States, but it is not expected to allow any discussion on missile issues, its activities in the region, and human rights violations in its territory. Admiral Ali Shamkhani, secretary of the Supreme National Security Council, made it clear again in a recent tweet.

This is especially so when the confrontation between Iran and Israel on the maritime front is reportedly escalating, which may lead to an escalation in other sectors, as well.

In this context, Iranian media have quoted extensively reports in the Western media that Israel is behind the sabotage of the Iranian Saviz cargo ship used by IRGC Navy in the Red Sea, and of other Iranian ships in recent months. Noting that the attack against the Saviz took place during nuclear talks in Vienna, the Tehran Times concluded, “Israel seems to be busy working to prevent the U.S. from returning to its commitments under the JCPOA. So if the U.S. is willing to revive the nuclear deal, then it needs to pay more attention to Israeli machinations.”