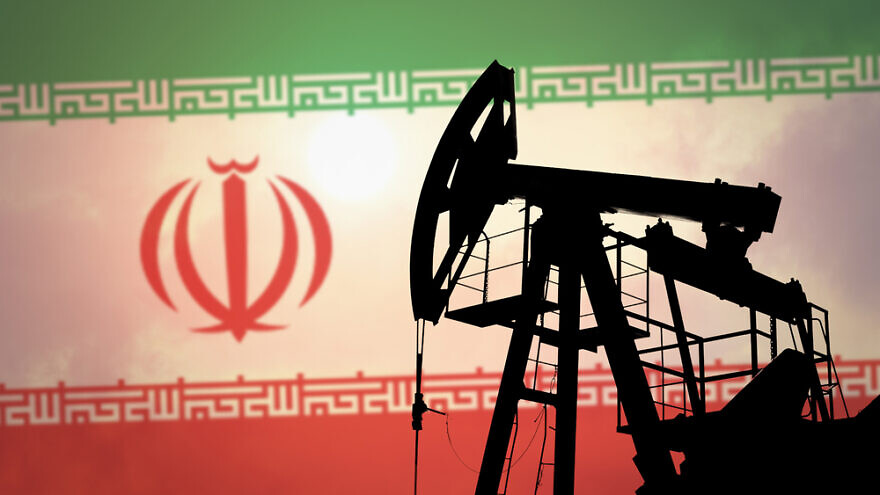 An oil pump on the background of the flag of Iran. Credit: Anton Watman/Shutterstock.
Republish this article
910 WORDS
Spread the word.
Help JNS grow!
Share now:

(August 27, 2021 / JNS) As Israeli Prime Minister Naftali Bennett meets with U.S. President Joe Biden in the White House in the midst of U.S. force withdrawal from Afghanistan, the Iranian file will soon take center stage. Experts tell JNS that existing sanctions are becoming problematic, as they tend to wear down over time as workarounds are found. They also say that the current administration has been lax in enforcing them—sanctions that were put in place by the former administration.

Patrick Clawson, a senior fellow and director of research at the Washington Institute for Near East Policy, tells JNS that in blocking Iranian energy exports, “the U.S. government’s objective has been to prevent Iran from getting resources it can use elsewhere.”

“While fuel exports to Lebanon are unlikely to produce money for Iran, they will give Hezbollah a potent way to raise cash, which means Tehran needs to send the group less. So such exports are a setback for U.S. policy,” he explains.

“Fuel exports to Afghanistan produce a flow of cash: We are talking small traders on both sides, and Afghan banks are not working,” adds Clawson.

Ariel Cohen, a senior fellow at the Atlantic Council think tank who consults businesses on risk assessment and energy worldwide, tells JNS, “To allow Iran to flaunt sanctions and supply fuel to Lebanon in violation of the sanctions will be a serious challenge for the Biden administration.”

With the ascendance of President Ebrahim Raisi to power, the pace of Iran’s aggressive moves that violated the sanctions regime is growing, including international piracy that has been seen this year in the Gulf, continues Cohen.

Iranian Foreign Ministry spokesperson Saeed Khatibzadeh said this week that Tehran is prepared to ship more fuel to Lebanon if needed. “We sell our oil and its products based on our own decisions and the needs of our friend. Iran is ready to send fuel again to Lebanon if needed. Certainly, we cannot see the suffering of the Lebanese people,” he stated.

According to Reuters, Iran restarted gasoline and oil exports to Afghanistan in recent days after a request from the Taliban, said Iran’s Oil, Gas and Petrochemical Products Exporters’ Union on Monday.

“Access to the frozen funds in Japan, Korea and India has been minimal because of the combination of official foot-dragging and commercial banks being unwilling to handle unauthorized transactions,” says Clawson. “I suspect the latter will continue.”

Iran has had greater access to its funds in China, he says. “This is mostly barter trade: The Chinese buyer pays into an account in a Chinese bank, which is then used to buy goods for export to Iran.”

Suppose the goods in question are humanitarian—food, medicine and such. In that case, explains Clawson, “this is theoretically permitted by the U.S. government. However, it wants to closely vet who is handling the transaction on the Iranian side to make sure no sanctioned entity, such as an IRGC [Islamic Revolutionary Guard Corps]-linked firm, is involved, and that simply does not happen.”

He notes that Iran has to accept a steep discount for the oil, which often involves transfers at sea from one ship to another and significant fees for the bank or trader involved.

“The Biden team has been pretty open at saying that if there is no progress in the [nuclear deal] talks, it will take additional steps to curtail such China trade,” says Clawson.

Those talks, however, are currently suspended.

Clawson says that the general rule about sanctions is that they erode over time; the sanctioned entity finds workarounds. “Keeping sanctions at a constant level requires a lot of work detecting and shutting down such workarounds. The Biden team has not been as active at this as was the Trump team.”

He assesses that “the status of the United States as the preeminent superpower will be aggressively challenged by China, Russia, Iran and North Korea, as well as the global jihadi organizations.”

“The top priority for U.S. foreign policy after rescuing its citizens and allies from Afghanistan should be to rebuild U.S. credibility,” he says.

“Suppose Iran flaunts U.S. conditions for the nuclear deal, and the Biden administration still insists on folding and concluding this transaction. In that case, it will further undermine its stature and credibility and damage the United States’ reputation with allies and foes alike,” adds Cohen.

Moreover, he continues, “to protect American interests in the region, the White House needs to include additional conditions to the deal, which would stop Teheran’s missile-building programs, support of proxies throughout the Middle East, including in Yemen, Iraq, Syria and Lebanon, and make the nuclear program more transparent and accessible to American and international inspectors.”

Without that, says Cohen, the Iran nuclear deal “is a petard that can explode the whole Middle East, the world and the remnants of American power and influence.”