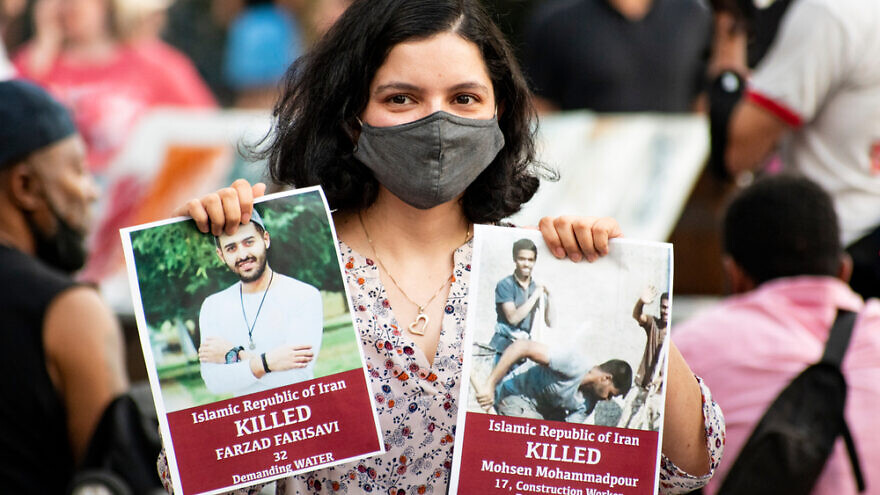 (August 5, 2021 / JNS) Demonstrations in Iran’s Khuzestan province—as a result of an ongoing drought and corruption with the government—and elsewhere have grown, though experts tell JNS that they are smaller than in 2019 so far and the regime will use its full force to stamp them out.

Reza Pahlavi, the son of the late Shah Mohammad Reza Pahlavi, told AFP in an interview published on Wednesday that the Iranian regime is on the brink of collapse, but support from the West is needed.

“Is the regime fragmented, is it fragile, is it bordering on the precipice? Yes, it is, but like anything else, if you throw them a lifeline, they’ll catch a second breath and survive a bit,” he said.

“We have an opportunity to put the final nail in the coffin. And we’re not asking the world to do that for us; the people of Iran want to do it, but they need some help,” he added.

Saeed Ghasseminejad, an Iran expert and a senior adviser at the Foundation for Defense of Democracies, told JNS that “since 2017, the political discourse in Iran has shifted from reform to revolution.”

Ebrahim Raisi was sworn in as the country’s new president on Thursday, marking a new development and potential impasse in the conundrum that is Iran. Raisi, who is sanctioned by the United States for his role in the mass execution of political prisoners in the late 1980s, will need to address the continuing unrest and collapsing economy as the result of U.S. sanctions implemented under the Trump administration.

At the same time, he also comes to power amid heightened tensions over the deadly drone attack on the Mercer Street oil tanker last week off the coast of Oman, as well as stalled talks in Vienna over the reinstitution of the 2015 nuclear deal with Western nations.

‘The regime has survived by using extreme violence’

Raz Zimmt, an Iran expert at the Institute for National Security Studies (INSS) at Tel Aviv University, said the current protests are not posing an imminent threat to the regime, which has so far refrained from using its full force to suppress them.

Most of the rallies, especially those outside Khuzestan province, said Zimmt, have been spotty. Moreover, their scale doesn’t come close to the large-scale protests that swept Iran from December 2017 to January 2018, and in November 2019.

Iranians marched down a main street last week in Tehran, protesting water shortages in the country’s southwest region, reported the AP. At least five people have been killed during the protests, according to state-run media.

Protesters in Mashhad are calling for the death of the regime while burning pictures of its members with some chanting slogans lauding the pre-Islamic Revolution monarchy.

In the last four years, continued Ghasseminejad, widespread protests have been accompanied by an unprecedented boycott of elections—the presidential election of 2021 and the parliamentary election of 2020—and the eruption of local demonstrations.

“The regime has so far survived by using extreme violence against peaceful protesters,” said Zimmt. “One can expect this round of protests will face the same fate, especially because its geographical distribution is narrower and its intensity lower than the one in 2019, when the regime killed at least 1,500 Iranians in less than a week.”

Ghasseminejad said the trajectory of events over the last few years shows that the anti-regime base is widening and the pro-regime base shrinking. “With the pseudo-reformist movement in limbo, the regime’s fate depends on whether it can satisfy its narrow base to continuously come to the streets to use violence against an increasing number of Iranians,” he assessed.

A critical input in this equation, he added, is whether the regime can resolve the sanctions issue “to access its blocked money and sell more oil to buy the loyalty of its base.”

‘Demonstrations indicate the intensity of despair among public’

The international community has a clear choice to make over the next few years, said Ghasseminejad, if it “wants to rescue this regime and extend its life by sending it billions of dollars, or push it towards the abyss imposing maximum pressure on the regime.”

Zimmt noted that the outbreak of “demonstrations indicate the intensity of despair among the public, which provides a fertile ground for the resumption of popular protests.” Further, he said, the exacerbating hardships increase frustration, alienation between citizens and the regime, as well as public distrust of state institutions.

“It is highly doubtful whether the elected president, Ebrahim Raisi, can deal with these problems and chronic mismanagement effectively because it would require far-reaching reforms,” said Zimmt.

And in the absence of economic improvement, he said, “the intensity of public despair is expected to increase, and the resumption of popular protest is only a matter of time.”