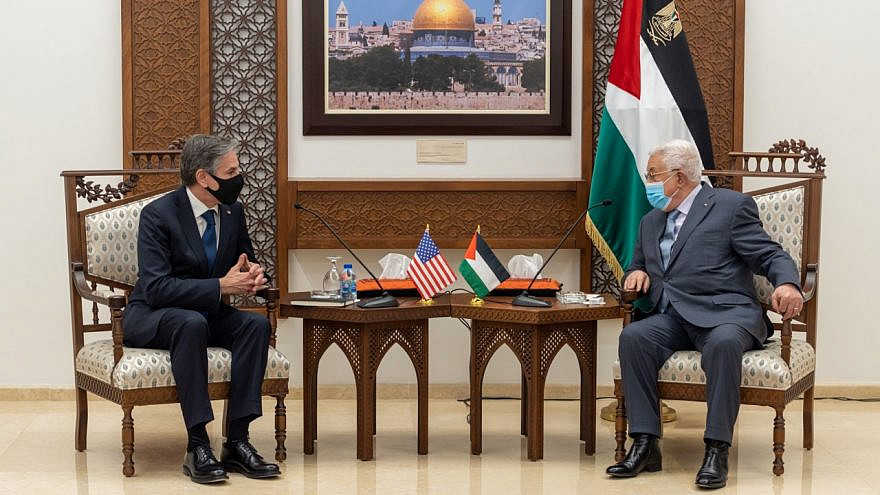 (June 8, 2021 / JNS) With the Biden administration promising to ramp up relations with the Palestinians, concern centers in Israel and pro-Israel circles over whether or not the carrot approach by the United States might induce continued bad behavior by the Palestinians while undermining Israeli accomplishments forged during the Trump administration.

During his recent visit to the region in late May, U.S. Secretary of State Antony Blinken told Palestinian Authority leader Mahmoud Abbas that America would reopen its Jerusalem consulate to the Palestinians and provided $360 million in support for the Palestinians.

Eugene Kontorovich, a scholar at the Kohelet Forum think tank in Israel and professor at George Mason University, told JNS that “the recognition of Jerusalem as Israel’s capital by the United States—and then by other nations as well—is one of Israel’s major diplomatic accomplishments of recent decades.”

“The opening of a consulate to the P.A. in Jerusalem is an attempt by the Biden administration to implicitly revoke that recognition,” he argued.

While Washington is involved with many pro-Palestinian policies, said Kontorovich, like restoring aid to the P.A., “Israel cannot do much about it, though it can and must prevent the opening of a consulate in Jerusalem.”

The only way that Israel should acquiesce, he said, is if America does it in a way that acknowledges Israel’s sovereignty.

The U.S. consulate in Jerusalem, which handled affairs between America and Palestinians, was merged with the U.S. embassy when it relocated to Jerusalem from Tel Aviv in May 2018. The Palestinian Affairs Unit now operates from within the embassy.

According to Palestinian Media Watch, Fatah Central committee member Hussein Al-Sheikh said that the Palestinians understood the U.S. move as an endorsement of the viewpoint that eastern Jerusalem is “occupied” by Israel.

The reopening of the consulate in eastern Jerusalem is “deemed the most important decision taken by the new U.S. administration” and “sends a clear message that [it] is part of the territories that Israel has [controlled] since 1967,” said Sheikh according to the P.A. news agency Wafa.

‘Can you please stop calling for jihad?’

Maurice Hirsch, director of legal strategies at Palestinian Media Watch, told JNS that the approach of the Biden administration should be to adopt policies that promote both peace and U.S. interests.

“The last 25 years have proven that certain policies, such as ever-growing aid and the existence of a separate U.S. consulate for the Palestinians, do not achieve these goals,” he said.

He also assessed that Palestinian incitement and delegitimization of Israel continues to influence the Palestinian people, making an agreement with Israel unlikely.

Instead, the Biden administration could have told the P.A.: “Listen. We will resume financial aid to the Palestinians, but before we do that, on Palestine TV, can you please stop calling for jihad?”

Analysts say that suppose Israel does not set red lines for the Biden administration’s increasing cooperation with the P.A. In that case, it risks losing sovereignty in Jerusalem and the ability to force the Palestinians to stop inciting violence and paying stipends to the families of terrorists.

Indeed, Mahmoud Abbas on Sunday ordered the family of Palestinian terrorist Muhannad Halabi, who murdered two Israelis in a stabbing attack in Jerusalem in 2015, to receive more than $40,000 in cash and be given new housing.

The payment was the first high-profile one since the Biden administration took office, despite some signals from the Palestinians that they might drop or alter payments to terrorists to gain favor with the United States.

As such, it remains unclear how the administration will continue to work to boost the P.A. while also complying with the 2018 Taylor Force Act, which suspended U.S. aid to the P.A. as long as it continues terror payments.

According to Hirsch, the U.S. administration’s pressure on Israel regarding the Palestinian issue signals its lack of support for the Jewish state and encourages continued Palestinian bad behavior.

“The Palestinians will rightly view the renewal of aid and the reopening of the consulate as a prize for the continued rejection of peace,” he said.