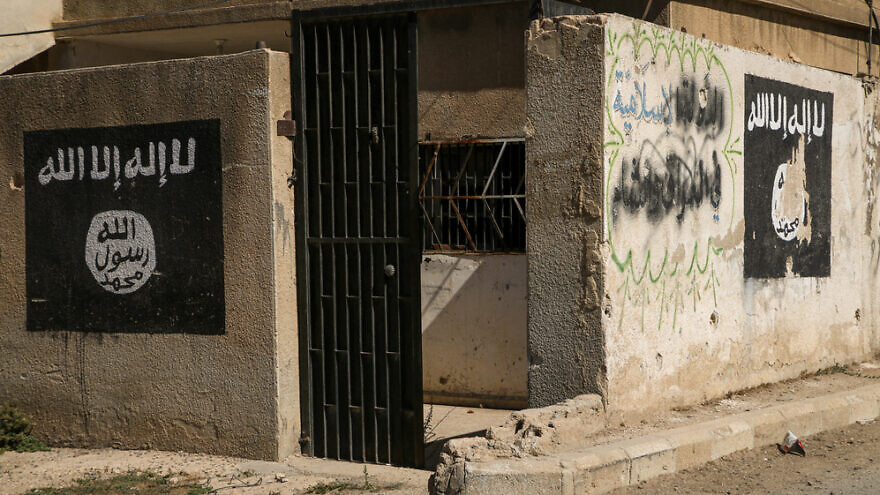 Col. (res.) David Hacham, a former Arab-affairs adviser to seven Israeli defense ministers, and a senior research associate at the Miryam Institute, said the terrorism threat posed by ISIS in Israel is usually made up of unorganized individuals or small cells that act “without infrastructure or operational coordination.”

“There are all sorts of individuals caught up with ISIS extremist ideology and who pursue them with full force, as we have seen in Beersheva and Hadera,” he said. “These are the actions of individuals, but which are still highly problematic to reach at the intelligence level.”

Four Israeli civilians were murdered in a combined car-ramming and knife attack in Beersheva, before the terrorist, a Bedouin-Israeli man from Houra, was shot dead by armed civilians on March 22. Two Israeli Border Police officers were murdered in Hadera on Sunday night after two terrorist gunmen from the northern Arab Israeli city of Umm el-Fahm—cousins who swore allegiance to ISIS and opened fire in Hadera before being shot dead by members of a Border Police unit who were nearby.

And on Tuesday, five people were killed in another terror attack in central Israel: first in Bnei Brak and then in Ramat Gan.

In the Hadera attack, terrorists used M-16 assault rifles, and were armed with additional handguns and an arsenal of ammunition—something Hacham said “reflects on the wide availability of weapons in the Arab Israeli sector. This availability of firearms is a central characteristic of what is taking place in the sector.”

In addition, video footage of the attack suggests that the terrorists had the opportunity to do some training with firearms, he assessed.

“Something here has become broken in terms of the operations of security forces against ISIS-affiliated suspects,” said Hacham. “Things cannot continue under the same pattern. New steps need to be taken. The first of these is the immediate return of administrative detention. If there are people with known ISIS tendencies, then that requires uncompromising action in a way not taken until now. Longer prison sentences are also needed. Even if that does not deter the terrorists, it can deter their families,” he stated.

The Shin Bet prevents between 500 to 600 terror attacks on average per year, and its disruption capabilities have greatly improved over the past two decades, noted Hacham. “Yet every time a successful attack occurs, this overshadows the public’s perception.”

The latest attacks are reminiscent of the wave of “lone wolf” Palestinian terror attacks that erupted in 2015, he argued, which, while unorganized, created a chain reaction of attacks, each one encouraging the next.

“This comes as the Negev Summit is underway—a reminder of how dangerous extremist forces can quickly disrupt processes,” he said.

The Israel Police, Shin Bet domestic intelligence agency and other security forces will need to be at the highest alert and readiness level going forward, said Hacham, as Ramadan and Land Day are around the corner, and the potential for a chain reaction of attacks hovers over the country.

The Israel Defense Forces decided on Monday to deploy four back-up infantry battalions to the West Bank, cutting short their training in order to beef up Israel’s security presence in sensitive hot spots, and prevent copycat attacks by ISIS operatives, according to Ynet.

Hacham said that in the West Bank, the sensitive calendar dates, such as the March 30 Land Day and Ramadan, could prompt incitement and violence, obligating added steps from the defense establishment. “Ramadan encourages further religious extremism,” he cautioned.

“High-quality intelligence is also needed to uncover those on the ground with aspirations of attack. A boosted security presence is also needed along the seam line where Palestinian workers cross, as well as in Israel itself,” said Hacham.

“There is no question that the Beersheva and Hadera attacks represent a watershed moment. Changes to the modus operandi, intelligence-gathering, levels of alert and deterrence, are all in order now. This includes more meticulous activation of [intelligence] sources and monitoring,” he added. “Every successful attack creates motivation for further attacks by so-called copycats.”

Hacham described Hamas’s practice of distributing candy in Gaza after every terror attack in Israel as predictable since each ones “serves Hamas’s agenda. It rides this wave, and continues its incitement; in this case, “remote-control” incitement from Gaza. Yet Hamas is not really part of developments here.”

While Hamas’s ideology promotes as many terror attacks on Israelis as possible, gaps exist between its ideology and that of ISIS. Hamas promotes a fusion of Palestinian nationalism and pan-Islamic aspirations, which translate into a two-staged plan. Hacham defined the first stage as envisaging the establishment of an Islamic-Palestinian state on Israel’s ruins, and the second as establishing a pan-Islamic caliphate similar to the one “existing in the seventh and eight centuries.”

ISIS, in contrast, calls for the establishment of an immediate caliphate and has no place for “geographic patriotism,” noted Hacham. “Hamas did not tolerate challenges from ISIS in Gaza in the past. Now though, there is a common basis when it comes to attacks in Israel—harming Israeli Jews.”

Meanwhile, Hamas is reportedly refraining from launching terrorist military attacks from the Gaza Strip, including rockets or border fence disturbances.

To a great extent, this is due to the fact that the terror organization that rules the coastal enclave is still “licking its wounds” from last May’s 11-day conflict it fought with Israel, when it sustained major damage to its infrastructure, assessed Hacham, explaining that “Hamas is interested in fully recovering its operational capabilities. In addition, the civilian infrastructure is far from recovered in Gaza. Tens of thousands of homes sustained damage over recent conflicts, some partially destroyed and some fully.”

He noted that Qatari assistance funds to the tune of $30 million per month, coupled with ongoing Egyptian infrastructure repair work on coastal roads in Gaza and the building of new neighborhoods in the north of the Strip, are also interests that Hamas wants to preserve at this time.