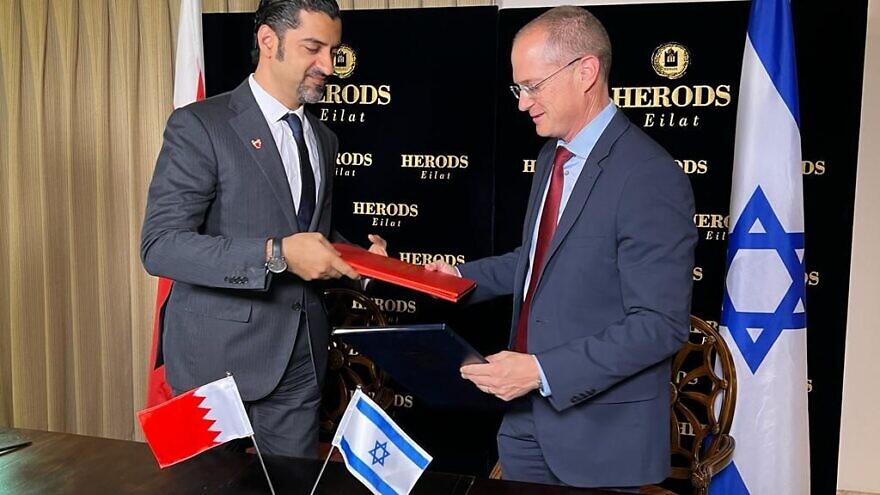 (October 20, 2022 / JNS) Israel and Bahrain on Wednesday signed an agricultural cooperation declaration on the sidelines of the first-ever International Summit on Food Technologies from the Dead Sea and Desert that took place in Eilat.

The conference, an initiative of Israel’s Ministry of Agriculture and Rural Development, was attended by some 70 senior officials, who focused on promoting coordination and innovation in aquaculture, in particular, and the overall battle to combat food security.

The declaration calls for the promotion and expansion of cooperation between Jerusalem and Manama in the fields of agriculture, livestock and food security, and the sharing of related knowledge, technology and diverse products.

“The signing of the agreement with the Minister of Agriculture of Bahrain, at the conference attended by ministers from around the world and senior delegations from Morocco, Jordan and the United Arab Emirates, constitutes an important step towards promoting cooperation which will see Israel become a center for research and development of food from the sea and the desert,” Israeli Minister of Agriculture and Rural Development Oded Forer said.

Representatives at the conference also came from countries such as the United States, Chile, Ghana, Singapore, Romania, Malta, the Netherlands and Iceland.

It followed a recent decision by Forer to launch a multi-year plan to develop Eilat and the surrounding southern region at a cost of approximately $50 million.