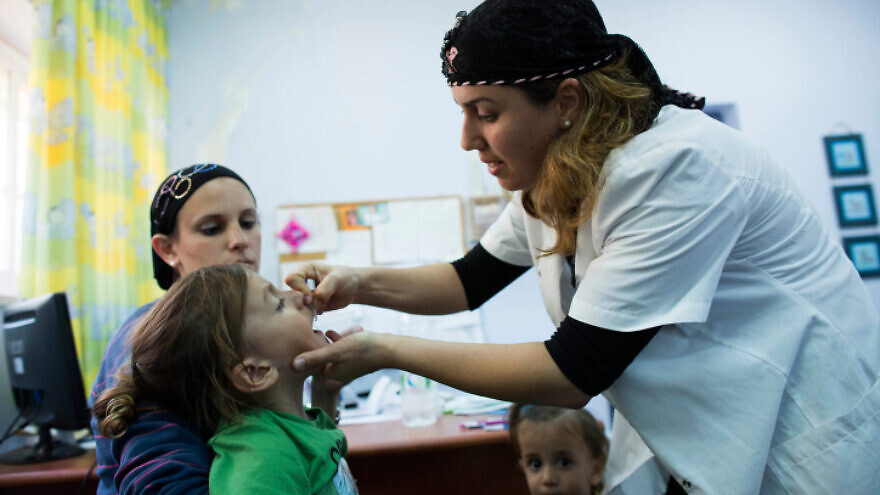 (April 5, 2022 / Israel Hayom) Israel’s Health Ministry is preparing to start a polio vaccination campaign, under the auspices of which nearly all children in Israel ages 9 to 17 will be called in to complete their vaccinations. The ministry expects the drive to include some 2 million children and pose the same difficulties as the campaign to vaccinate children against COVID-19.

In the past few weeks, Jerusalem district health officials have been reaching out to ensure that children in Jerusalem are vaccinated after the virus, which primarily affects kids, was identified in the country for the first time since 1989.

On Monday, Dr. Sharon Elroi-Preiss, head of public health services at the Health Ministry, held a webinar for pediatricians and Israel’s health-care providers to educate them about the upcoming vaccination drive.

One of the challenges with which the ministry will have to cope will be persuading parents to bring children to community clinics and well-baby centers, after only some 25% of children ages 5 to 11 were vaccinated against COVID-19. The ministry is concerned about “vaccine fatigue” among the general public, as well as among medical workers.

Another tricky point is that the ministry wants every child to receive the exact number of polio vaccines he or she is missing. Since children born in different years were vaccinated according to different protocols, each child’s records will have to be checked so medical staff can administer the correct vaccine dose or doses.

In addition, polio vaccines are administered at well-baby clinics, community clinics or HMOs; no single, centralized database is available.

The ministry has published its criteria for follow-up polio shots. Children ages 9 to 17 (born from 2005 to 2013) who have only received a single vaccine dose will be summoned for at least one additional dose. Current assessments are that 90% of children in this age group will need additional shots. Children aged 8 and under (born in or after 2014) who have not yet received two doses of the live attenuated vaccine (LAV) will also need to be vaccinated.

The LAV is administered only to children who have received at least two doses of inactivated vaccine.

Israel’s current polio-vaccine protocol includes four doses of inactivated vaccine, administered by injection, in the child’s first year, as well as a booster for second-graders and two additional shots at well-baby clinics. Two doses of inactivated vaccine provide 90% protection against the paralysis that polio can cause, and children who have received all their vaccines are considered fully protected against symptomatic polio. Children who have not received the LAV can still carry and transmit the virus.

“In the vaccine completion program, we’re looking at exactly which doses need to be completed for each child. Every year group is different, and there is a need to vaccinate over 2.5 million kids,” said Dr. Lior Hecht-Sagi of the Health Ministry’s Public Health Headquarters.

Meanwhile, a ministry representative told the Knesset Channel on Monday that nearly 100% of children in the ultra-Orthodox enclave of Mea Shearim in Jerusalem had been vaccinated against polio.