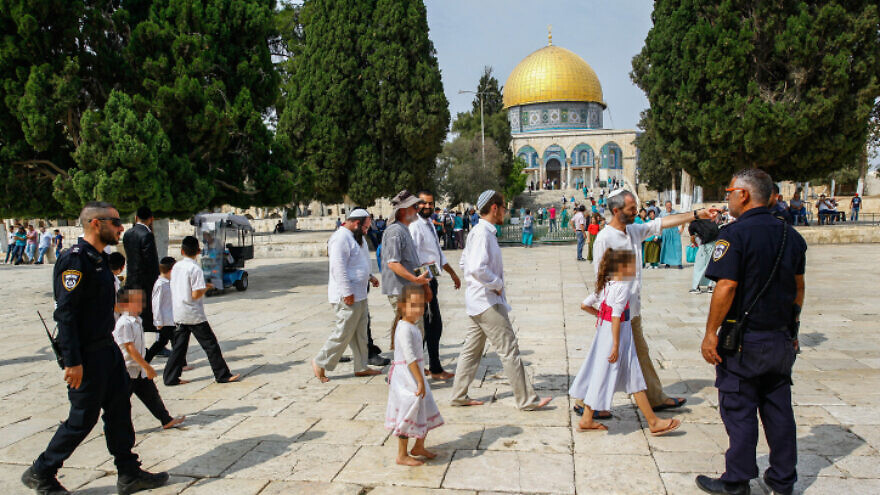 (May 23, 2022 / JNS) A Jerusalem Magistrate’s Court decision on the conduct of Jewish minors on the Temple Mount does not include a broader determination on freedom of worship at the site, the Israeli government said in a statement on Monday.

The unusual clarification came after the court ruled, earlier in the day, in favor of three Jewish youths who had been temporarily barred from the Temple Mount after bowing and reciting the “Shema Yisrael” prayer there.

According to the so-called status quo on the Temple Mount, formulated by Israeli Defense Minister Moshe Dayan in 1967, Jews may visit but not pray at the site, which is administered by the Waqf, a branch of Jordan’s Ministry of Awqaf Islamic Affairs and Holy Places.

Despite Monday’s ruling, the Israeli government stressed that “There is no change, nor is any change planned, to the status quo of the Temple Mount.”

The court’s decision focused “exclusively” on the individual case before it, and made no broader determination regarding freedom of worship on the Temple Mount, the statement said.

“With regard to the specific criminal case in question, the government was informed that the state will file an appeal to the District Court,” it added.

Right-wing organizations quickly adopted the ruling, claiming it was an unprecedented legal decision, according to Ma’ariv, despite statements by the magistrate himself clarifying that his ruling only touched on this particular case.

“I cannot sign my ruling without clarifying that it does not constitute intervention in the police’s work in enforcing public order in the Temple Mount in general, and that there is no ruling on freedom of worship at the Temple Mount,” said Judge Aryeh Romanov.

The Jordanian Foreign Ministry condemned the ruling, calling it a “null decision that lacks legal validity according to international law, which does not recognize Israel legal control over the occupied Palestinian territories from 1967, including in east Jerusalem,” Israel Hayom reported.