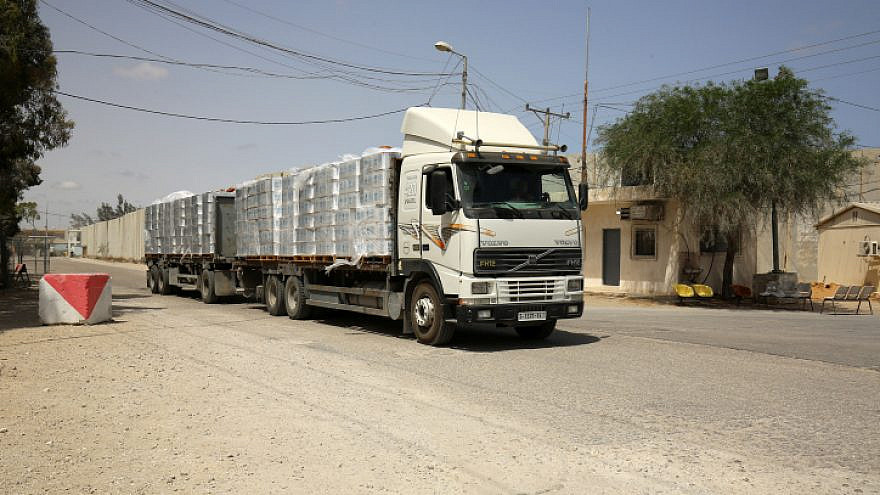 (May 25, 2021 / Israel Hayom) Israeli Defense Minister Benny Gantz has issued instructions to resume shipments of humanitarian goods into the Gaza Strip for the first time since “Operation Guardian of the Walls” ended in an Egyptian-brokered ceasefire that took effect at 2 a.m. on Friday.

The supplies, slated to enter through the Kerem Shalom border crossing on Tuesday morning in coordination with political officials, include food, medical equipment, medicine and fuel for private use.

As of late Monday, no exports would be allowed out of Gaza into Israel.

Also starting Tuesday, the Erez Border Crossing was to open to allow Gazans requiring lifesaving medical treatment, international NGO workers and foreign journalists to move back and forth between Gaza and Israel.

The government also decided to allow fishing off the coast of Gaza up to a distance of six nautical miles starting at 6 a.m. on Tuesday.

Israeli officials stressed that the decisions were conditional on continued calm and stability from Gaza. Earlier Monday, a high-ranking official in the U.S. State Department said the United States would ensure that the goods transferred to Gaza were used to rebuild the region and did not fall into the hands of Hamas.

In a phone conversation, the official said that the United States would use U.N. personnel “already on the ground in Gaza” to distribute humanitarian aid donated by foreign nations, “in conjunction with the Palestinian Authority.”

The official said he believed that Egypt would also play a part in distributing humanitarian donations.

The U.S. representative did not have a coherent answer about how, exactly, Hamas could be prevented from hijacking the supplies earmarked for the civilian population, as the organization has total control over the Gaza Strip and what occurs there.

“Everything has been done to ensure that the aid goes to the people of Gaza who need it more than anyone,” he said, nevertheless adding that there were “no guarantees.”

He also said that though Hamas has “veto power,” the U.S. believes that cooperation with U.N. personnel will “make things happen.”

“We aren’t talking with Hamas,” he added.

Simcha Goldin, father of the late Israeli Lt. Hadar Goldin—who was killed in “Operation Protective Edge” in Gaza in 2014 and whose remains, along with those of the late Staff Sgt. Oron Shaul, are being held by Hamas, as are Israeli captives Avera Mengistu and Hisham al-Sayed—attacked the government’s decision.

“The Israeli leadership has simply lost its moral compass and its ability to distinguish between good and evil. They send supplies to a terrorist organization while it is brutalizing the citizens of Israel and keeping IDF soldiers who set out to fight for and defend their homeland. This is a total loss of values.”

Goldin called on Gantz and Israel Defense Forces Chief of Staff Lt. Gen. Aviv Kochavi to “wake up immediately and recalculate. The people of Israel won’t let this abandonment pass quietly. Bring the soldiers back to Israel immediately.”