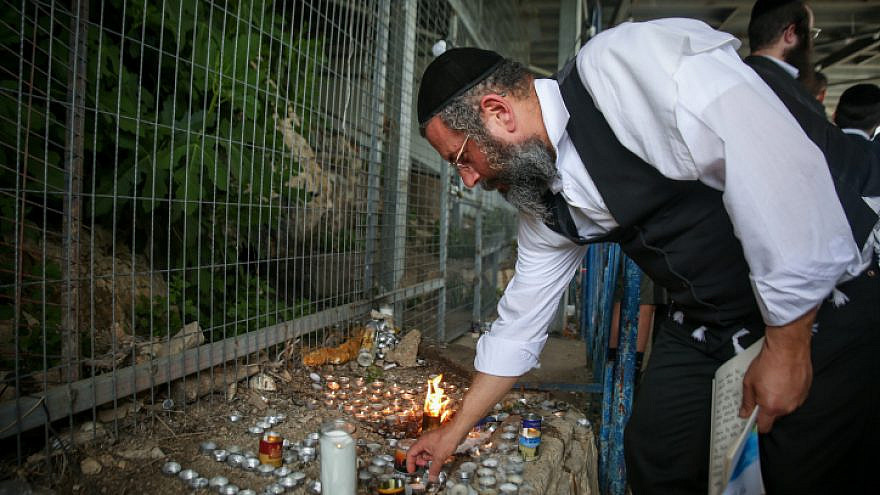 An Orthodox Jewish man visits Mount Meron in northern Israel, where 45 Israelis lost their lives during a stampede at a Lag B'Omer celebration, May 3, 2021. Photo by David Cohen/Flash90.
Spread the word.
Help JNS grow!
Share now:

(May 4, 2021 / Israel Hayom) Israeli Attorney General Avichai Mandelblit said on Monday that there is no legal impediment to establishing a state commission of inquiry into the Lag B’Omer disaster, not even in the case of a provisional government.

“Although the decision to form such a commission by a provisional government has certain complications, under these difficult circumstances, these complications do not create a legal impediment,” he said.

Mandelblit submitted the opinion in response to a question by Justice Minister Benny Gantz regarding the feasibility of such a probe.

According to Mandelblit, the complexity of the incident, the chain of decision-makers and the mismanagement of the sacred site over multiple years are beyond the scope of the Israel Police to investigate. Therefore, he said, establishing a single body responsible for the thorough investigation of all parties involved in the matter is justified.

Also on Monday, Israel Police Commissioner Yaakov Shabtai convened a senior command meeting at the Northern District Headquarters in Nazareth. He would not let the police “become anybody’s scapegoat for the continued misconduct of many different bodies,” he said.

Over the weekend, police officers across the country changed their profile pictures to that of Northern District Commander Maj. Gen. Shimon Lavie, in support of the commander who oversaw the security arrangements for the Lag B’Omer celebrations and took responsibility for the disaster on Friday.

Those who expressed their support “are police officers who used to be under his command,” according to one officer. “I too used to be his subordinate and I can testify that he is a wonderful person, humane, moral and exceptional in his qualities.”

Lavie’s associates do not expect him to resign.

“Is the police to blame? Who built the ramp? It is not even something the police does,” one of them said. “The sacred site receives millions of shekels in donations. Where did all the money go?”

Meanwhile, the Knesset held a special session Monday devoted to the incident.

“It is our fundamental duty to examine every aspect of the Meron disaster,” said Israeli Prime Minister Benjamin Netanyahu. “After the period of mourning is over, we will examine in an orderly, thorough and responsible fashion every matter that is connected to gatherings on the mountain in the present and past.”

Netanyahu said the investigation would include “arrival, security, entry, exit, the allocation of time and security forces and, above all, the engineering changes that are required at the site, and the issue of expropriation, management and responsibility.”

At the meeting, Interior Minister Aryeh Deri said the terrible disaster was fated, but that “does not exempt us from scrutiny and self-examination.”