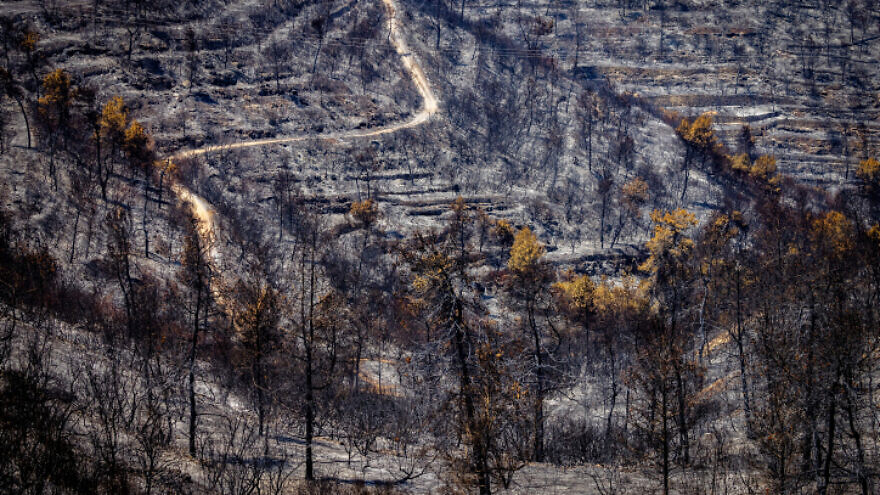 The aftermath of major fire which broke out in the Jerusalem area on Aug. 16, 2021. Photo by Olivier Fitoussi/Flash90.
Spread the word.
Help JNS grow!
Share now:

(August 30, 2021 / JNS) The Israeli Cabinet on Monday approved a 70 million shekel ($21 million) rehabilitation plan to deal with the damage caused by the wildfires that devastated the Jerusalem hills two weeks ago.

The lion’s share (60 million shekels, or $18 million) will go to ecological rehabilitation, according to a statement from the Prime Minister’s Office. The Environmental Protection Ministry has been tasked with formulating an action plan for the rehabilitation within 60 days.

In addition, 5 million shekels ($1.5 million) will be allocated to the regional council for expenditures incurred in clearing asbestos debris as a result of the fire.

Another 2.6 million shekels ($807,000) will go to immediate emergency expenses such as lodging for residents who were evacuated from their homes, and 400,000 shekels ($124,000) will be earmarked for social services.

The fires led to the evacuation of the communities of Beit Meir, Shoresh, Shoeva, Kisalon, Givat Yearim, Ramat Raziel, Tzuba and the facility at Eitanim, and caused extensive damage in the area, especially to buildings and infrastructures.

The fires also burned thousands of acres of forest and natural growth, damaged springs and nature and heritage sites, trails and nature reserves, and killed many animals.