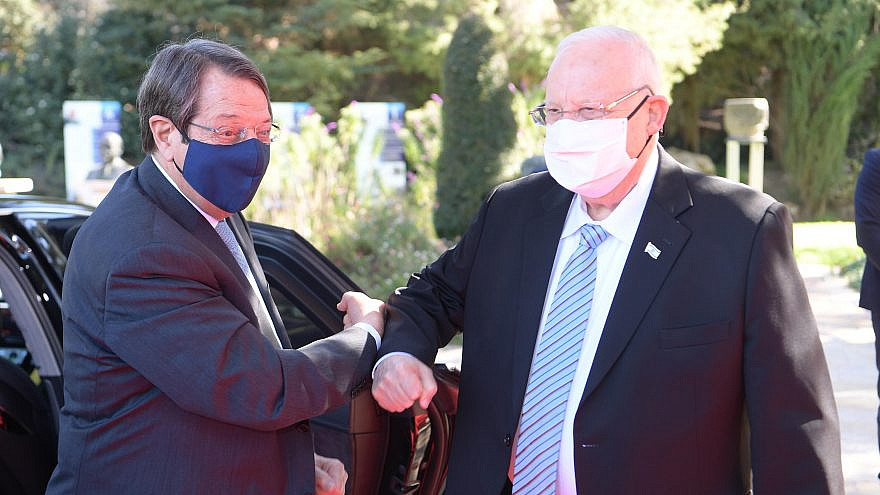 (February 14, 2021 / JNS) Israeli President Reuven Rivlin met on Sunday with Cyprus President Nicos Anastasiades at the President’s Residence in Jerusalem. The two leaders discussed plans for a “green pass” that would allow the resumption of flights between the two countries, as well as economic cooperation, especially in the energy sector.

“As the coronavirus has shown us, today’s challenges know no borders, and we must work together in order to meet them,” said Rivlin. “In this context, let me say how pleased I am with the recent understandings that will allow the renewal of flights between Israel and Cyprus and call on more countries to adopt the ‘green pass.’ ”

Rivlin went on to say that in addition to the warm bilateral relations between the two countries, their strategic trilateral cooperation with Greece, particularly in the energy sector, was a “key component of regional stability and economic development.”

“We must continue to work together and not let anyone undermine our regional stability,” he said. “Iran and its terrorist proxies, like Hezbollah, threaten the security not only of Israel but of all countries in the region, and we must join together to counter these threats.”

Cyprus President Anastasiades thanked Rivlin for his remarks, saying that with the world in upheaval due to the coronavirus crisis, “the warm relations between our two countries are more important than ever.”

“I would like to express my deep appreciation for Israel’s support of Cyprus at this difficult time,” he added.

The relationship between the two countries was not just between governments, but also between peoples, said Anastasiades.

“We have an ambitious plan of action for cooperation between our countries, and between our diasporas. I would be very happy to welcome you to my country as soon as possible, before the end of your term of office,” he told the Israeli president.

Rivlin thanked Anastasiades for his country’s support of Israel in the international arena and turned to the decision of the International Criminal Court on Friday that it may investigate Israel for alleged war crimes.

“We still see how some international institutions are being hijacked for political purposes. Today, the Palestinians are using the International Criminal Court, which was established to deal with the world’s worst crimes, as a political weapon against the State of Israel,” he said.

“I would like to take this opportunity to call on all states to reject these efforts to involve the ICC in a political conflict,” he added.