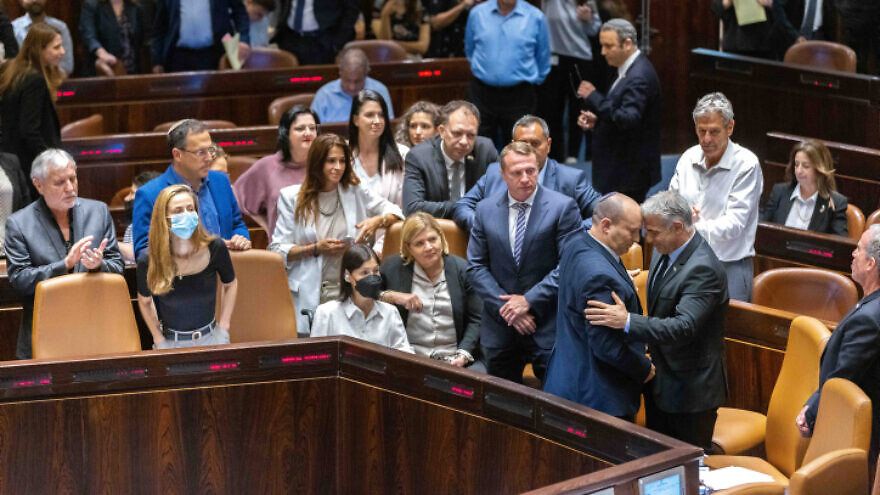 A discussion and vote on a bill to dissolve the Knesset, at the Knesset assembly hall, June 30, 2022. Photo by Olivier Fitoussi/Flash90.
Spread the word.
Help JNS grow!
Share now:

The Joint Arab List voted with the coalition, resulting in a majority of 57 votes in favor of a Nov. 1 election date. Forty-seven Knesset members voted against the November date.

The opposition had been pushing for the election to be held on Oct. 25, when yeshivah students, who are likely to vote for ultra-Orthodox parties that will seek to join Likud in a political bloc, will be on holiday.

The Knesset approved in third and final reading a bill to disperse itself on Thursday, which means that Yair Lapid is set to become caretaker prime minister at midnight on Friday. He will replace current Israeli Prime Minister Naftali Bennett.

Bennett, who announced on Wednesday that he will not run in the election, will become alternate prime minister after Yair Lapid becomes the premier.

“The State of Israel is the love of my life. Serving it is my calling,” Bennett said in a televised farewell speech.

Ayelet Shaked, Bennett’s long-time political partner, will replace him as the head of the Yamina Party. Shaked has said she would be open to joining Likud leader Benjamin Netanyahu in forming a right-wing government.