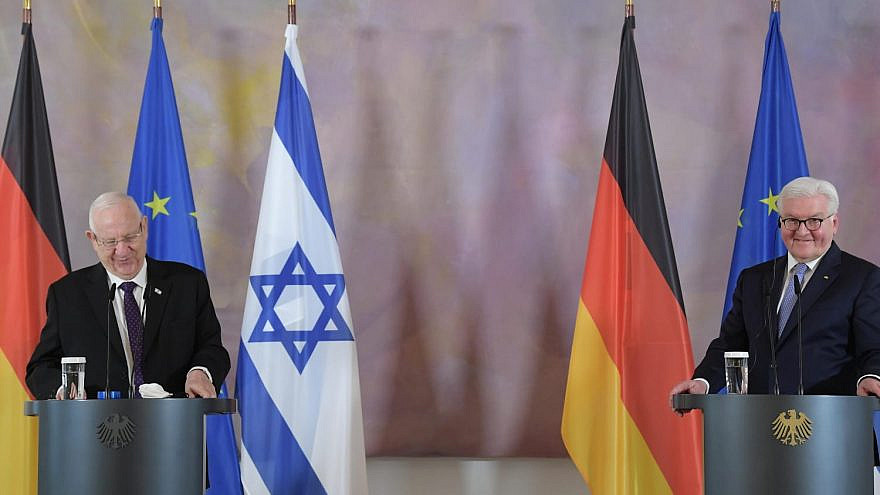 (March 17, 2021 / JNS) Israeli President Reuven Rivlin landed in Berlin on Tuesday, kicking off a diplomatic tour of Europe at the invitation of the presidents of Germany, Austria and France.

Rivlin, who was accompanied by Israel Defense Forces Chief of Staff Lt. Gen. Aviv Kochavi, is set to hold a series of meetings with European leaders on Hezbollah’s rising power, the Iranian nuclear project and the International Criminal Court.

During the first such meeting, with German President Frank-Walter Steinmeier, Rivlin called the ICC chief prosecutor’s March 3 decision to investigate Israel for war crimes scandalous and thanked Germany for its stance against the ruling.

German Foreign Minister Heiko Maas stated on Feb. 9 that in Germany’s view, the ICC lacked jurisdiction to investigate alleged crimes in the Palestinian territories, due to the fact that there is no Palestinian state.

“We are proud of our soldiers, our sons and daughters, grandsons and granddaughters. They protect us from our enemies and we will protect them from this decision. The State of Israel will not accept claims against the implementation of her right and duty to protect her citizens,” said Rivlin on Tuesday.

Palestinian attempts to “legalize” the conflict will only perpetuate it, he added, referring to the fact that the ICC decision came in response to an appeal by the Palestinian Authority.

“We cannot expect that confidence-building measures and improvement in our relations [will occur] when one side is advocating criminal investigations of the other side’s civilians in a foreign court,” he said.

The IDF chief of staff said that the ICC ruling represents a significant challenge to democratic states’ ability to engage terrorist forces that hide behind civilian populations.

“The fundamental difference between us and our enemies is that while we do everything we can to prevent harming innocent civilians, our enemies do everything they can to harm our civilians, who are entirely innocent. We are in a new era of warfare, which is highly complex, and the ICC must adapt itself to the new reality,” said Kochavi.

“Your soldiers could face the same problems in other parts of the world, and so your support now is very important for us,” he added.

Kochavi gave a briefing at the meeting on a number of security issues, particularly Iran and Lebanon, and elaborated on the failings of the 2015 Joint Comprehensive Plan of Action nuclear agreement with Iran.

In a statement to the press after the meeting, Rivlin said, “This is a time when there is a potential for a change in the balance of power in our region. The Abraham Accords with the United Arab Emirates and other Arab nations open a window of hope for moderate voices in the region. It is now that extremist forces, led by Iran, are threatening to undermine this stability. The international community must stand together, speaking out strongly and without compromise against Iran’s nuclear plan and its support for terrorist groups that threaten Israel and the stability of the region.”

He also addressed the subject of the Israeli prisoners and missing soldiers held by Hamas in Gaza, and Germany’s role in efforts to secure their return.

“I would like to thank Germany’s leaders for their efforts to bring [them] back. … We will continue everything we can to bring our boys home,” he said.

Rivlin concluded his remarks by thanking his German counterpart for their many years of friendship, which he said were “a testament to the warm relations between our two peoples that have developed over the past years.”

Steinmeier noted that Rivlin’s last visit to Berlin had been a little over a year ago, before the COVID-19 pandemic.

“Since our last conversations, many things have changed,” he said.

“During our conversation today, we have shared our experiences from our own countries, about the course of the virus. I congratulated President Rivlin on Israel’s vaccination drive that has been seen here in Germany with great appreciation and respect, not only because of its speed but also because of the efficiency of the process. Others, ourselves included, can learn a great deal from it,” he said.

The German president called the Abraham Accords, brokered by former U.S. President Donald Trump, “nothing less than historic.” However, he added, “The previous American administration’s policy did not, we believe, support positive developments, and we hope that we can bring about change in the future with the new administration and our European neighbors.”

Steinmeier reiterated Germany’s support for the two-state solution, which he said “will serve the interests of both sides and will allow them to live in peace and democracy.”