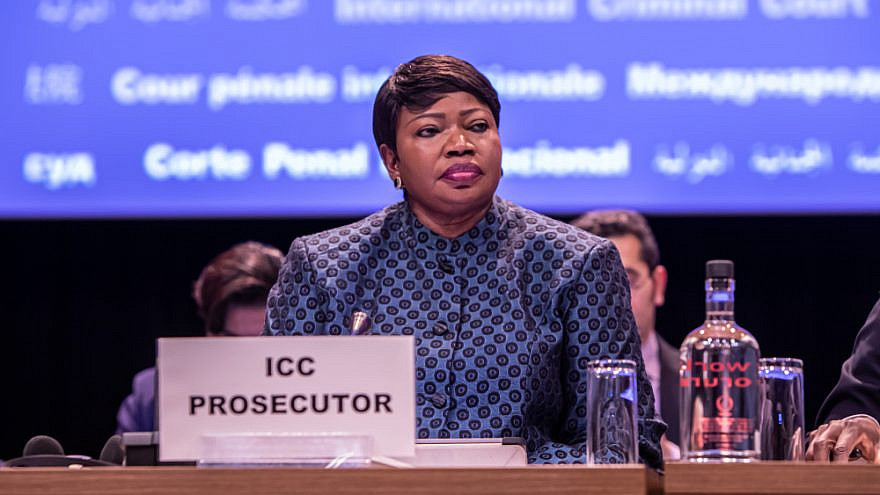 (March 3, 2021 / JNS) The chief prosecutor of the International Criminal Court in the Hague announced on Wednesday her intention to open an investigation into war crimes allegedly committed by Israelis and Palestinians since 2014.

The announcement was strongly denounced by Israel, but welcomed by the Palestinian Authority, which had requested the probe. It comes less than a month after the ICC ruled that it had jurisdiction to open an investigation.

“The investigation will cover crimes within the jurisdiction of the court that are alleged to have been committed in the situation since 13 June 2014, the date to which reference is made in the referral of the situation to my office,” said Chief Prosecutor Fatou Bensouda in a statement. “Any investigation undertaken by the office will be conducted independently, impartially and objectively, without fear or favor.”

By choosing June 13, 2014, as the start date for the investigation, it will not look into the murder of three Israeli Jewish teenagers—Eyal Yifrach, Gilad Shaar and Naftali Frenkel—that happened the day before.

“The decision to open an investigation followed a painstaking preliminary examination undertaken by my office that lasted close to five years,” wrote Bensouda. “During that period, and in accordance with our normal practice, the office engaged with a wide array of stakeholders, including in regular and productive meetings with representatives of the Governments of Palestine and Israel, respectively.”

“We have no agenda other than to meet our statutory duties under the Rome Statute with professional integrity,” she added.

“We will not accept claims against the exercise of our right and our obligation to defend our citizens. The State of Israel is a strong, Jewish and democratic state that knows how to defend itself and to investigate itself when necessary,” he said in a statement.

However, the P.A. praised the decision, saying that it would be ready to provide “any assistance required … to realize justice for the Palestinian people.”

“This long-awaited step serves Palestine’s tireless endeavor to achieve justice and accountability, which are indispensable foundations for the peace that the Palestinian people demand and deserve,” said the P.A. Foreign Ministry.

Hamas also welcomed the decision by the ICC; however, the Palestinian terror group is also directly implicated in the war crimes the court is investigating. Hamas has said that the terror group’s actions are “legitimate resistance.”

Orde Kittrie, senior fellow at the Foundation for Defense of Democracies, told JNS that the decision is “politically driven.”

“It is contrary to international law, the ICC’s legal mandate and the institutional interests of the International Criminal Court,” he said.

Kittrie argued that the ICC has no jurisdiction in this case and that it has been backed up by several countries around the world.

“Bensouda has claimed ICC jurisdiction over alleged Israeli war crimes because they occurred in the Palestinian Authority, which has purported to join the ICC as a state. However, Palestine’s status as a state for ICC purposes has been refuted by numerous submissions to the ICC, including by the Obama administration’s point persons for ICC issues and by several European and other governments, including those of Australia, Canada, the Czech Republic and Germany.”

While Israel and several world powers—the United States, Russia, China and India—are not members of the ICC, any decisions by the court could make life difficult for Israeli officials and military leaders.

Although the ICC doesn’t try states, it can target individuals with international arrest warrants. Israel is concerned that its officials and military officers could face arrest warrants, while also providing a boost to the BDS campaign against the Jewish state.

Professor Eugene Kontorovich, director of International Law at the Jerusalem-based Kohelet Policy Forum, told JNS that the investigation highlights how the ICC has become a politicized tool to attack Israel.

“The decision has no basis in law or precedent; rather, the ICC has become just another anti-Israel international organization. But it is important to remember that the Palestinian Authority brought this about, in contradiction of all their commitments under Oslo. Israel cannot be expected by the Biden Administration to negotiate with the P.A. while under an investigation instigated by the P.A.,” he said.

Indeed, the ICC investigation may force the Biden administration to get more involved in the Israeli-Palestinian conflict at a time when it is dealing with other more pressing foreign and domestic concerns.

Last year, the Trump administration imposed sanctions on top officials in the ICC, including Bensouda and Phakiso Mochochoko, head of the court’s Jurisdiction, Complementarity and Cooperation Division. These sanctions, which were over the court’s attempts to prosecute U.S. soldiers in Afghanistan, included revoking visas of ICC officials.

The U.S. State Department said last month that it had “serious concerns” over the ICC’s ruling on its jurisdiction to investigate Israel and that it represented a biased attack on the Jewish state. More recently, a bipartisan group of senators urged U.S. Secretary of State Tony Blinken to more strongly denounce the ICC’s investigation.

The investigation comes as Bensouda’s term nears its end. U.K. prosecutor Karim Khan is set to take over in June and could decide to end the probe.

“Bensouda’s aggressive move against Israel is also surprising from an institutional perspective. It comes just three weeks after Karim Khan, a respected British attorney, was elected to replace Bensouda when her term expires on June 15. Khan defeated Fergal Gaynor, an Irish attorney who has long been the leading outside advocate of the ICC investigations of the United States and Israel. Bensouda appears to be trying to box in her successor,” explained Kittrie.

Kittrie said that it appears that Bensouda—who has faced criticism from an independent investigation last year over her leadership of the ICC, including allegations of bullying and sexual harassment under her watch—may be trying to prevent herself from facing legal jeopardy. “Bensouda appears to be taking these inappropriate steps on her way out the door in an effort to distract from her mismanagement of the ICC and perhaps try to insulate herself from legal jeopardy by appealing to anti-U.S. sentiments,” he said.

Kittrie said she is going “beyond the ICC’s mandate to pursue the United States and Israel, non-members of the ICC, for how they defend themselves against terrorism while leading her own senior staff to believe they are immune from any consequences for sexual harassment.”