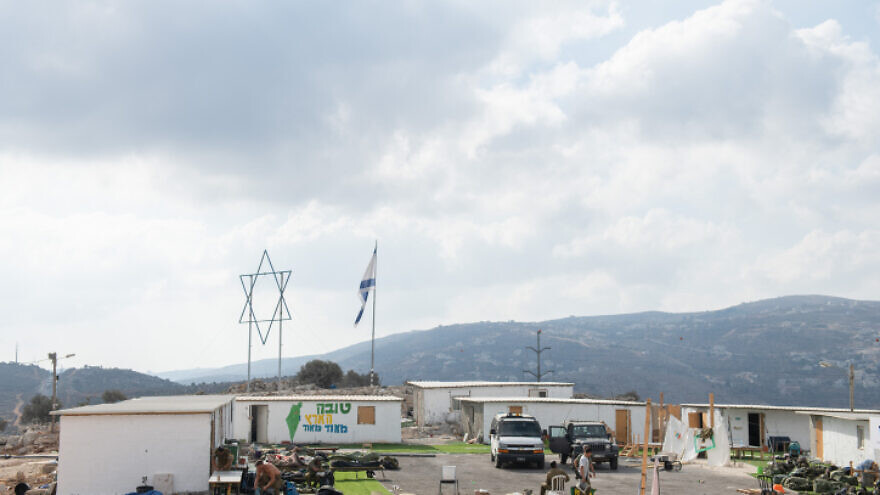 Israeli military in the outpost of Evyatar in Judea and Samaria, on July 5, 2021. Photo by Flash90.
Republish this article
1079 WORDS
Spread the word.
Help JNS grow!
Share now:

(February 14, 2022 / JNS) Evyatar, the unauthorized settlement outpost that was voluntarily evacuated in July as part of a deal with Israel’s fledgling government, is back in the news. It returned to the headlines on Feb. 1 when Israel’s Attorney General Avichai Mandelblit, on his last day in office, gave the legal stamp of approval to the deal, touching an ideological nerve within the coalition and raising the question whether Evyatar will become a wedge splitting its left and right blocs.

As to be expected, the Meretz Party, on the far-left of the government, issued the harshest condemnation, likening the settlement to a criminal project. “If I can overthrow Evyatar—I will, even if it means overthrowing the government,” said Meretz Knesset member Moshe Raz on Feb 2. Two days later, his party lodged a formal complaint with Israeli Prime Minister Naftali Bennett and Foreign Minister Yair Lapid.

Lapid sided with Meretz, sending his own letter to Bennett. In a meeting of his Yesh Atid Party on Feb. 7, he told the press, “This agreement was not made with me. I represent half of the government and therefore it is not valid in my eyes, and I oppose it.”

As Evyatar advances, some question if it will cause the government to weaken.

“Evyatar has become a symbolic hot potato,” said Yechiel Leiter, a senior fellow at the Kohelet Policy Forum, a Jerusalem-based think tank. He told JNS that Lapid, by raising its importance, forces the right-wing of the coalition to do likewise.

“Substantively, it’s not that big an issue. We’re not talking about a big defensive settlement, but in politics, symbols often are more important than substance,” he told JNS.

Maj. Gen. (res.) Gershon Hacohen of the Begin-Sadat Center for Strategic Studies at Bar-Ilan University was more vehement, telling JNS: “If Evyatar is not established, there will be a big protest, and in the end, the government will be overthrown, and Bennet will be erased from the political map.”

‘We have an agreement’

Evyatar comprises about 14 acres, currently empty of civilians and housing a small IDF contingent guarding the civilian structures, part of the deal reached in July. That deal came as a relief for the government at the time, diffusing a potentially explosive situation just as the coalition was finding its legs, having been sworn in a little more than two weeks beforehand.

The agreement called for those living in the unauthorized settlement to vacate quietly. They did so on the condition that if the area in which they had settled turned out to be state land—to be determined by a land survey—then a yeshivah would be established there.

The government also agreed to a “permanent civilian presence,” the exact nature of which would be determined later. Statements from settlement leaders at the time make clear they took this to mean a new settlement would be established.

As Evyatar has passed more hurdles, the tension within the government has risen. Lapid, in his letter to Bennett, warned that proceeding with Evyatar would have “serious policy consequences and damage foreign relations, first and foremost with the U.S.”

Leiter argued that the domestic damage that would result from breaking the deal between the government and the settlers would outweigh foreign-policy risks. “What example is Foreign Minister Lapid setting for the rest of the country? Here we have an agreement. It was signed, sealed and delivered with the government that he represents. … How are people supposed to relate to promises that the government makes?” he asked.

‘Settlers are part of the system of holding the area’

Evyatar, the unauthorized version, was established with dizzying speed in May of last year, a reaction to two events in that month—the Gaza conflict in which Hamas launched more than 4,000 rockets at Israeli civilian centers in the course of 11 days, and the terrorist killing of Yehuda Guetta. Guetta, who later died of his wounds, was shot at the Tapuach Junction, about a mile east of the site of Evyatar, which is named after another terrorist victim, Evyatar Borovsky, killed at the same junction in a stabbing attack in 2013.

Hacohen, speaking from a military perspective, said Lapid doesn’t understand the strategic importance of Evyatar. “It sits on the main axis that connects the Rosh Ha’ayin coastline to the Jordan Valley. [Former Prime Minister Yitzhak] Rabin insisted that this axis be ours,” he noted.

Moreover, he said Lapid fails to grasp the role of civilians in the territories. “Israel can’t defend itself without those civilians in Judea and Samaria, and the Jordan Valley,” he said. “The Israel Defense Forces needs settlers. The whole concept of Zionism was that the settlers were the ones who held the wider area.”

“The IDF doesn’t have more than 10,000 soldiers there. It can’t keep more than that. The IDF has other things it needs to do. What gives the IDF the ability to carry this great burden are the settlers. The settlers are part of the system of holding the area,” he said.

Leiter expressed optimism that Evyatar would be established. “I don’t think they could possibly backtrack, particularly now with Mandelblit’s approval,” he said, noting also that Israel’s Minister of Interior Ayelet Shaked is determined to see the project through. “She’s carrying the ball on this.”

As for Lapid’s opposition, it’s quite possible he was playing to his base—“paying lip service to the left half of his constituency,” said Leiter. He surmised that a deal will be struck in which the left-wing side of the government will request something in exchange for supporting Evyatar.

“Don’t be surprised if you find Lapid and [Defense Minister Benny] Gantz and company supporting some Palestinian building projects as a quid pro quo. That’s going to be their response,” he said.

“They’re not going to veto Evyatar’s creation,” continued Leiter. “What they’ll do is grant permits retroactively to Palestinian building areas. That’s been the pattern over the past year,” he said, noting similar cases like one last fall when Israel authorized Palestinian homes days after pushing forward plans to build Jewish ones.

Lending credence to Leiter’s view was the reaction of Meretz Party leader Nitzan Horowitz in July when the deal was first struck. Rather than abandon the coalition (after condemning the deal in the strongest possible language), he instead demanded in return a halt to the destruction of Palestinian homes in the Jerusalem neighborhood of Silwan.