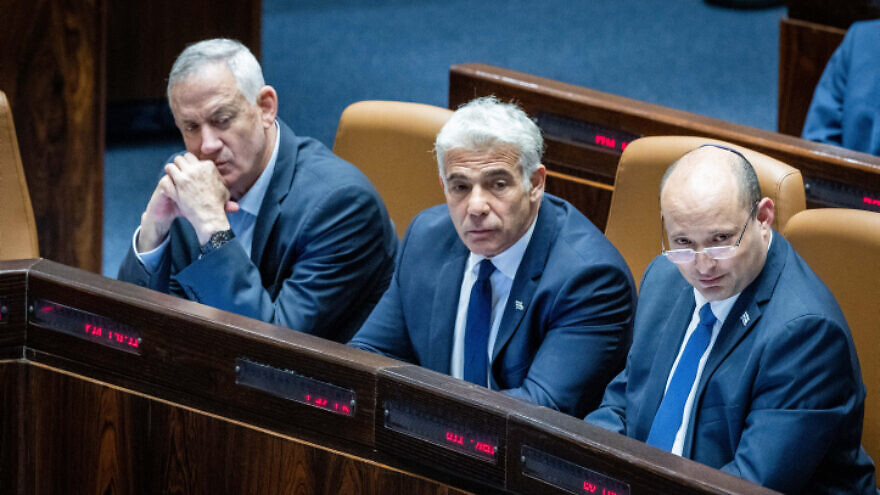 (June 7, 2022 / Israel Hayom) Israel’s government suffered a double blow on Monday that could impact its future and potentially lead to early elections.

The first setback came when the coalition failed to pass a bill Justice Minister Gideon Sa’ar defined as critical to the government’s survival. The provisions of the Emergency Regulations—Judea and Samaria, Jurisdiction and Legal Aid Law, enacted in 1967, are due to expire at the end of the month. Sa’ar moved for their extension, but the bill was defeated by a vote of 58 to 52.

This could spell legal chaos for some 500,000 Israelis living in the area.

The vote was seen as a key test on the future prospects of Israeli Prime Minister Naftali Bennett’s government, and highlighted the paradoxical situation where some of the settlements’ biggest opponents in the government voted for the bill, while hardline parties that support the settlements voted against it in order to weaken the government.

The vote did not immediately topple the government, and it is still possible for the coalition to present a modified version of the bill.

“As always, after we lose, we will return stronger and win in the next round,” tweeted Foreign Minister Yair Lapid after the vote.

It is unclear how Sa’ar will react. The justice minister, who heads the New Hope Party, had threatened to leave the coalition if the bill didn’t pass. If New Hope exits the government, it could give the opposition the votes it needs to trigger new elections or form a new government.

Before the vote, he warned, “Any coalition member who doesn’t vote for this law, that is so central, is an active participant in its demise.”

However, the opposition, made up mainly of nationalist parties led by former Prime Minister Benjamin Netanyahu, showed its willingness to forsake its pro-settlement ideology in order to bring down the coalition.

“The Likud will burn the state for Netanyahu’s needs,” it said, vowing to find a way to pass the proposed legislation.

Likud Knesset member Yariv Levin welcomed the result of the vote, saying, “We are one step closer to the end of the failed left-wing government. A government that is unable to pass basic Zionist and security laws has no right to exist.”

Religious Zionism Party leader Bezalel Smotrich said, “Tonight it has once again been proven that this government relies on anti-Zionist elements and it cannot take care of the most basic values ​​and needs of Israeli citizens. This government has no right to exist.”

The Likud issued a statement saying, “Bennett—go home. It’s over. It’s time to bring Israel back to the right.”

Later on Monday evening, the coalition suffered another defeat when it failed to ratify Minister of Knesset Matan Kahana’s appointment as religious services minister.

Kahana served as religious services minister until last month, when he resigned his post so as to return to parliament to serve as a Yamina Knesset member in a bid to bolster the coalition, which was faced with losing Yamina member Yomtob Kalfon. That crisis was seemingly resolved and Bennett sought to reinstate Kahana as a minister, but the move met with unexpected opposition.

The vote on the appointment ended with a 55-55 tie. Former coalition whip Knesset Member Idit Silman voted against the appointment, risking expulsion from Yamina.

He later blasted Silman, saying she “proved with her actions that she does not see herself as part of the Yamina faction, and I believe there will be consequences in the future.”

The latter would preclude her from vying for a seat in the next Knesset elections with any other party, or being appointed a minister in the current Knesset if a new government is formed by the opposition.