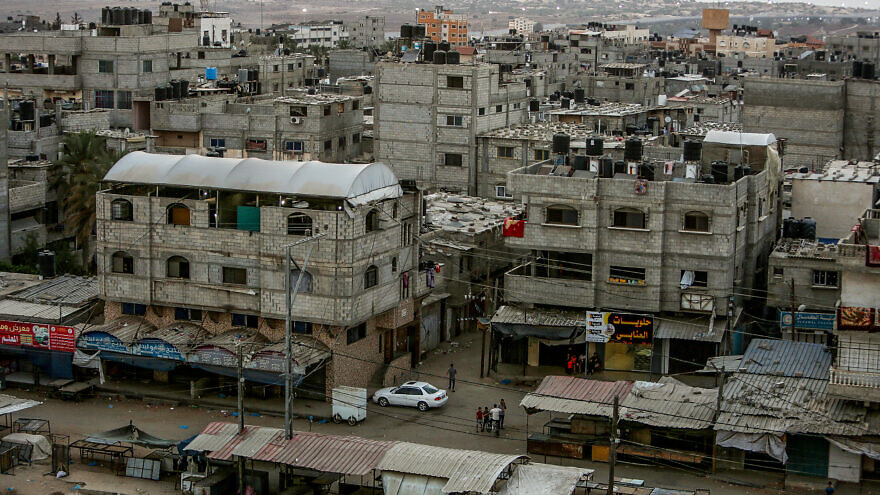 (July 29, 2022 / JNS) A key goal of Israel’s defense establishment is to delay frequent war to the extent possible in order to give Israeli civilians extended periods of calm and to allow Israel’s economy to continue to develop.

As part of that goal of conflict delay, the Israel Defense Force’s Coordination of Government Activities in the Territories Unit has been taking increasingly bold steps in the Gaza Strip in the past year to improve the economic situation of Gaza’s estimated 2.2 million civilians, thereby contributing to the stability of the region to a degree.

“We don’t want to have a war or round of escalation every year—not because we can’t but because it’s bad for development in our area and for the State of Israel,” an IDF official stated on Wednesday.

He warned, however, that this objective is constantly undermined by the “existence of the Hamas terror organization; all it does is prepare for war.”

While Israel builds and replenishes its military deterrence against Hamas in Gaza, it also pursues a civilian economic policy—one that has changed since Hamas first took over Gaza in a violent coup in 2007, ousting its rival Fatah.

Since the completion of “Operation Guardian of the Walls” in May 2021, Israel has taken unique steps to promote Gazan economic well-being, such as increasingly growing the number of Gazans with daily work permits in Israel, which is set to soon rise to 20,000.

While fighting Hamas’s force build-up every day, the official said, Israel is allowing thousands of Gazans into Israel to work, while also promoting the development of factories in the Strip, fishing, agriculture, and imports and exports.

This comes despite the fact that Israel must also be on alert to the use of civilian commodities that enter the Strip and that are often used by Hamas for military purposes.

“We know that Hamas does everything to exploit equipment and means that enter Gaza,” said the official, adding that Hamas could also send terrorists into Israel for attacks.

A thorough screening mechanism was set up between the IDF’s Southern Command and the Shin Bet in order to prevent this from happening.

“Someone earning 30 to 60 shekels in Gaza a day is making 400 shekels a day in Israel, and sometimes 600,” said the official. “We are looking at how this influences the extended family of the employee, not just the close family.”

“What’s our logic? We want to distinguish between civilians and terror organizations. We want to be precise,” said the military source.

“We are talking about a broad civil program. Until ‘Guardian of the Walls,’ despite the headline of Israel seeking an arrangement for Gaza, small steps were taken. We’d receive a new vegetable type for export from Gaza and that would be seen as dramatic. Today, we facilitate the export of all vegetables and in large numbers,” said the source.

Such steps are coordinated with the Palestinian Authority, specifically its Ministry for Civilian Affairs. “We need someone who can correspond with us,” the official explained. “We’d like to see a Gazan economy with its own manufacturing. Developments in agriculture and fishing, and future development of industry, of bigger projects. This can lead to investments in Gaza by Palestinians from Judea and Samaria, and from Israeli Arabs who may want to invest in factories,” he said.

The next stage, he argued, would be to create regional investment in Gaza.

The decision by Israel to recognize and grant legal status to some 9,000 Palestinians in Gaza, who until now lacked recognized IDs and could not even open bank accounts, was another step in this direction, said the official. “People waited for this for 23 years, and no one saw them. This is a dramatic event,” he added.

Quantities of import and export traffic moving through Kerem Shalom Crossing with Israel have increased significantly, while in the past 12 months, the Erez border pedestrian crossing also saw a major increase. 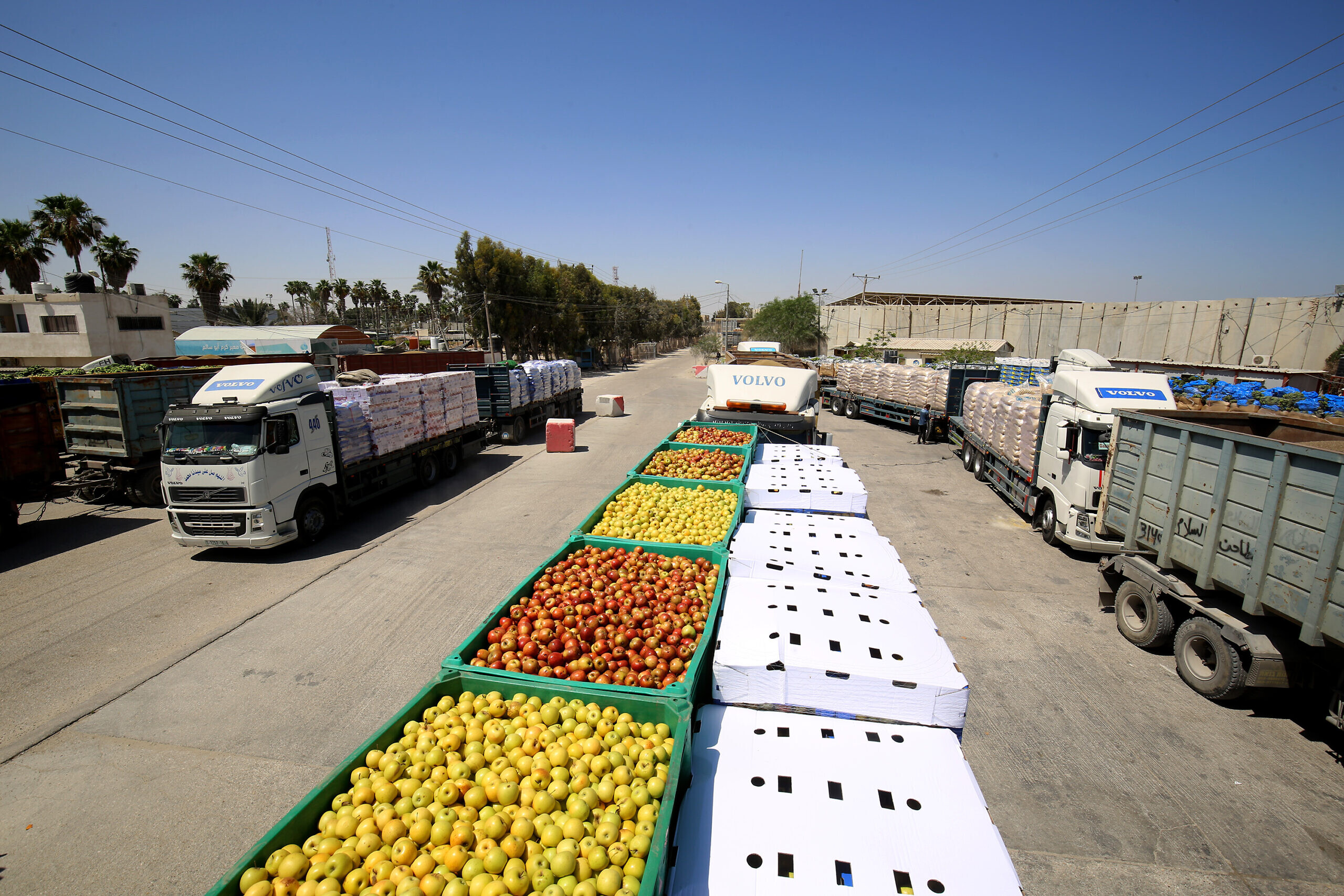 Trucks loaded with food pass into Rafah through the Kerem Shalom Crossing, the main passage point for goods entering Gaza from Israel, on May 25, 2021. Photo by Abed Rahim Khatib/Flash90.

These civilian policies could all be immediately undermined by a security escalation, the official cautioned, and a breach of Israeli sovereignty by Gaza’s terror factions.

“If tomorrow, ‘Operation Guardian of the Walls’ occurs, all of this would likely stop and some could be reversed,” he said.

“Two weeks ago, Hamas fired two rockets, and hundreds of thousands of Israelis went into a safe room. We said at the time that we want to separate between Hamas’s desires and the Gazan public,” added the official.

Still, the rockets led to a decision to freeze a planned move to increase the number of Gazan work permits by 1,500. Currently, the number of permits stands at 14,500, and the government has authorized 20,000 permits to be given within two months.

Despite the steps described above, Hamas’s ongoing illegal custody of two Israeli civilians who entered Gaza due to mental health problems, and its possession of the bodies of two IDF personnel killed in the 2014 war between Israel and Hamas, continues to put a dampener on the extent of steps Israel is currently willing to take in the civilian-economic sphere.

Still, the official said, in Gaza, there are more than 2 million civilians who “want to live, to develop and want to have hope. A terror organization is there unethically holding two civilians—one of whom is sick,” said the source.

“We don’t punish the Gazan public, but in our ethical system, this [holding of Israelis] by Hamas remains deeply important to us. There are some steps that can only be taken after this is resolved,” he stated.

The source also addressed the key question of the extent that Israel’s civilian policies in Gaza affect Hamas’s decision-making.

“Hamas wants legitimacy. We know after ‘Guardian of the Walls’ that it wants to be the guardian of Jerusalem. It tried to connect to its public via the religious theme of the Temple Mount, and to other publics [the Arab-Israeli public in Israel]. It creates significance for what it does,” said the source.

“If tomorrow morning, civilians can’t cross into Israel at Erez for work, what will Hamas tell that civilian? Last Ramadan [in April-May], Hamas had the goals of setting the Temple Mount on fire [with violence], and shaking up Judea and Samaria, and if possible, Arab Israelis, too. It didn’t succeed in doing any of that,” said the source, despite the series of deadly terrorist attacks that occurred at that time.

Still, the source warned, “on the day that Hamas finds itself in distress, it won’t care about civilians in Gaza or the Gazan public. It will want to implement its strategy. It can reach the stage where Hamas will sacrifice civilian policies for its needs. Hamas doesn’t want Gaza to be Tel Aviv. It wants to preserve a large dependence on it by the Gazan population.”