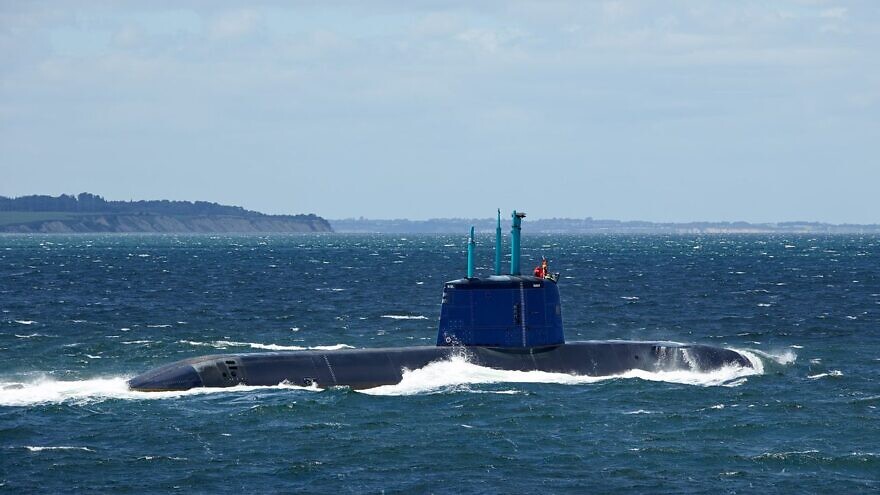 (February 7, 2022 / JNS) The announcement on Jan. 20 by the Israeli Defense Ministry and Germany’s ThyssenKrupp Marine Systems of the procurement of three new advanced submarines for the Israeli Navy marks a key milestone in the evolution of Israel’s fleet, which will consist of six submarines.

In a reality in which Israel’s adversaries are armed with missiles that can strike any land point in the state, the strategic value of Israel’s underwater long arm is on the ascent, even more so in light of the expected advanced capabilities that the new Dakar-class submarines are expected to carry onboard.

The class of submarines is named after the INS Dakar, a diesel-electric Israeli submarine that sunk in 1968 in the Mediterranean on its route from Britain to Haifa Port after being purchased from the United Kingdom.

Israeli Defense Minister Benny Gantz noted that the new vessels “will upgrade the capabilities of the Israeli Navy and will contribute to Israel’s security superiority in the region”—hinting at their multiple abilities, which will include the capacity to remain submerged for more extended periods, gather intelligence off enemy coastlines and strike targets deep in enemy territory or at sea.

The 3 billion euro ($3.4 billion) deal will see the first Dakar-class submarine arrive in nine years, as well as the construction of a submarine simulator in Israel, and spare parts supplies. The German government will subsidize a portion of the agreement via a “unique grant,” said the Defense Ministry, in accordance with an agreement signed between the countries in 2017.

The Defense Ministry declined to comment on a report by The Marker business daily published in recent days, which said that Thyssenkrupp had significantly raised the procurement’s price, from 1.8 billion (nearly $2.1 billion) to 3 billion euros ($3.4 billion). The report said that Israel will likely pay 2.4 billion euros ($2.7 billion) out of the total price tag (with Germany subsidizing the rest).

Alongside the deal, the two sides signed an industrial-strategic cooperation agreement that will see Germany’s Federal Ministry of Economics and Technology invest 850 million euros ($973 million dollars) in Israeli industries, including defense companies.

Past experience has shown that much time passes from the stage of formulating the specifications of new submarines to the production stage.

According to Professor Rear Adm. (Res.) Shaul Chorev, head of the Haifa Research Center for Maritime and Policy Strategy at the University of Haifa, and a former Israel Navy Submarine Flotilla commander, it took no less than 17 years for the 1980 specifications of the first-generation German-made Dolphin submarines to be turned into final vessels.

It is those three late 1990s-era vessels that will be replaced by the Dakar series. They will join three new-generation Dolphin submarines—two of which, the INS Rahav and INS Tanin, are already in the Israeli Navy’s possession—and the third, the INS Dragon, reportedly expected at Haifa Base’s submarine terminal next year. These vessels are equipped with air-independent propulsion (AIP) systems that generate electricity from hydrogen and water.

These diesel-powered submarines can thus remain submerged for longer, and their quiet engines mean they can evade enemy sonar detection with efficiency.

The AIP submarines are equipped with technology that goes back to the early 1990s, so the Dakar submarines will require much newer technological capabilities. This will likely involve, among other things, new engine designs, generators and electronic-sensor systems rather than the older periscopes.

Past disputes over the correct size of the submarine fleet that serves Israel’s needs have been a common feature between Israeli governments and the Israel Defense Forces.

It was former Prime Minister Benjamin Netanyahu who overruled the IDF’s preference for five vessels in the past, opting for six instead, and his decision received the approval of an official ministerial acquisition committee.

It appears as if Netanyahu’s call was the correct one to make in light of the dazzling contribution each such platform—the most expensive military platform in the IDF’s inventory, pricier than fighter jets—provides to state security.

“Five is the minimum; six is the optimal [number]. Six submarines will provide us with much flexibility, but we can make do with five,” Col. L., then head of the Israeli Navy’s Submarine Department, told Maariv in 2018.

Each submarine is able not only to travel covertly towards enemy states, gather intelligence and strike targets with great precision, but the platform also, according to international media reports, serves as a fundamental pillar of Israel’s nuclear deterrent posture and second-strike capability.

In 2019, Chorev warned in an interview with JNS that “the State of Israel is losing its strategic depth.” He noted that “today, the country is at risk from missiles from all directions. As [Hezbollah chief Hassan] Nasrallah has said, they can strike targets from northern Israel to the Dimona nuclear core. They know all of Israel’s strategic targets.”

It is for this reason, he concluded, that it is vital to identify the sea as the source of added Israeli strategic depth.

Submarines are turning into a modern-day elite force due to their underwater stealth movements, and modern naval powers worldwide are increasingly coming to view submarines as the go-to platforms for missions that were more traditionally associated with surface ships in the past.