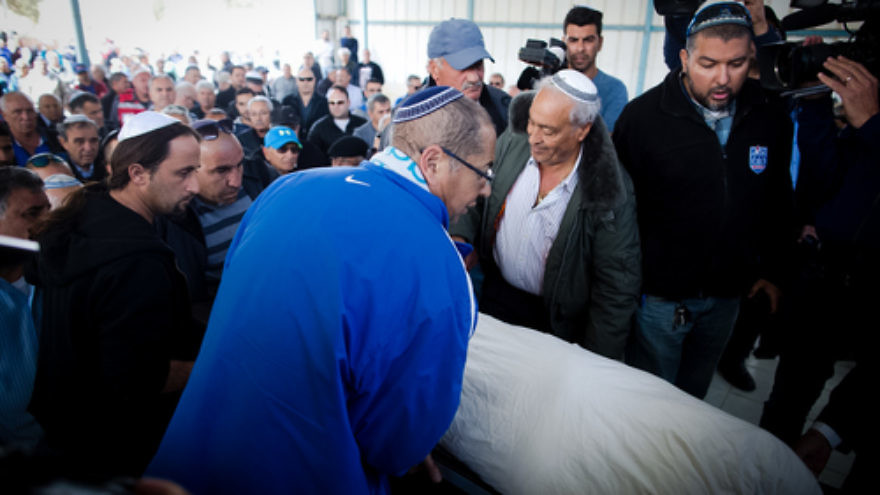 Click photo to download. Caption: The March 21 funeral of Simcha Damri, one of three Israelis who was killed in the March 19 suicide bombing in Istanbul. Credit: Flash90.
Republish this article
1510 WORDS
Spread the word.
Help JNS grow!
Share now:

(March 25, 2016 / JNS) The tragedy of Israeli deaths in the recent Istanbul suicide bombing might have somewhat of a silver lining for Israel, with the attack generating a brief moment of solidarity between the Jewish state and Turkey as they seek to confront the mutual threat of Islamic terrorism emanating from Syria. Does this moment portend longer-term improvements for frayed Israeli-Turkish relations?

While initial reports were quick to blame the Kurdistan Workers Party (PKK), a Kurdish militant group fighting the Turkish government for an independent state, it was later determined that the bomber, Mehmet Ozturk, was a Turkish citizen affiliated with the Islamic State terror group. Additional reports indicated that the terrorist may have followed the Israeli tourists from their hotel to a restaurant, then waited for them to finish eating before blowing himself up.

In the immediate aftermath of the attack, Turkish leaders—including President Recep Tayyip Erodgan and Prime Minister Ahmet Davutoglu, who have both been widely known for their outspoken anti-Semitic and anti-Israel rhetoric—were quick to send condolences to Israel.

“I want to send my deepest condolences to the Israeli people and the families that lost their loved ones in this traitorous attack in Istanbul, as they were visiting the city and wanting to get to know our culture better,” Erodgan wrote in a letter.

“I want to express my condolences to the families of Israeli citizens who lost their lives in the despicable attack and to the people of Israel, and I wish the injured a speedy recovery,” said Davutoglu.

Meanwhile, Erdogan’s AKP political party also took the unprecedented step of expelling a low-level official, Irem Aktas, for tweeting that she “wished that the wounded Israeli tourists were dead.”

On March 23, the goodwill continued when Israeli President Reuven Rivlin phoned Erdogan to thank him for the condolences. Erdogan responded by reiterating that he felt “deep sadness” for the Israeli victims, adding that Turkey is “ready to cooperate with Israel against terrorism.”

In addition to the expressions of goodwill, the Israel Defense Forces was allowed to land in Turkey to bring home Israel’s killed and wounded victims, a move that would have been unheard of in recent years at the height of Israeli-Turkish tensions. Dore Gold, the director general of Israel’s Foreign Ministry, also visited Turkey to tour the scene of the Istanbul attack. Gold said, “There is no doubt that the Turkish authorities did the maximum to help Israelis who were in distress and remove the bureaucratic barriers that normally exist after such events.”

Louis Fishman, an assistant professor of history at Brooklyn College who has lived in Turkey and writes about Turkish-Israeli affairs, said he believes the recent attack can “absolutely be an opportunity for both countries to build relations.”

“Israel was able to fly in army planes and Israeli soldiers were on Turkish soil, which you haven’t seen in a very long time,” Fishman told JNS.org. “It is almost like they snapped back into how they used to work together many years ago.”

Yet despite the recent goodwill between Turkey and Israel, overcoming years of rampant anti-Semitic and anti-Israel rhetoric by Turkish leaders, as well as fundamental disagreements over Israeli policies towards the Palestinians, might be a difficult task.

Turkish-Israeli relations broke down following the 2010 Gaza flotilla incident, in which Israeli commandos boarded the Mavi Marmara, which was attempting to break the blockade of Gaza. After Turkish militants attacked the Israeli commandos, nine Turkish citizens were killed in clashes. In 2013, at the request of U.S. President Barack Obama, Israeli Prime Minister Benjamin Netanyahu apologized over the phone to Erdogan for the flotilla incident.

Israel and Turkey have been close to normalizing ties before. In April 2014, Erdogan told Charlie Rose of PBS that a deal for “normalization” would be signed within a few weeks. But shortly afterward, Israel’s Operation Protective Edge was launched in Gaza, leading to scathing condemnations of the Jewish state by Turkish leaders. The two sides were close to normalization again late last year, when reports indicated that Turkish and Israeli officials had agreed on a compensation fund to pay the families of the nine Turks killed on the flotilla. Under that arrangement, which to date has not been finalized, all Turkish legal claims against Israel would be dropped and ambassadors would return to both countries.

“Every six months or so, there are reports that the two sides are on the verge of a deal, but there is still lots of wariness and distrust between the two sides. The biggest sticking point is the Gaza blockade, and it isn’t one that is easy to resolve,” Michael Koplow, an expert on Turkey and the policy director for the Israel Policy Forum think tank, told JNS.org.

“Turkey has maintained its three conditions for reconciliation—apology, compensation, and a lifting of the blockade—since 2010, and while the first two have already been hammered out, the Gaza issue will remain thorny,” Koplow added.

At the same time, Israel has serious issues with Turkey’s support for the Palestinian terror group Hamas.

“Jerusalem views this policy as extremely unhelpful, as actively damaging to resolving the Israeli-Palestinian conflict, and there is conjecture that Hamas would have collapsed by now in Gaza were it not for Turkish patronage,” Koplow said.

During the flurry of reports of Turkish-Israeli rapprochement late last year, Turkey did expel a top Hamas operative, Saleh al-Arouri, from the country last December. Al-Arouri was one of the founders of Hamas’s “armed wing” and is considered to have masterminded Hamas’s kidnapping and murder of three Israeli teenagers in Gush Etzion in June 2014.

Besides the Istanbul attack, what’s behind the recent softening of Turkey’s anti-Israel stance? It might be that violence from the civil war in Syria, which recently passed the five-year mark, is beginning to spill over into Turkey.

“The situation in Turkey is highly unstable. Turkey is simultaneously dealing with terrorist attacks from the Islamic State and the PKK, and there isn’t an obvious end in sight to either,” said Koplow.

Recent attacks in Turkey haven’t been limited to Istanbul. There were two deadly bombings in the capital of Ankara, one on March 13 that killed 37 people and another on Feb. 17 that killed 30. Both attacks were blamed on a group called the Kurdistan Freedom Falcons (TAK), a Kurdish nationalist militia that is seeking an independent Kurdish state in southeastern Turkey.

Yet another attack, on Jan. 12, was carried out by Islamic State and killed 13 visitors to Istanbul, a similar situation to the latest attack.

“Turkey has experienced periods like this in the past, when the streets of Turkish cities became battle zones, and the combination of these attacks along with the government’s crackdown on all sorts of political challengers, media outlets, and even individual academics make the current situation as bleak as it has been in decades,” Koplow said.

The instability in Turkey might play to Israel’s advantage, Brooklyn College’s Fishman believes.

“With the instability in Turkey right now, they (the Turks) need to score points, especially with the United States. The best way to get that is through Israel,” Fishman told JNS.org.

“Turkey is also nowhere the regional power it was in 2010, when relations broke off [with Israel],” he dded. “Turkey needs Israel because the region has changed. You have a divided region, a war in Syria, and tensions between Saudi Arabia and Iran.”

At the same time, Israel may be able to wait to see how things play out in order to possibly gain more leverage in negotiations with Turkey.

“Erdogan has made some really good comments to Israel, almost courting Israel. However, Netanyahu is sitting back strong right now and doesn’t seem like anything is going to happen. He didn’t look overly excited about Turkey’s recent comments and moves. He was very practical and to the point in his comments towards Turkey,” Fishman said.

Regardless of the motive or strategy on either side, cooperation between Israel and Turkey—which have two of the region’s most powerful militaries and most advanced economies—would be seen as a positive force in a region beset by Islamic terrorism, civil war, and tension.

“Increased Israeli-Turkish cooperation would be a stabilizing force for the region in a number of ways,” Koplow said. “Coordination on Syria remains vitally important. There is lots of potential for Turkey to be a purchaser of Israeli natural gas, and despite Israel’s much harder-line view of Iran and its nuclear program, both Israel and Turkey have a strong interest in preventing Iranian regional dominance.”

He added, “If the two sides are able to overcome their differences and reconcile, and assume even a portion of the military and intelligence cooperation that existed [between them] in the past, it will unquestionably be a net positive overall.”