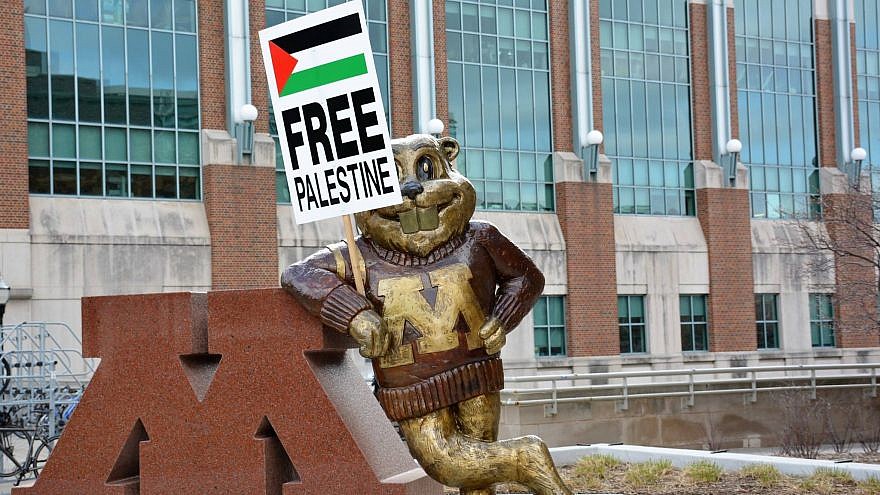 A “Free Palestine” sign on display with the University of Minnesota's gopher mascot that was erected by the school's Students for Justice in Palestine chapter. Credit: SJP via Facebook.
Republish this article
1324 WORDS
Spread the word.
Help JNS grow!
Share now:

(August 11, 2021 / JNS) A number of Jewish groups have significant concerns about how Israel’s conflict with Hamas in the Gaza Strip this spring will correlate into anti-Jewish sentiment on North American college campuses as the fall semester begins.

Most colleges are resuming in-person and on-campus classes after nearly three semesters of virtual learning as a result of the global coronavirus pandemic. Even with the rapidly spreading Delta variant, universities are getting ready to start in full force, at least for now. While pro-Israel and Jewish students are looking forward to some sense of pre-pandemic normalcy at their schools, being back on campus means they also risk facing pro-Palestinian activists and renewed efforts at demonstrations against the Jewish state.

It also comes in the backdrop of the July 19 announcement by the Ben & Jerry’s ice-cream company not to sell their products in what they deem the “Occupied Palestinian territory”—namely, the West Bank and eastern Jerusalem. The Aug. 1 anti-Israel “intifada” rally in Brooklyn, N.Y., also has lingering effects.

Still, Jewish groups point to the criticism faced as a result of the Israel Defense Forces’ “Operation Guardian of the Walls”—criticism that led to a spate of anti-Semitic attacks in the United States and around the world. It came despite the fact that Hamas induced the conflict with rocket fire towards Israel; in the course of 11 days, the terrorist organization that runs Gaza launched more than 4,000 rockets at Israeli population centers, though many fell short of their target and landed locally, causing Palestinian fatalities and injuries.

“To us, that was a turning point: It was a bad situation before, but it got worse starting in May,” Matthew Berger, Hillel International’s vice president for strategic action programs and communications, tells JNS. He noted that Hillel International, which recently launched a partnership with the Anti-Defamation League to combat anti-Semitism on campus, noticed an “unprecedented” amount of anti-Semitic activity in May and June immediately following the conflict. Students were attacked in the streets and on social media, targeted and isolated simply for being Jewish.

He also noted that many college student groups took anti-Israel actions in May when many other campuses had already emptied out for the summer, “so we’re concerned that students may try to catch up and take anti-Israel positions or commit anti-Israel activities because they didn’t have the opportunity to do last spring.”

Hillel is additionally concerned about a rise in pro-BDS resolutions that are almost certain to be raised and voted on by student unions and governments. “The phenomenon that we saw during the conflict in spring was student government leaders writing unilateral, biased statements against Israel without going through the resolution process and without giving Jewish and pro-Israel students an opportunity to engage or express their values. We’re certainly concerned that activity will rise in the fall as well.”

‘Every opportunity to spread hate and misinformation’

Carly Schlafer, director of communications at the Israel on Campus Coalition (ICC), told JNS that during the 2020-21 academic year, 37 anti-Israel resolutions were introduced in student government—17 of which came after the start of the Mideast conflict. Student groups and faculty associations on 152 university campuses released anti-Israel statements.

“Campus life does not exist in a vacuum,” says Schlafer. “Rather, national, global, and increasingly, digital events and circumstances deeply influence activity on campus. Students returning to campus will be facing an in-person reality deeply intertwined with a digital one. And for pro-Israel and Jewish students, that digital experience is increasingly rife with anti-Semitic, anti-Zionist harassment. This means the challenges facing students on campus are even more complicated, complex, and in many cases, more disparaging than in prior years.”

Since the start of 2021, some 472 cases of anti-Semitism have been reported on college campuses, according to the AMCHA Initiative, which tracks such instances, including the targeting of Jewish students and staff, anti-Semitic expression and BDS activity.

CAMERA on Campus recently held its 11th annual International Student Leadership Conference online, where students from North America, the United Kingdom and Israel discussed their academic institutions and issues that may arise in the upcoming academic year.

Hali Spiegel, CAMERA’s director of campus programming and strategic relations, told JNS that among the top concerns for pro-Israel and Jewish students is the false information and “distorted accounts” that are “bound to appear” in response to the Hamas rocket attacks in May.

She also says that after an “incredibly successful academic year” of seeing universities adopt the International Holocaust Remembrance Alliance (IHRA) working definition of anti-Semitism, she thinks there will be “a trend” in more anti-IHRA definition resolutions—for example, the one passed by the University of Houston student government in mid-July, which was backed by Students for Justice in Palestine.

“We have seen and expect to see more outright declarations to boycott all of Israel for its ‘apartheid’ policies,’ ” she says. “Even though we expect anti-Israel activism to be even more robust than in past years, our CAMERA Fellows and CAMERA on Coalition members are prepared to combat the lies perpetrated by groups such as Students for Justice in Palestine.”

Roz Rothstein, co-founder and CEO of StandWithUs, says the Israel-Hamas conflict “showed once again that anti-Israel activists will use every opportunity at their disposal to spread hate and misinformation about the world’s only Jewish state.”

She adds: “In their effort to rewrite history and deny Jewish rights, these activists will continue to promote anti-Semitism on campus via divestment campaigns, academic boycotts, anti-Israel statements, petitions, study-abroad boycotts, continued disruptions of in-person and Zoom events, and more. Now, more than ever, Jewish and pro-Israel students must remain proud of who they are and stand up for their civil rights and values, as they educate their peers and courageously fight anti-Semitism on campus.”

For that reason, he believes that grassroots pro-Israel activism is especially important since “it has been a while since groups were engaged in face-to-face advocacy efforts, and it is a skill that needs to be practiced.”

He explains that “the virtual connections and many recent events, both locally and in the Middle East, formed solid coalitions against Israel, and we see a joining of radical voices that include Students for Justice in Palestine and their progressive allies of students who hold the same toxic ideas about Israel and support BDS. The major task of the pro-Israel side will be the recruitment of new members. An urgent issue is to build and maintain coalitions to counter the anti-Zionist and anti-Semitic forces that were created, correct misinformation and establish ourselves as the source of knowledge about Israel on campus.”

Schlafer suggests working with and supporting students trying to share accurate information about the Middle East and the threats facing Israel.

Berger shares a similar sentiment, saying one of the best ways to address anti-Semitism is to build “strong, thriving Jewish communities on campus that demystify Judaism to the full campus community.”

He also notes the importance of working to educate university administrators “so they understand their role in addressing anti-Semitism, speaking out when they see it and not allowing anti-Semitism to go unchallenged on their campuses.”

Of course, that requires time, training and effort that add to students’ already busy schedules. It also necessitates the know-how to approach those in charge, which can justifiably be intimidating.

Still, Berger makes it a point to say that “the same way university administrators have made a concerted effort to address racism and sexual misconduct, and in being outspoken in protecting the LGBTQ community, we want them to also address the concerns of the Jewish community and the rise of anti-Semitism on their campus as well.”