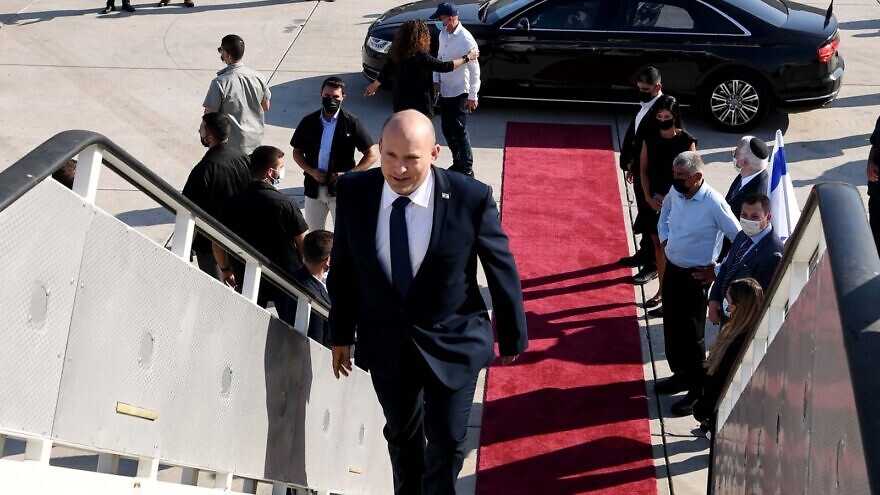 (August 24, 2021 / JNS) The fallout from U.S. troops leaving Afghanistan has taken over news headlines and will likely overshadow the upcoming first in-person meeting between U.S. President Joe Biden and Israeli Prime Minister Naftali Bennett at the White House on Thursday, even geared as it is with the aim of solidifying and strengthening ties between the allies, and bolstering regional security.

While other members of the Israeli government have in recent months been meeting with their American counterparts, Bennett will be the first new Israeli prime minister in more than a decade, and unlike his predecessor, is not acquainted with Biden. Fingerhut emphasized the relationship between both administrations to show continuity.

“From the perspective of Jewish Federations of North America, the most important thing that we want to see is the building of the relationship between the prime minister and the president, and the fact that this is happening despite COVID and despite the challenges that Israel faces, the challenges that the United States faces in the United States and elsewhere, I think is very significant, and it transcends any specific issue we might wish to raise,” he said.

Jewish organizational leaders in the United States largely agree on the topics the two leaders are expected to discuss, with the international threat of a nuclear and belligerent Iran heading the list of priorities.

“The most important thing that can come out of this is a good rapport between the prime minister and the president, [so] they can start to build a very productive working relationship,” said Nathan Diament, executive director of the Orthodox Union Advocacy Center. “I would say what’s good for the atmosphere in the American-Jewish community is for there to be a good, friendly, productive relationship between the president of the United States and the prime minister of Israel because if there’s friction, then that creates tension with the community as well.”

‘An opportunity to close any gaps’

Both administrations have departed from the policies of their predecessors to varying degrees and have a number of divergent opinions with each other. Biden has notably sought to re-enter the Iran nuclear deal, which former President Donald Trump left in 2018, as well as restore aid and ties with the Palestinians, which Trump also severed. While Bennett, a right-winger, likely shares his predecessor’s views on Iran and the Palestinians, he may lack the clout to sway Biden on the issues.

Dan Mariaschin, CEO of B’nai B’rith International, hopes that the conversation could move the two nations closer to an agreement on certain issues.

“I think, hopefully, in light of the Taliban takeover in Afghanistan and the election before that of Ebrahim Raisi as president of Iran, that there would be an opportunity to perhaps close any gaps that might have existed before between the two governments on the Iran issue,” he said. “Israel, of course, has all along expressed its justified opposition to any deal with the Iranians that would create some kind of daylight for them to continue in some way—whether it’s sooner or later—their nuclear program. And now, impacted by the Taliban takeover in Afghanistan, all of this should be put on pause because we really have to assess what this means for the Iranians in terms of the opportunity for additional instability to be fomented throughout the region.”

Fingerhut said that Bennett should deliver the message that the threats of instability and radicalism that threaten Israel are the same as those that threaten the United States—the terroristic threat that reached American shores almost 20 years ago on Sept. 11, 2001, is also related to the recent war between Israel and Hamas.

The organizational leaders were concerned about the Biden administration’s willingness to enter the 2015 Iran nuclear deal—the Joint Comprehensive Plan of Action (JCPOA)—despite receiving any concessions from Iran.

“I hope what comes out of it is the sanctions that are still in place now will remain in place, and I hope [Bennett] puts pressure on Biden to not make a deal, at minimum, unless America can visit any military facility at will,” said Mort Klein, president of the Zionist Organization of America.

“Right now, it has to give a notice of 28 days. It’s ridiculous. They clear everything out,” he said. “So the three things he’s got to do is to say if you make a deal, you’ve got to have a much longer sunset period—20 or 30 years. Two, you have got to keep the sanctions in place until we see some sort of transformation of the regime towards a civilized society. And three, any new deal has to allow them to visit military facilities at will, not give them a 28-day notice.”

Organizational leaders also hope that the two sides agree not to let the United States dictate the timetable for Israeli-Palestinian peace, especially while Palestinian officials refuse to faithfully negotiate.

“The P.A. [Palestinian Authority] has not moved at all on pay-for-slay; funds are being given to UNRWA [United Nations Relief and Works Agency for Palestinian Refugees] … really with nothing substantial in terms of reforms, in terms of commitments to change school curricula. And now, there’s also the issue where the administration would like to reopen the consulate in eastern Jerusalem,” said Mariaschin. “And if one gives away all of your leverage, without receiving anything in return, then what should we expect?”

Mariaschin said that he hopes Israel’s concerns will be factored into American policymaking.

“There should really be no rush to conclude any kind of hasty return either to the table or to try to move on some kind of an arrangement without ascertaining that there would be something in return,” he said, adding that since the Abraham Accords signed between Israel and neighboring Arab nations a year ago, there have been encouraging signs for peace and stability in the region, despite the Israeli-Palestinian conflict not being resolved.

The consulate is a critical issue for Klein, who is opposed to its reopening, especially in Jerusalem.

“Israel is going to try to make it clear that they can’t open a consulate in Israel’s capital because this is a radical terrorist regime that has refused to negotiate for 12 years; pays Arabs to murder Jews and Americans; names schools, streets and sports teams after terrorists; and promotes hatred and violence against Jews in every aspect of their culture,” he said. “This would be the worst appeasement message imaginable—that despite their outrageous behavior, they’re being allowed to open up a consulate in Israel’s capital. This would undermine the thesis that this is Israel’s capital and send a message to them that they can get away with acting horribly and they still get rewarded.”

So far, it remains unclear if organizational leaders will meet with Bennett while he is in the United States, with COVID-19 creating the need to limit contact, and none of the leaders JNS spoke with scheduled to meet with the prime minister.

Another topic of conversation, of course, would be the uptick in anti-Semitic incidents in America and throughout the world, especially in the wake of the conflict between Israel and Hamas in the Gaza Strip in May.

Said Fingerhut: “I know that Prime Minister Bennett—because Jewish Federation leadership was with him just days before he became prime minister—cares deeply about the rise of anti-Semitism around the world. That he sees his role as prime minister as caring for the Jewish people around the world and I hope and expect that will be also a topic of conversation between them.”