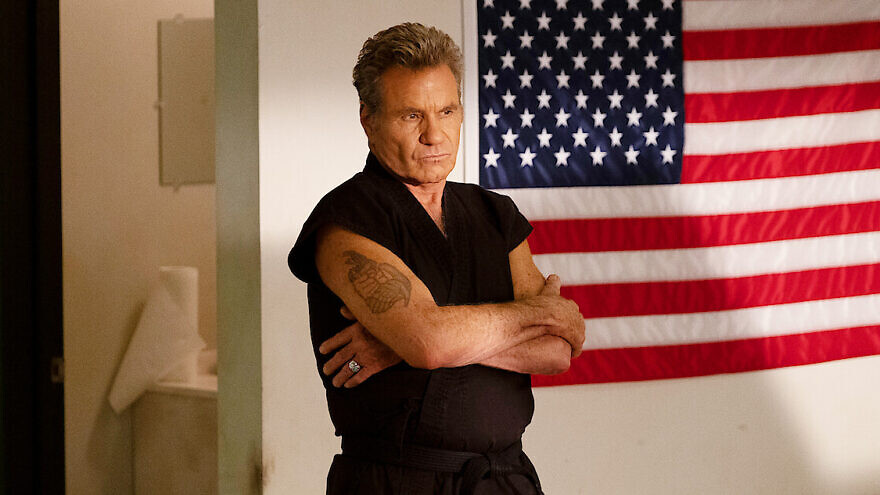 Martin Kove (pictured) agreed to reprise his role as John Kreese on the condition that his character showed some vulnerability. In real life, he misses some Jewish delicacies cooked by family members. Credit: Courtesy of Netflix.
Republish this article
1122 WORDS
Spread the word.
Help JNS grow!
Share now:

(September 30, 2022 / JNS) Martin Kove was born on Purim, and his most famous costume has been quite convincing. As the villain in the iconic “The Karate Kid” film franchise, he starred as John Kreese, a Vietnam War veteran and the karate sensei of the Cobra Kai dojo.

Kreese made life hell for Daniel LaRusso (Ralph Macchio) by teaching his aggressive students such mantras as “no mercy.” He famously instructed Johnny Lawrence (William Zabka) to “sweep the [injured] leg” of Daniel in their championship bout.

But in real life, Kove has visited many schools with an anti-bullying message. He’d often go with SuEllen Fried, an author and bullying prevention activist.

“People have been bullied since the days of Rome and Greece,” Kove told JNS. “I never thought there was an easy solution.”

He said that in speaking with Fried, the message they presented to youngsters was that one could simply walk away or use humor. A big point was that bystanders who watch people get bullied and don’t intercede are also to blame.

“The witnesses were as responsible as the bully,” Kove said. “If there wasn’t an audience, the person wouldn’t perform as the bully.”

There’s been quite an audience for “Cobra Kai,” one of Netflix’s top shows, whose 10-episode fifth season was recently released. Kove said the main feedback he received for the original film role from director John Avildsen (who won the Oscar for Best Director of “Rocky”) was to portray Kreese as a man full of anger or “flat out ice.”

When producer Josh Heald told Kove that he and fellow “Cobra Kai” writers and creators Jon Hurwitz and Hayden Schlossberg wanted him to reprise the role, Kove agreed, but on one condition.

“I wanted him [Kreese] to have more texture emotionally and have them write the character with a greater versatile outlook with flashbacks,” Kove said. “I didn’t want to appear as a one-dimensional character.”

The vulnerability Heald, Hurwitz and Schlossberg gave his character is seen by how he cares about Johnny (even though they fight) and Tory, played by Peyton List.

The writing is brilliant and in this fifth season, Chozen Toguchi (Yuji Okumoto), a nemesis from the second film, is brought back as an ally of Daniel. Mike Barnes (Sean Kanan), a villain from the third film, also returns.

Kove, 76, said he fondly recalls chanting his haftarah for his bar mitzvah in Brooklyn and a reception that was “a lot of fun.” Raised in a Conservative Jewish household, he said that until age 5, he lived near his grandmother and would enjoy spending Shabbos there and eating the carrot and prune dish known as tzimmes. Hee also enjoyed a Passover dish.

“When my mother made matzah brei, she didn’t crumble it up, she made it as a sheet,” Kove said. “She told me to run it underwater. Even when I moved to Hollywood, I could never make it. I would call her during Passover.”

He said she warned him not to let the matzah sit too long in oil.

“The Karate Kid” ends with Daniel kicking Johnny in the face and winning the All-Valley Championship. Kove said opinions differ on what is one of the most famous kicks in film history.

“It was a kick created by one of the stunt coordinators,” he said. “We never even thought about it being illegal. Years later, as we were further into karate, it was brought to our attention that the kick was illegal. I had for some time considered Billy Zabka, as Johnny Lawrence, The Karate Kid, because he was a victim of an illegal kick and society, and the cinematic world accepted it prematurely.”

In “Cobra Kai” we see a softer side of Johnny, who had little love from his parents and tries to be a better father to his son Robby Keene, played by Tanner Buchanan, and the son of the woman he dates, Miguel Diaz, played by Xolo Maridueña.

“Billy, Ralph and I like to do our own stunts,” Kove said, adding that a stunt double is used only occasionally.

One stunt that went slightly haywire was for a scene that is now the opening of “The Karate Kid Part II.” After strangling Lawrence, Mr. Miyagi (Pat Morita) pushes Lawrence away to save him and Kreese throws a punch. Miyagi steps aside, and Kreese’s fist goes through the window.

“I hurt my hand,” Kove said nonchalantly, adding that there were shards in his hand. “I looked at John Avildsen and I said, ‘This is not the hand of Arnold the Terminator.’”

Kove has had a hand in making “Cobra Kai” a success, and for the last two seasons, his character has been engaged in a power struggle with his old war buddy Terry Silver, played by Thomas Ian Griffith. Framed for a crime he didn’t commit, Kreese ends up in jail and it is believed that there’s an attempt on his life. Ironically, in “The Karate Kid Part III” Silver tricks Daniel into believing Kreese is dead. In “Cobra Kai,” Silver frames Kreese and may want him dead.

The original film trilogy was produced by Jerry Weintraub, whom Kove refers to as “the ultimate Jew.” Kove said he used Weintraub’s rabbi to officiate at his son’s bris (circumcision).

“I still have a picture of Jerry holding the baby,” Kove said.

Kove said that last Passover, after being told there was no room for a seder at one synagogue, he got a call that the rabbi was a big “Cobra Kai” fan and they had space for him after all, though Kove did not end up attending the services there. He does expect to make it to High Holiday services this year.

Kove has an entertaining podcast called “Kicking It With The Koves” with his son Jesse and daughter Rachel. In one episode, where the guest is Macchio, Kove says he believes the continued success of “Cobra Kai” 35 years later is a gift from God. Macchio says it’s important that the spirit of Miyagi (Morita died in 2005) lives on in the Netflix show. This spirituality allows Daniel, who owns a car dealership and is affluent, to become friends with Johnny, who can barely make ends meet.

The characters from the film trilogy, which evoke great nostalgia, were the brainchild of franchise creator, screenwriter Robert Mark Kamen.

Kove praised Macchio for his performances in both the films and the Netflix series. “You never violate the moment of truth,” Kove said on the podcast.

He told JNS he is excited that his 5-year-old grandson had his first karate lesson a few days ago.

“The greatest value of karate is how it improves your discipline in life,” Kove said.