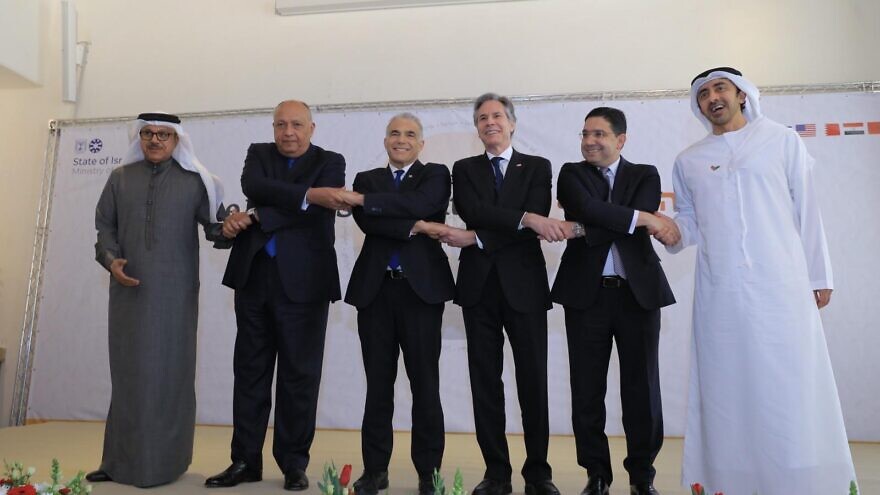 (March 28, 2022 / JNS) The Negev Summit featuring four foreign ministers from Arab countries—the United Arab Emirates, Bahrain, Morocco and Eygpt—together with Israeli Foreign Minister Yair Lapid and the U.S. Secretary of State Antony Blinken, broadcast a rare show of unity on Monday as the key players expressed their determination to work for stability in the region.

A host of issues affecting the region were discussed at a resort hotel in Israel’s southern Negev Desert. Of most concern was the threat posed by Iran as U.S. and world powers are reportedly close to an agreement that would revive the 2015 Iranian nuclear deal or Joint Comprehensive Plan of Action (JCPOA).

Israel and certain Arab states have long expressed their opposition to returning to the agreement, saying it will create a glide path to a nuclear Iran. The Biden administration supports restoring the deal, and as such, a near-evitable path for Tehran to acquire a nuclear weapon.

Lapid and Blinken were joined by Abdullah bin Zayed Al Nahyan of the UAE, Abdullatif bin Rashid Al-Zayani of Bahrain, Nasser Bourita of Morocco and Sameh Shoukry of Egypt.

Quoting Israel’s first prime minister, David Ben-Gurion, who with his wife, Paula, was buried only a short distance from where the conference was held, Lapid said at a press conference at noon on Monday: “History isn’t written, history is made.”

“What we are doing here today is making history—building a new regional architecture based on progress, technology, religious tolerance, security and intelligence cooperation,” he said.

Referring to Abraham Accords, Blinken noted that “just a few years ago, this gathering would have been impossible. … When leaders from Israel, Bahrain and the United Arab Emirates signed the Abraham Accords [in the fall of 2020], and Morocco and Israel signed a normalization agreement soon after, once impossible things become possible.”

“It’s impossible to anticipate all the new directions this can take us. This is a new dawn,” he said.

The ministers also announced that this first-of-a-kind meeting would become a regular event. “Last night, we decided to make the Negev Summit into a permanent forum. Together with our closest friends, the United States, we are today opening a door before all the peoples of the region,” said Lapid.

Casting a pall over the summit was the terrorist killing of two Israeli Border Police in a Sunday-night attack in the Israeli city of Hadera. All the participants began their statements by forcefully condemning the attack.

“Shortly after the attack, Islamic Jihad and Hamas praised it,” said Lapid. “They declared that it was a response to the Negev Summit that we are holding here. The terrorists’ goal is to intimidate us. To make us afraid to meet and build relationships and agreements between us. They will not succeed. We will not let them.”