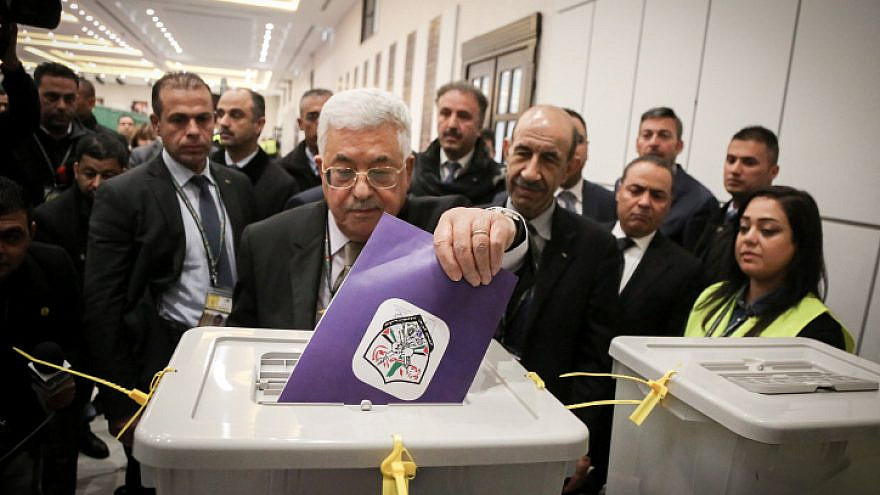 (February 22, 2021 / Israel Hayom) In 1996, Arab residents of eastern Jerusalem, which lies within Israel’s sovereign borders, took part in elections in the Palestinian Authority, thereby smashing a taboo. Israel, under the leadership of Yitzhak Rabin and Shimon Peres, had effectively recognized eastern Jerusalem Arabs’ ties to the P.A. The first crack had appeared in Israel’s official stance that Jerusalem must remain united under Israeli sovereignty.

The decision lies with Prime Minister Benjamin Netanyahu, but it will be made only after Israel’s March 23 Knesset election. In the meantime, the Americans aren’t stepping in, but the Biden administration is expected to back the Palestinian demand to hold its legislative election in eastern Jerusalem, too.

The P.A. legislative elections are slated to be held on May 22, but it’s not impossible that something will change at the last minute. If P.A. leader Mahmoud Abbas thinks he is going to lose to Hamas, or that Marwan Barghouti, currently serving multiple life sentences in Israel, stands a chance of beating him from behind bars, he will postpone the elections on one of two pretexts: Israel’s probable refusal to allow Arab residents of eastern Jerusalem to participate in the election, or the “impossible” conditions that Israel will insist upon if and when it allows them to take part.

The historic P.A. elections 25 years ago could be relevant to this year’s elections, and the issue illustrates how complicated and sensitive the question of eastern Jerusalem Arabs voting for the P.A. parliament is for both sides. 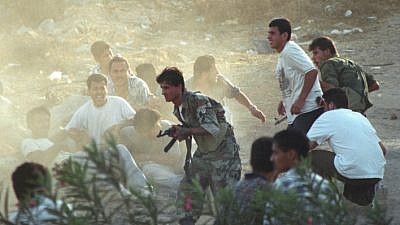 Palestinian gunmen take cover during an exchange of fire with Israeli soldiers in Ramallah on Sept. 25, 1996.
Photo by Nati Shohat/Flash90.

Back in 1996, it happened as the Oslo process was already turning bloody. Suicide bombers were blowing themselves up at Beit Lid Junction, in Ramat Gan and Jerusalem, while representatives of Israel and the P.A. were waging trench warfare in negotiations rooms over the issue of eastern Jerusalem. Israel was doing everything it could to play down the part of eastern Jerusalem residents at the polls. The P.A. was trying to maximize it.

The Palestinians demanded that Arabs in eastern Jerusalem vote at polling places. Israel insisted they cast ballots at post offices. The Palestinians wanted regular postal activity called off during the voting, but Israel wanted it to continue as usual. Another point of dispute arose when the Palestinians insisted that their election officials take the ballot boxes to Ramallah to be counted. Israel demanded that its own postal workers take them. 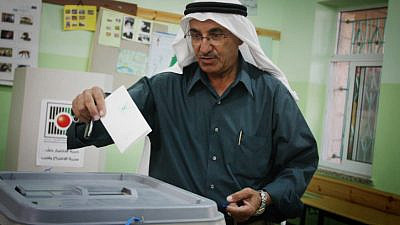 The disputes went on and on until compromises could be reached. The elections took place. Only a few thousand voters—mostly elderly and sick individuals—cast votes at eastern Jerusalem post offices. The rest voted at polling places in the Abu Dis neighborhood, which lies outside Jerusalem’s municipal boundaries and outside Israel’s sovereign authority.

Only 30 percent of eligible voters in east Jerusalem actually voted, compared to 70 percent in other areas. Many feared that by voting they would lose their Israeli residency status. Others simply didn’t care. The low turnout underscored the growing alienation of eastern Jerusalem residents from the residents of the West Bank, a process that continued when Israel built its security barrier in the first few years of the 2000s.

This time, the political reality is different, both in Israel and for the Palestinians. The demand that eastern Jerusalem Arabs be allowed to participate, both in May to vote for the PLC and then on July 31 to elect the P.A. president, comes after the Trump administration recognized the city as the capital of Israel and relocated the U.S. Embassy there. Associates of Netanyahu are warning that if east Jerusalemites take part in the P.A. elections, it could diminish Israel’s victory and call into question Israel’s sovereignty in Jerusalem, which is exactly why the PA wants Israel and the new administration in Washington to agree to allow eastern Jerusalem Arabs to take part in its election. 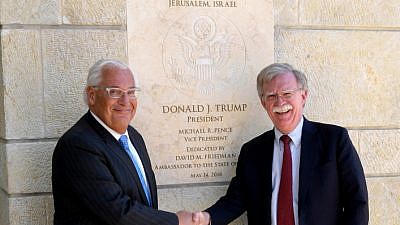 However, at least as far as Israel is concerned, there is another problem lurking in the background—Hamas’s active role in the election process. Hamas created a headache for Abbas by accepting most of his conditions for elections just so they could run. Abbas had been counting on Hamas refusing to meet his demands, but the organization decided to play his game.

Israeli officials say that it is not in Israel’s interest to allow any process that involves Hamas, a terrorist organization, as a key player—let alone one it could wind up winning. For Israel, that is not a possibility, either in Jerusalem or in Judea and Samaria.

The officials explain that the problem is two-pronged—internal, within the P.A.; and external—the position of the European Union and the United States. It turns out that it’s tough to turn back the wheel. The decision by Abbas, who has even signed presidential decrees on the matter, is already in motion, and in the P.A. there are a number of actors eagerly awaiting the elections, with their candidates revving up their motors and trying to jostle for position. 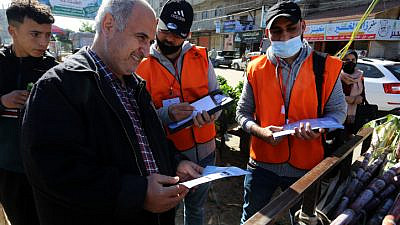 Palestinian Central Election Commission workers register citizens in preparation for the May elections, in Rafah, in the southern Gaza Strip, on Feb. 10, 2021. Photo by Abed Rahim Khatib/Flash90.

One example is senior Fatah official Jibril Rajoub, who wants the presidency and who is currently representing Abbas in talks going on in Cairo between all the Palestinian factions. A few days ago, Rajoub made it clear that the P.A. aspired to coordinate with Hamas when it came to Jerusalem, and there was a possibility that eastern Jerusalem candidates for the PLC might be determined ahead of time. Rajoub also promised that eastern Jerusalem residents would take part in the elections, even if Israel objected.

How would that work? Hanna Nasser, head of the Palestinian Central Elections Commission, explained this week that it was possible that eastern Jerusalem Arabs who hold Israeli residency might vote at polling places on the city’s outskirts, like Kafr Aqab and Ba-Ram, and possibly Abu Dis, one end of which is part of Jerusalem but most of which lies outside the city borders.

Either way, the commission has already announced that eastern Jerusalem Palestinians who hold Israeli ID cards will be able to take part in the P.A. elections without their names appearing on the voter rolls. 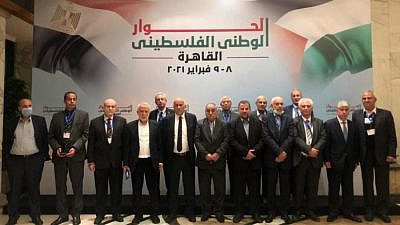 A meeting of the Palestinian factions in Cairo in February 2021. Credit: Arab Press.

Abbas is also facing pressure from E.U. states, and soon from the United States, which is already dropping hints. The Europeans see it as a simple issue: The P.A. president is being asked to hold elections to prove that the Palestinian people support him. Elections are a condition for continued financial support from the European Union and could be a condition for a renewal of U.S. aid, which was frozen under Trump. The Biden administration, which wants to coordinate with Europe, is hinting to the Palestinians that it would prefer to hold renewed peace talks with an elected Palestinian leadership rather than the leadership that has been in power—without elections—for 15 years.

Israel, meanwhile, is trying to remind the Americans quietly about how complicated the entire picture is, stressing Hamas’s strong position among the Palestinian public, including the possibility that it might win and do in the West Bank what it did in the Gaza Strip—create a terror state. An entity like that would pose a direct threat to Israel, forcing it to change its military and security activity in Judea and Samaria to adjust to the new reality. 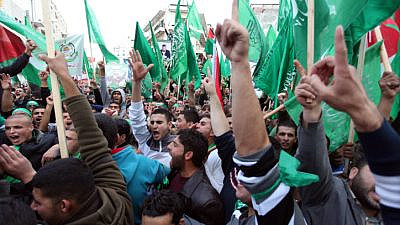 Palestinian supporters of Hamas attend a rally marking the 25th anniversary of the Islamist movement’s founding, in the West Bank town of Ramallah on Dec. 14, 2012. Photo by Issam Rimawi/Flash90.

Israel is telling its friends and anyone who is pressing for P.A. elections that it will not accept the appearance of another Gaza, this one facing Kfar Saba, Netanya and Hadera.

Hamas, for its part, is taking a passive position. Confounding Abbas’s expectations, Hamas is not insisting that the elections be held in eastern Jerusalem. The organization does not want the Jerusalem issue to torpedo the elections.

In Cairo, the Palestinian factions have been holding talks to prepare for the elections. A total of 14 organizations are taking part, the most prominent being Fatah under Rajoub, and Hamas under Salah al-Arouri and Yahya Sinwar. Delegations from the Popular Front for the Liberation of Palestine and the Democratic Front are also there. The heads of Hamas are calling on the Palestinian population in the West Bank and eastern Jerusalem to vote.

Sinwar recently put out a video clip in which he encourages voter turnout, and also threatens Israel and warns it not to intervene. Sinwar even warned that if Israel did anything to stop the elections, Hamas would interfere with the upcoming Knesset election. Hamas included footage of an Israeli election rally in Ashkelon in 2020, when Netanyahu was rushed to cover following a rocket barrage from Gaza. 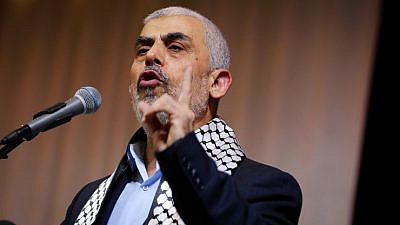 For now, there are other possibilities, different from the scenarios Sinwar is afraid of. For example, Israel might agree for a fourth time to allow eastern Jerusalem residents to vote, in exchange for political concessions. One option is that in exchange for an Israeli green light, the Biden administration will clarify, possibly in writing, that it espouses the commitments made by former President Trump to Jerusalem’s status as the capital of Israel.

Another less likely route would be for Saudi Arabia to secure an Israeli agreement in exchange for improved relations. The idea has even been formalized in a paper from the Reut Institute which argued that it would be a “win-win” for Israel, the United States and Saudi Arabia to trade eastern Jerusalemites voting in the P.A. election for Israeli normalization with the Saudis.

If Israel does agree, after its own election, to allow the Arab residents of eastern Jerusalem to vote in the P.A. election, we will likely witness a long debate about the terms and conditions of said voting, similar to those held before each of the previous three P.A. elections.