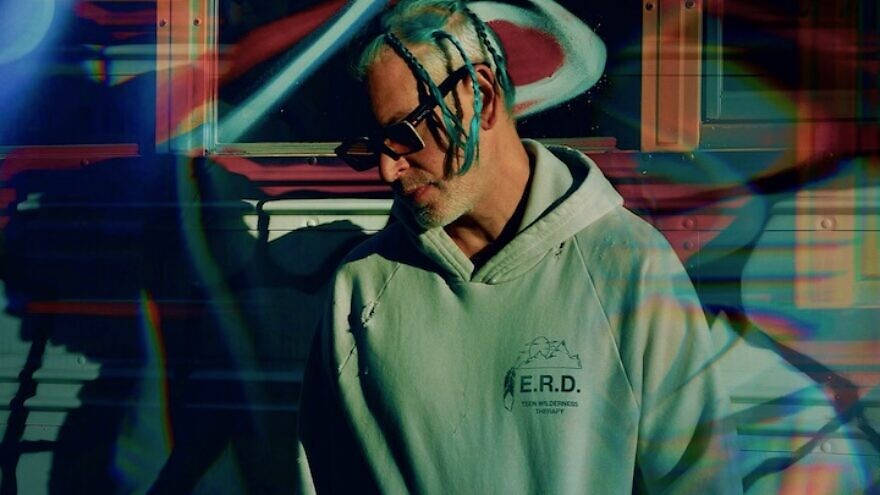 (December 7, 2022 / JNS) They say that children make you young and Matisyahu, whose real name is Matthew Miller, celebrated the birth of his sixth child, Judah Mac Miller, 11 months ago, partly named after fellow Jewish rapper Mac Miller, who died in 2018.

Matisyahu’s 2006 studio album “Youth” was nominated for a Grammy. The singer since got divorced and remarried, and his recent self-titled album is raw, confessional and introspective, telling about fighting demons, stopping drug use and connecting to his power.

He said he was proud to recently work on a song with his son Laivy. They will both perform in Miami on Dec. 14 at the Chosen Comedy Festival and Matisyahu will also have Chanukah shows on Dec. 21 and 22 at Brooklyn Bowl in the New York borough’s Williamsburg neighborhood.

“I’m definitely gonna win a Grammy, that’s definitely happening,” Matisyahu told JNS, sounding not cocky but sure of himself, like he’ll be picking up a pizza for dinner.

Matisyahu, 43, grew up in White Plains, New York, and has lived in Crown Heights, Brooklyn, and Los Angeles. He has sold five million records. But some of his fans abandoned him years ago when he decided to shave off his beard, stop wearing the black hat and black coat and become less religiously observant. Does that bother him?

He said he’s more mature now and has been able to distance himself from that moment. He said that on occasion, people can get under his skin, but that is rare. Is he out to prove anyone who doubted him wrong and show that he hasn’t ceded his spot in the limelight?

“I’ve always had the desire to be great,” he said. “I’m not run by that desire, ’cause I realize artistry comes from within and it’s not what people think of you or what they’re saying about you. That being said, I’m a human being. I’m competitive and I have real emotions inside me. I want to prove myself and I allow those feelings to have the space to exist. I don’t try to squash them. You need to have some ego sometimes, but you have to use it to your advantage and not let it take advantage of you.”

It had been five years since he released an album. “Matisyahu,” which arrived in March, has a number of excellent songs, many relating to family. “Mama Please Don’t Worry” has an infectious chorus. “Not Regular,” a great driving song, has the lyrics: “No I’m not regular/no I’m not secular.” The song was inspired by the story of Rabbi Yosef Yitzchak Schneersohn (1880-1950), the sixth Lubavitcher Rebbe, who writes in his memoirs that in Siberia, he would not respond to interrogators who thought a gun would make him talk. The rabbi wrote that he responded that the gun impresses only those who believe in one world and many gods, while he believed in one God and two worlds, and the revolver had no impact on him.

Known for hits like “King Without a Crown” which he performed on “The Late Show With David Letterman,” “One Day” and “Jerusalem,” Matisyahu said that at different points in his career he has drawn on different inspirations. First it was Chabad, with religious life as the center, then Jewish philosophy, then existential struggles and most recently, his family.

“It’s really funny because I’ve been having kids for the last 17 years,” he said. “I remember reporters asked me that question early on and I didn’t really understand it cause everything was flying all at once. But it’s been hugely impactful. So much of my writing and my time is spent around my kids of different ages and different stages of what they’re going through and what I’m going through. It’s been hugely impactful.”

Matisyahu said that after getting divorced, he was not sure that he would get married again, but that changed when he met a woman on a Pesach program in Florida where he was performing. The couple have been together for five years and have two children.

“I didn’t necessarily want to get married again,” he said. “It wasn’t on my list of things. I was looking for companionship, but I had kind of given up on the traditional notion of love. Then I met my wife in the most random situation. We were instantly close friends, and she has taught me so much.”

Asked if he has any advice for those seeking love after divorce or trying to reach a high goal professionally, he shared his own experiences.

“How a lot of things work in my life, the moments you stop chasing something it oftentimes wants to come to you,” Matisyahu said. “It’s just sometimes you stand in the way of your own blessings.”

He said early on in his career he was energized by “a vision of perfection and was super confident to project that to the world.”

But as his life changed, he hopes he’s inspired some by showing vulnerability.

As for his legendary Chanukah shows, you’d be hard-pressed to find a more intense crowd than his; this writer has attended numerous ones. He is known for impressive beatbox solos as well. “Smash Lies,” the opening track off his third studio album “Light,” is a banger you will love and the uplifting “Sunshine,” which belongs in a movie, garnered 41 million views on YouTube.

Asked if he experienced antisemitism, he said he doesn’t pay attention to anything online but felt it when he was invited to sing at a festival in Spain but then there was pressure from members of the Boycott, Divest and Sanctions movement. He was disinvited then re-invited.

“That was crazy for me, people with signs that said “Naziyahu’ you know that was intense for me,” he said. “Having security around. That was probably the worst I had to deal with. It was a whole thing if I should go back or not. I basically felt a bigger responsibility to perform. For me, it’s not just about the money and my job. To me, it’s about the responsibility I have to myself and to maybe fans who haven’t heard me yet.”

Asked about the antisemitic comments of Kanye West, now called Ye, Matisyahu said he understands that while most are outraged, some have spoken out while some don’t want to give West publicity.

“When someone is going down a certain road where they’re hurting themself, you almost don’t need to do anything, they’re doing damage to themselves,” he said. “Most people understand that the person is insane and having a crazy thing. Now I understand when someone is spreading antisemitism, it can catch. What it does, maybe, for some people, when anything gets heavily promoted and pushed out there, some who are ignorant will be attracted to it and might use it for them. People who are actually antisemitic may feel they have support, to speak up. We’ve seen this in the political climate.

“One thing I’ve learned in my life is you can’t stop what’s happening in the world. You bear witness to it, and you can certainly speak out about it and educate people, but you can’t really get in the way of what’s happening. The forces are bigger than people out of fear [who] try to stop something. People can’t control everything. People say what they want to say. It’s not rocket science,” Matisyahu continued.

“We know all the levels of antisemitism. His [West’s] is the most basic one of jealousy. It’s not that hard to figure out. We haven’t experienced anything like our ancestors have, so it’s in our DNA to start freaking out and it’s understandable. You can’t blame people for wondering, ‘At what point is everyone gonna come after us again?’ There are a lot of dynamics at work. It’s good to speak out but you don’t have to feel like you have to get in the way of a crashing wave, cause it’s gonna crash one way or the other.”

Matisyahu said that while his process has been to only release albums, sometimes taking a few years to create them, he will change things up and release music as he records it and he is especially excited about collaborating with Laivy.

Though Matisyahu is known for his soaring vocals, he also has a good sense of humor, once telling host Sway on Hot 97 FM that the idea of Jews having relations through a sheet was a “bubbe meise” or made-up story. Will he crack a joke in Miami at the Chosen Comedy Festival?